The device without a smartphone (left) and with a smartphone attached (right).Image © 2019 Rohan Mehra - Division for Strategic Public Relations

The current leading method to assess the presence of viruses and other biological markers of disease is effective but large and expensive. It is prohibitively difficult for use in many situations, especially due to certain economic and geographic factors. So researchers created and tested an alternative miniaturized system that makes use of low-cost components and a smartphone. Researchers hope the system could aid those who tackle the spread of diseases.

A virus scanner for a smartphone might not sound too exciting at first, but this virus scanner doesn’t search for the latest malware; it scans biological samples for real viruses. It is a portable, low-cost, battery-powered device and is the brainchild of researcher Yoshihiro Minagawa from the University of Tokyo. It was tested with viruses but could also detect other biological markers. 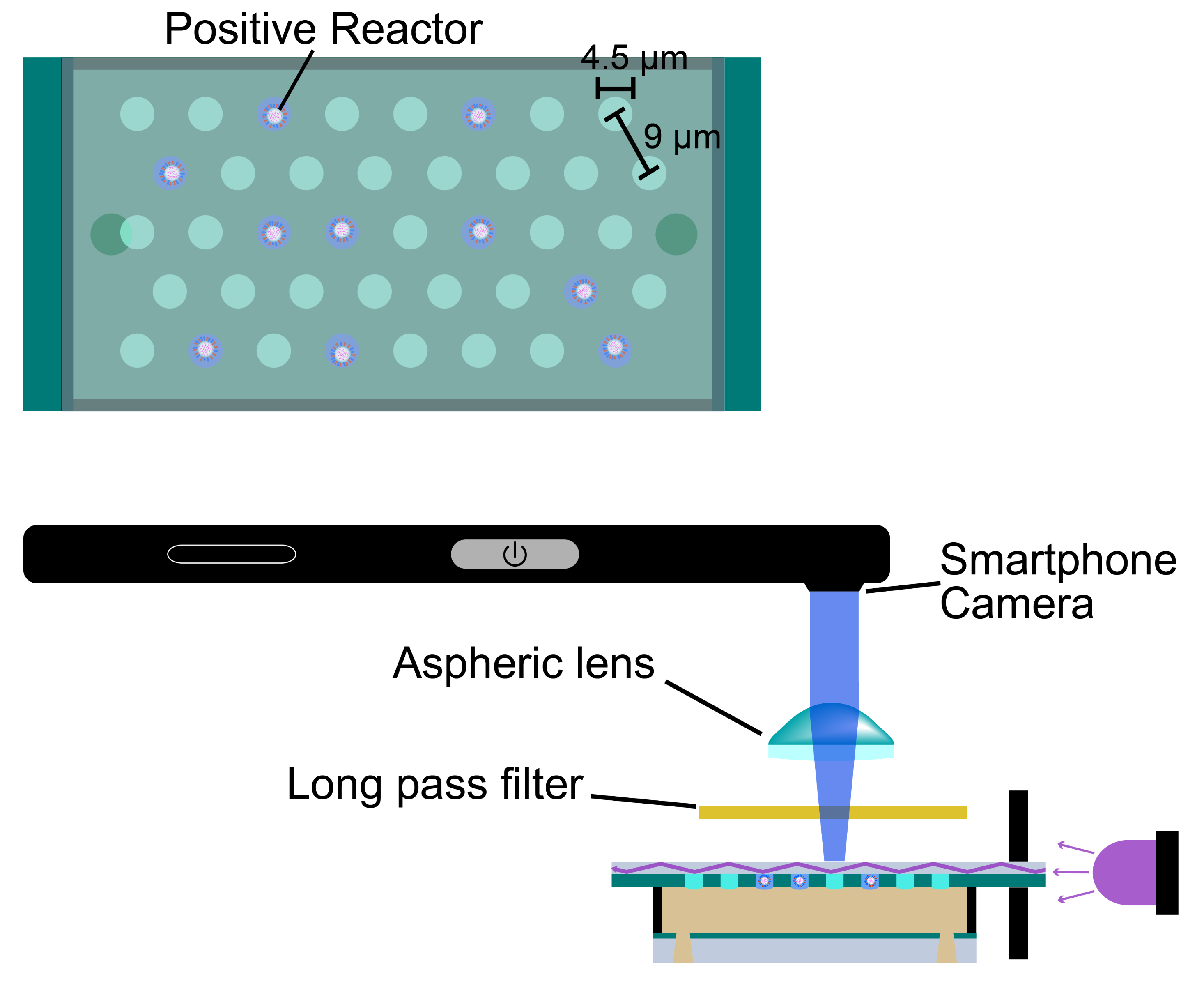 The virus-containing cavities are 4.5 micrometers across and 9 micrometers apart. Image: © 2019 Minagawa et al.

“I wanted to produce a useful tool for inaccessible or less-affluent communities that can help in the fight against diseases such as influenza,” said Minagawa. “Diagnosis is a critical factor of disease prevention. Our device paves the way for better access to essential diagnostic tools.”

Current state-of-the-art tools for detecting and counting viruses and other biomarkers, such as fluorescence microscopes, are generally large, expensive, slow and difficult to use. Although highly accurate at counting viruses, these tools are just too cumbersome for many situations, especially when rapid diagnosis is required.

“Given two equal samples containing influenza, our system detected about 60 percent of the number of viruses as the fluorescence microscope. But it’s much faster at doing so and more than adequate to produce good estimates for accurate diagnoses,” continued Minagawa. “What’s really amazing is that our device is about 100 times more sensitive than a commercial rapid influenza test kit, and it’s not just limited to that kind of virus.”

The device is about the size of a brick with a slot on top in which you place a smartphone such that its camera looks through a small lens to the inside of the device. On the screen through a custom-made smartphone app you would see what may at first glance look like a starry night sky, except those stars would in fact be individual viruses. 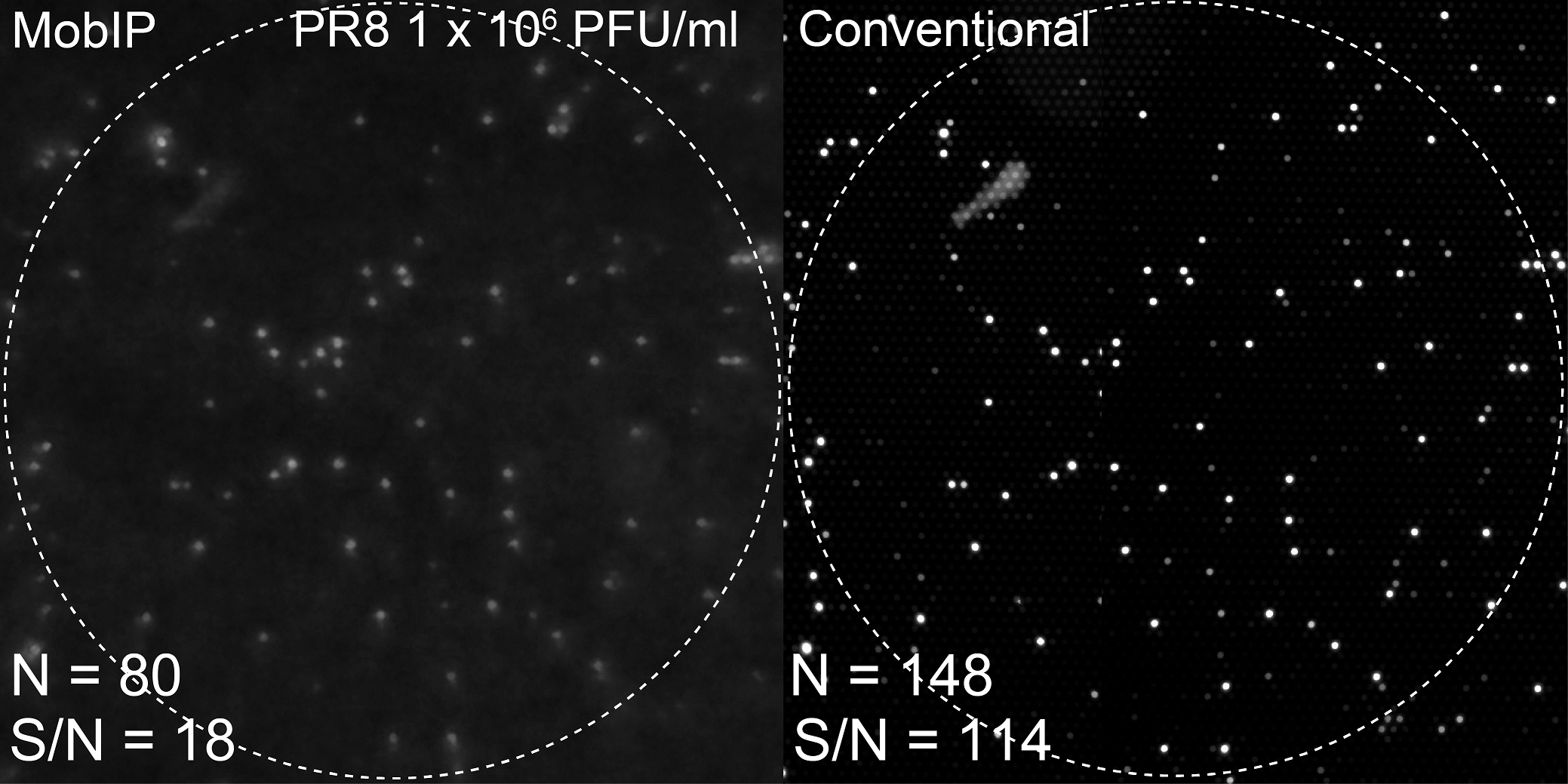 Viruses are held in place on a clear surface in tiny cavities lit with an LED. The surface and fluid surrounding it were designed so that only when a cavity has a virus inside does incident light — the light that directly hits the surface — from the LED redirect up to the camera, manifesting in a bright pixel in an otherwise dark void. Each cavity is 48 femtoliters (quadrillionths of a liter) — it would take over 10 million of these to hold a single human tear.

“This is now possible because smartphones and their embedded cameras have become sufficiently advanced and more affordable. I now hope to bring this technology to those who need it the most,” concluded Minagawa. “We also wish to add other biomarkers such as nucleic acids — like DNA — to the options of things the device can detect. This way we can maximize its usefulness to those on the front line of disease prevention, helping to save lives.”