A cube one-fortieth the size of a human red blood cell can glow when it detects flammable gas. The nanocube, designed by chemists at the University of Tokyo, is part of a research project to develop artificial systems that mimic the complex chain of events inside living cells.

The research team has worked on the nanocube project for over a decade. A key feature of the nanocube, just two nanometers on each side, is that it puts itself together, attempting to mimic the way proteins and DNA put themselves together in living cells.

“People automatically think about devices when we talk about sensors. But there are many examples of natural sensors in the body,” said Professor Shuichi Hiraoka, the lead researcher on the project from the University of Tokyo’s Department of Basic Science.

The basic chain of events in a cell to detect and report some signal has three steps: 1) A receptor detects the target molecule, 2) the receptor sends a signal to the reporter and 3) the reporter transmits the signal elsewhere in the cell.

The glowing nanocube simplifies the system because it is both the receptor (the inside of the cube) and the reporter (the glow).

“This way, we avoid the problem of transferring information from the receptor to the reporter,” explained Hiraoka. 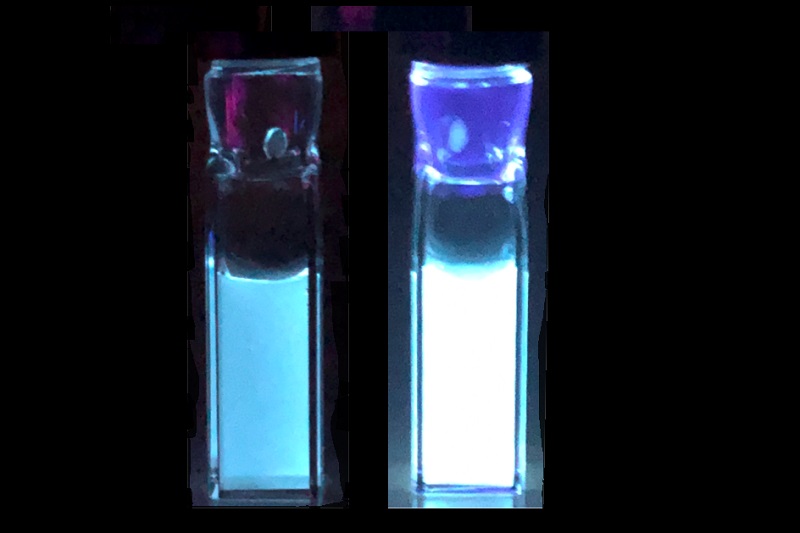 The nanocube glows blue under fluorescent light. The glow is 3.9 times brighter when the cubes are filled with flammable gas. Originally published in Communications Chemistry.

Nanocube sensors fully envelop the molecules they contain, meaning they could be especially useful for distinguishing between molecules that are shaped like simple chains of different lengths (alkanes) without unique functional groups.

The latest analysis reveals that the nanocubes glow blue under ultraviolet (UV) light when filled with liquefied petroleum gas (LPG), a type of flammable gas.

The chemical that the cube is made from is a white powder when dry, but when mixed in water, six gear- or snowflake-shaped molecules automatically connect to form the cubes. The natural glow, or fluorescence, of the nanocubes is a balance of two competing physical characteristics of those molecules: The glow is limited when the molecules are stacked like pancakes, but is enhanced when the molecules are locked in place and slightly stretched apart from each other.

Three molecules come together at each corner of the cube, so their edges are “stacked” together, limiting the glow. When the cube fills with gas, the corners bulge slightly and that stretch enhances the glow.

Researchers at the University of Tokyo have built a simple, cheap, highly sensitive and specific detector of liquefied petroleum gas (LPG). Originally published in Communications Chemistry.

The researchers built a cheap, simple gas detector using only the nanocubes, a common UV light and a fluorescent light detector.

The nanocubes are as sensitive as any current gas detector, meaning they could detect very low amounts of LPG.

However, the nanocubes are incredibly specific to LPG. They do not detect other similar types of flammable gas, such as methane (natural gas) or carbon dioxide (CO2). This specificity likely occurs because exactly three molecules of LPG slot in like blocks in the game Tetris for a perfect fit inside the nanocube.

Common gas detectors do not have this specificity and will sound an alarm for any type of dangerous gas.

“The fact that common sensors cannot distinguish these similar gases is really no problem, because they are all dangerous to us,” said Hiraoka.

Rather than to design a new gas detector, the researchers’ true goal is to mimic the complex chain of events to detect and report signals in living cells.

Researchers are planning additional projects to alter the building blocks of the nanocubes so that the cubes can detect different molecules and report different signals.