Polarized optical microscopy images of the molecules at 20 degrees (A) and 51 degrees Celsius (B). Image: © 2019 Kato et al

Many natural and synthetic chemical systems react and change their properties in the presence of certain kinds of light. These reactions can occur too quickly for ordinary instruments to see. For the first time, researchers adopted a novel technique to observe the high-speed reactions. A special kind of reaction observed with this method could lead to new optical nanotechnology.

In chemistry, molecules can be manipulated in different ways to produce different things. Isomerization, for example, is a process which changes the arrangement of a molecule but leaves constituent atoms as they are. The process is found in natural systems such as the retina of the eye, and artificial systems like certain kinds of chemical synthesis. In many cases isomerization essentially makes a particular region of molecules either more or less ordered.

Photoisomerization is a type of isomerization which is activated by light and it takes place quicker than the blink of an eye. Professor Takashi Kato from the Department of Chemistry and colleagues subjected liquid-crystal molecules of the chemical compound azobenzene to specific frequencies of UV light. The photoisomerization of a single azobenzene molecule typically occurs on a timescale of hundreds of femtoseconds (quadrillionths of a second). That’s roughly a billionth to a trillionth the time it typically takes you to blink! The researchers found the molecule then triggers molecular interactions in liquid crystals on timescales of hundreds of picoseconds (trillionths of a second).

“We have shown how to change the shape of azobenzene molecules from a straight rod shape to a slightly bent shape in a process triggered by photo-irradiation of UV light. This bending could translate to some mechanical or electronic function,” said Kato. “The reaction propagates through neighboring molecules in the sample, meaning it is an extremely efficient process.”

This reaction does not take place in isolation, however; it occurs within a sample of soft matter the function of which depends on the constituent molecules and their behaviors. In this case, soft matter could mean anything from an artificial muscle to flexible photographic sensors or even things not yet imagined. The important fact is that the initial reaction which typically takes only hundreds of femtoseconds initiates a response in the surrounding soft matter in around a hundred picoseconds, and does so efficiently. 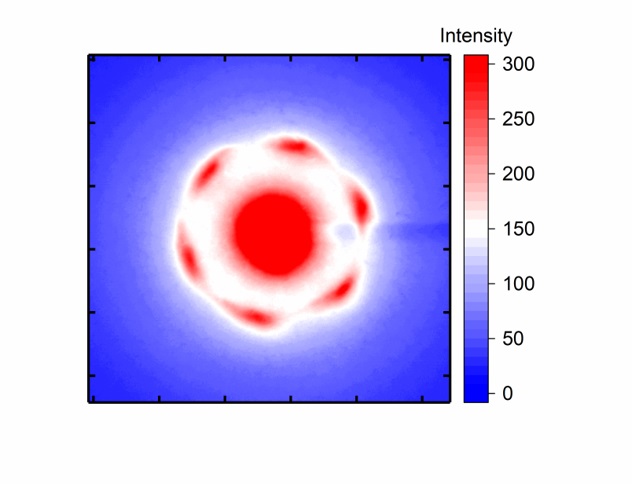 “This is the fastest intermolecular motion ever observed within soft matter. In fact what we wanted to observe was so fast we had to use some very specialized methods to acquire data and to visualize what took place during these miniscule timeframes,” continued Kato. “This would not have been possible without some unique handmade spectral instruments made by my colleague Associate Professor Masaki Hada from the University of Tsukuba.”

The methods are known as ultrafast transient transmission spectroscopy, which is an accurate way to record the makeup of a molecular sample, and ultrafast time-resolved electron diffraction, which is analogous to an X-ray and is how images of the reaction were observed. Note that both methods are called “ultrafast,” which just goes to show other methods would have been insufficient to capture data with the time resolution the researchers desired.

“I have worked on ordered molecular assemblies such as self-assembling systems for more than 35 years as a chemist since I was a graduate student. This research advances the fundamental chemistry of photoresponsive molecules in soft matter as well as their ultrafast photomechanical applications,” concluded Kato. “It is a real privilege for myself and colleagues to work on this kind of project. We hope this may contribute to the design of molecular-based materials such as soft-body mechanisms and photo-functional materials.”