Chemists have mapped the reaction process where two types of molecules become either an ultrathin sheet (left) or a spherical cage (right) depending on the absence or presence of a third molecule, a negatively charged nitrate anion (red ball). If nitrate is added to the sheet, the molecules rearrange to form spherical cages. Image by Shuichi Hiraoka, CC-BY-ND.

Two pathways diverged in a chemical synthesis, and one molecule took them both. Chemists at the University of Tokyo have studied how molecular building blocks can either form a spherical cage or an ultrathin sheet that shows some of the basic properties of a “smart” material that can respond to its environment.

“This molecule is interesting because it builds different structures depending on the conditions when it reaches the bifurcation point of its synthesis,” said Professor Shuichi Hiraoka from the Department of Basic Science. Hiraoka’s research interests are about how molecules put themselves together, including DNA in living cells or micelles, found in both nature and the cosmetics industry.

The bifurcation point is a “fork in the road” of the chemical synthesis pathway where the same precursor molecules can connect in two different ways to eventually form different final structures. In the present reaction, the precursors take different paths depending on the presence or absence of a third molecule.

The precursor molecules are palladium metal atoms and an organic molecule — 1,4-bis(3-pyridyloxy)benzene — made from three rings that can easily swing between an S-shape and C-shape orientation.

The third molecule whose presence or absence influences which path the precursors take is a negatively charged anion molecule (either nitrate or triflate).

In the presence of the anion, the organic molecule takes the C-shape and one at a time, four of those C’s link together into two O-rings, locking the anion in a spherical cage. Two palladium atoms latch the four C’s together at the top and bottom of the cage.

If the anion is absent, the organic molecule swings into the S-shape and connects together with other S-shaped molecules using the palladium atoms as links. Eventually, they form flat sheets about 4 nanometers thick and up to 5 micrometers in diameter.

In these microscopy images, empty wells are seen in the transmission electron microscopy grid (left) and the thin sheet is visible stretching over the same wells (right) after the reaction is complete. Image by Shuichi Hiraoka, CC-BY-ND.

However, when researchers add the anion to the completed sheet, the molecules will slowly rearrange themselves into the cage formation.

“The sheet is demonstrating some very primitive qualities of a so-called smart material — one that can sense and respond to its environment. This shift from the micrometer-sized sheets to the nanometer-sized cages is a very dramatic structural change,” said Hiraoka.

The research team hopes that their work to understand the fundamental chemical properties of these molecules will lead to the possibility of designing molecules that can self-assemble and independently reorganize depending on environmental conditions.

Paths depend on thermodynamics and kinetics 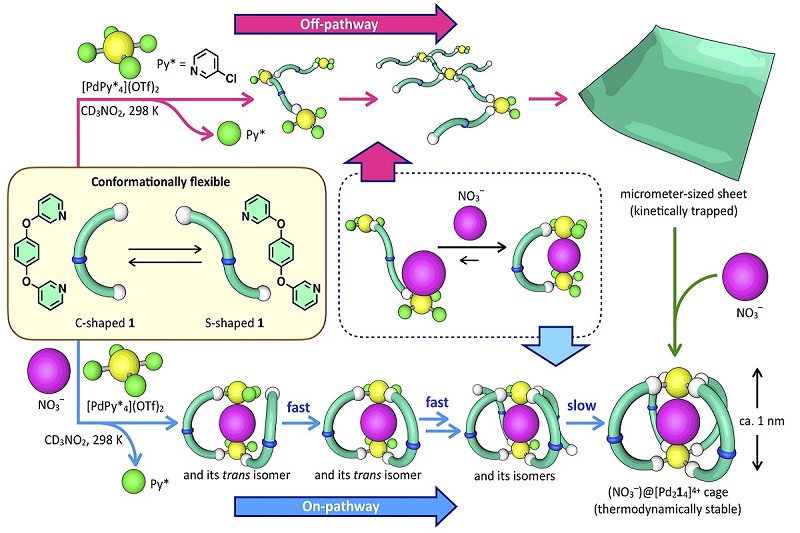 The sheet and cage formations are more chemically stable in different ways. The cage formation is more thermodynamically stable, meaning it would require energy to move out of that formation. The sheet is more kinetically stable than the cage, meaning the molecules are slow to change position. Researchers are excited to have developed an artificial system that contains the complexities of these different stabilities.

Proteins in living organisms are usually kinetically trapped to stay in their healthy formations even though it would be more thermodynamically stable to aggregate into useless clumps.

In the artificial system that Hiraoka’s research team studied, when the precursor molecules form cages, the molecules stay in that final position because it is the lowest thermodynamic energy arrangement.

“The reaction in the early stage to form the cage is very fast, which tells us that the anion is acting as a kinetic template for the precursors to form the cage,” said Hiraoka.

However, the reaction to form the sheet proceeds more slowly and researchers say that the molecules become kinetically trapped in the sheet formation without the presence of the anion to provide a template that pulls them into the cage formation.

Researchers plan to continue studying how the self-assembly pathway is controlled and how to manipulate the influence of the kinetic effect and thermodynamic stability.