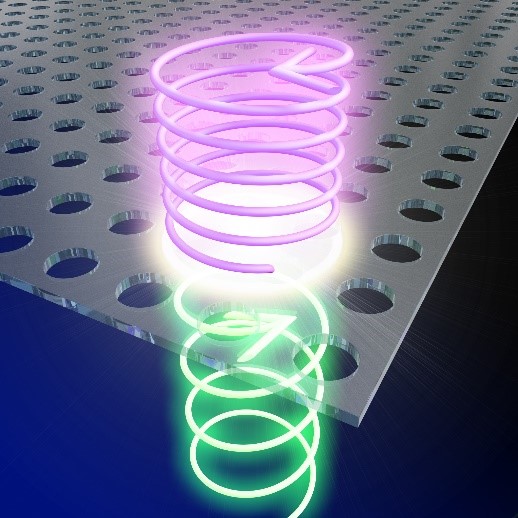 Twisted light. Circularly polarized laser light goes through the PCN device and comes out the other side as VUV polarized in the opposite direction. Image © 2020 Konishi et al.

Spectroscopy is the use of light to analyze physical objects and biological samples. Different kinds of light can provide different kinds of information. Vacuum ultraviolet light is useful as it can aid people in a broad range of research fields, but generation of that light has been difficult and expensive. Researchers created a new device to efficiently generate this special kind of light using an ultrathin film with nanoscale perforations.

The wavelengths of light you see with your eyes constitute a mere fraction of the possible wavelengths of light that exist. There’s infrared light which you can feel in the form of heat, or see if you happen to be a snake, that has a longer wavelength than visible light. At the opposite end is ultraviolet (UV) light which you can use to produce vitamin D in your skin, or see if you happen to be a bee. These and other forms of light have many uses in science.

Within the UV range is a subset of wavelengths known as vacuum ultraviolet light (VUV), so called because they are easily absorbed by air but can pass through a vacuum. Some VUV wavelengths in the region of around 120-200 nanometers (nm) are of particular use to scientists and medical researchers as they can be used for chemical and physical analyses of different materials and even biological samples.

However, there is more to light than a wavelength. For VUV to be truly useful, it also needs to be twisted or polarized in a manner called circular polarization. Existing methods to produce VUV, such as using particle accelerators or laser-driven plasmas, have many drawbacks, including cost, scale and complexity. But also, these can only produce untwisted linear polarized VUV. If there was a simple way to make circular polarized VUV, it would be extremely beneficial. Assistant Professor Kuniaki Konishi from the Institute for Photon Science and Technology at the University of Tokyo and his team may just have the answer. 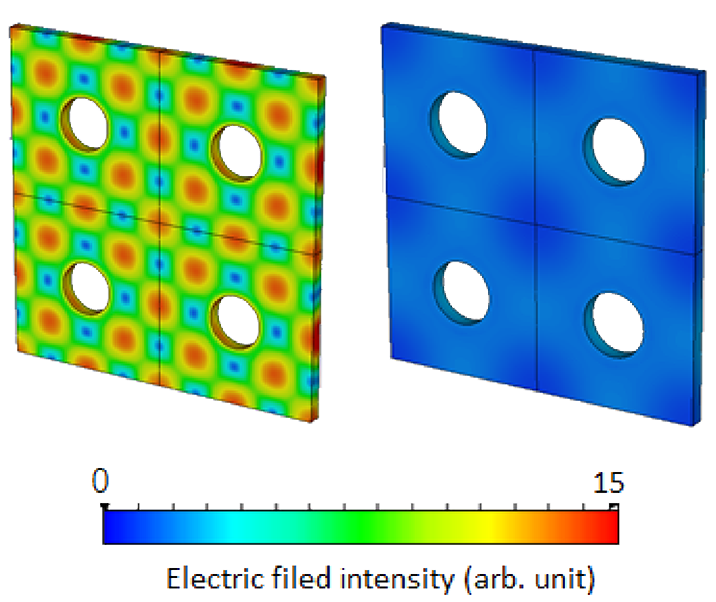 “We have created a simple device to convert circularly polarized visible laser light into circularly polarized VUV, twisted in the opposite direction,” said Konishi. “Our photonic crystal dielectric nanomembrane (PCN) consists of a sheet made from an aluminum oxide-based crystal (ℽ-Al2O3) only 48 nm thick. It sits atop a 525 micrometer-thick sheet of silicon which has 190 nm-wide holes cut into it 600 nm apart.”

To our eyes the PCN membrane just looks like a flat featureless surface, but under a powerful microscope the pattern of perforations can be seen. It looks a little like the holes in a showerhead which increase the water pressure to make jets.

“When pulses of circularly polarized blue laser light with a wavelength of 470 nm shine down these channels in the silicon, the PCN acts on these pulses and twists them in the opposing direction,” said Konishi. “It also shrinks their wavelengths to 157 nm which is well within the range of VUV that is so useful in spectroscopy.”

With short pulses of circularly polarized VUV, researchers can observe fast or short-lived physical phenomena at the submicrometer scale that are otherwise impossible to see. Such phenomena include the behaviors of electrons or biomolecules. So this new method to generate VUV can be useful to researchers in medicine, life sciences, molecular chemistry and solid state physics. Although a similar method has been demonstrated before, it produced less useful longer wavelengths, and did so using a metal-based film which is subject to rapid degradation in the presence of laser light. PCN is far more robust to this.

“I am pleased that through our study of PCN, we found a new and useful application for circularly polarized light conversion, generating VUV with the intensity required to make it ideal for spectroscopy,” said Konishi. “And it was surprising that the PCN membrane could survive the repeated bombardment of laser light, unlike previous metal-based devices. This makes it suitable for lab use where it may be used extensively over long periods. We did this for basic science and I hope to see many kinds of researchers make good use of our work.”