Cells’ responses to electrical shocks are measured as the amount of calcium ions that pass through their membranes (left). Each cell’s response to the stimulation was different, but its unique response was consistent every time it was shocked (center). Researchers state that an individual cell’s response is accurate, represented by the very small black error bars (right). © 2020 Shinya Kuroda, All Rights Reserved

Minute differences in individual muscle cell contractions allow the entire muscle to flex with greater control and accuracy. Long dismissed as “noise” or error, experts now suspect that biological systems may have evolved to include unavoidable variation as a form of information in their communication channels. A team of experts from the University of Tokyo published these findings in the scientific journal Cell Reports.

“The differences between cells’ responses to stimulation is actually another form of information,” said Professor Shinya Kuroda, leader of the research lab that performed the experiments at the University of Tokyo Graduate School of Science and a co-author of the recent research publication.

Although robots might be designed to respond identically in unison, each cell in a natural system contains all manner of idiosyncrasies, such as unique patterns of gene expression. Each cell in a muscle receives the same nerve signal to contract or relax, but one cell might respond with a strong contraction while its neighbor responds with a weak contraction. The scientific community previously suspected that these variations were caused by information being lost along the communication channel.

“Previously, no one had the technical ability to do these repeated measurements of single cells,” said Project Research Associate Takumi Wada, first author of the recent research publication.

“We observed that each cell is quite good at responding to the stimulation accurately. They are simply different,” said Kuroda. 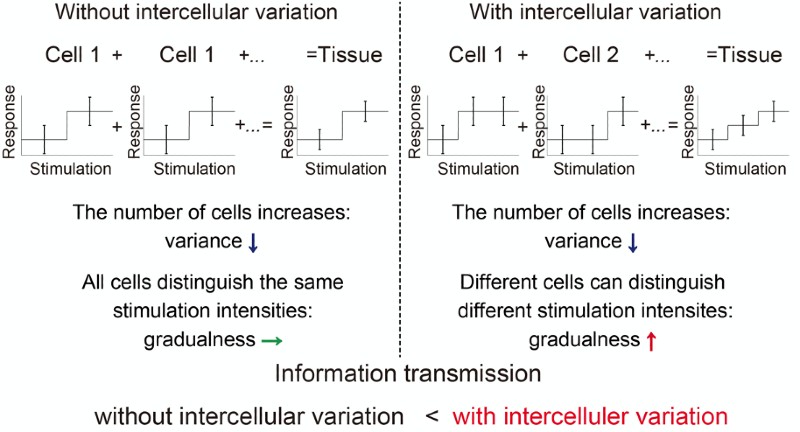 Tissues with cell-to-cell variability have more gradual responses to stimulation because different cells can respond to the full range of stimulation intensity. © 2020 Shinya Kuroda, All Rights Reserved

Reliable and accurate responses to all levels of stimulation ensure that cells’ differences remain consistent and therefore meaningful, rather than unpredictable and chaotic. The variation between cells means that, as a whole, the muscle tissue can detect a wider range of stimulation intensities and can respond with a corresponding wider range of control. If all cells responded identically, the whole muscle tissue could only perform on/off binary responses.

This concept of individual cell variability communicating essential information through biological systems may also be relevant to other processes where life requires a wide spectrum of responses, like hormone secretion. For example, the pancreas may be able to release different amounts of insulin hormone due to individual beta cells of the pancreas responding differently to blood sugar levels.