Synthetic chemistry is a field of study related to the creation and exploration of new substances and materials that do not exist in nature. Sometimes a specific property or behavior of a material is required for an application such as pharmaceutical or high-tech manufacture. Synthetic chemistry can help find, create or refine suitable materials. For example, so-called synthetic liquid crystal membranes could be used for water filtration.

When filtering water or other liquids, the aim is to separate chemical components, such as ions, from your target fluid. Use of a porous membrane can be the primary method for doing this. It’s intuitively obvious that holes in a surface will stop anything larger than the hole from passing through. But advanced membranes like synthetic liquid crystal membranes can have pores that are barely a few nanometers, billionths of a meter, across. At these scales, there’s more to membrane functionality than just the size of a pore.

“Chemistry plays a big part in what happens at these small scales,” said Professor Takashi Kato from the Department of Chemistry and Biotechnology at the University of Tokyo. “In the case of water filtration, the pores are sized to let nothing larger than water pass through. However, there are also electrostatic forces between ions and pores. If the material is engineered correctly, these forces serve as a further barrier to ions even if they’re smaller than the pores. This is fairly well-understood. But there is yet another important substance at play that can impact water filtration, and that’s actually the water molecule itself.”

Professor Yoshihisa Harada from UTokyo’s Institute for Solid State Physics and his team had set out to fully describe what has long been suspected but has never been explained before: how water molecules at the site of a pore interact with surrounding water molecules and ions. This is actually very significant at this minute scale, where even subtle forces can impact the overall performance of the filtration membrane. It is also extremely difficult to extract this kind of information from the physical systems.

“In theory we could use computer simulations to accurately model how water behaves and interacts during filtration, but such simulations would require vast amounts of supercomputing power,” said Harada. “So at least initially, we turned to a physical method to explore these mechanisms, called synchrotron-based high-resolution soft X-ray emission spectroscopy. This itself was an extremely complex challenge.”

This process works by taking X-ray emissions from a synchrotron, a particle accelerator, and directing them to the sample under analysis. The sample, in this case the membrane and water molecules, alters some characteristics of the X-ray beam, before it is detected and recorded by a high-resolution sensor. The changes imposed on the X-ray beam tell researchers what was happening within the sample to a high degree of accuracy.

“It’s not easy,” said Harada. “Due to the thinness of the membranes, the signals we expected from the target water molecules in the pores are hard to differentiate from the background signals due to the bulk of other water molecules. So we had to subtract the background-level signals to make our target signals more visible. But now I am pleased that we can present the first-ever description of water acting as part of its host material. By performing this kind of basic science, we hope it provides tools for others to build on.”

The team’s new models describe how water molecules’ interactions are modulated by charged particles in close proximity. In membrane pores, water molecules modulated in a certain way preferentially bond with other modulated water molecules in the volume. A dynamic system like this, where a change in some property causes further change in that same property, is known as a feedback loop. Although they can seem mathematically complicated, these models can help engineers create new and effective filtration methods.

“Liquid crystal membranes already have perfectly sized pores, whereas previous kinds of membranes were more varied,” said Kato. “Combined with our new knowledge, we aim to create membranes that are even more selective about what they let through than anything that has come before. These could do more than purify water; they might be useful in, for example, construction of lithium-ion batteries, as electrolytes that transport lithium ions between electrodes, and even as a virus filter. As these membranes are so highly selective, they could be tuned to only block very specific things, meaning they could also be used for long periods before becoming saturated.”

There are several areas Harada, Kato and their colleagues wish to explore further. These initial physical experiments will inform computer models, so advanced computer simulations are one such area. But they also wish to look at cell membranes which naturally mediate the passage of ions such as potassium and sodium — studying these could help improve artificial membranes, too.

“What is exciting here is how chemistry, physics and biology combine to elucidate such seemingly complex things,” said Harada. 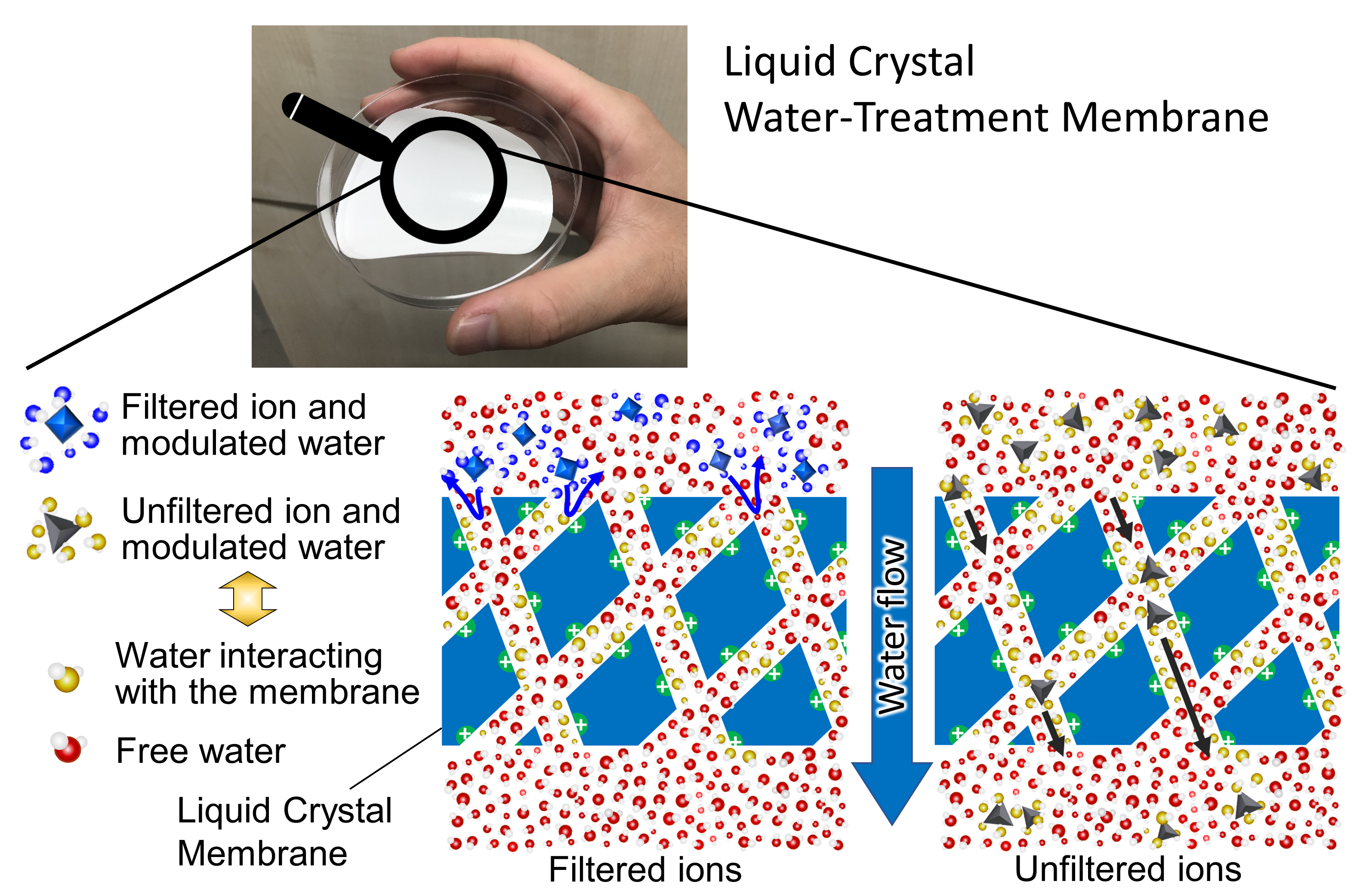 Subnanoporous membrane. The subnanoporous liquid-crystalline water treatment membrane can be highly selective about what it lets pass through. © 2020 Kato and Harada et al.