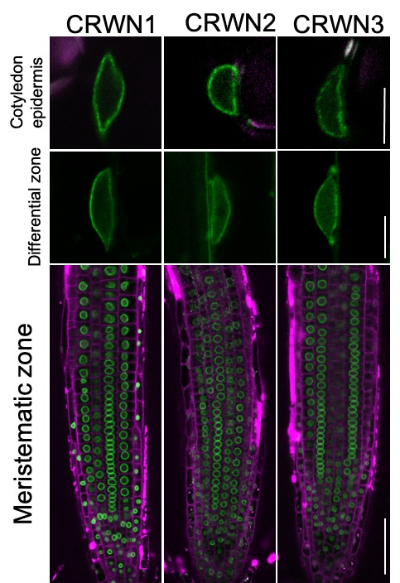 Researchers at the University of Tokyo have identified how the architecture of the cell nucleus can change gene activity in plants. This discovery reveals fundamental knowledge about genome regulation and points towards future methods for potentially manipulating the expression of many genes simultaneously.

The long strands of DNA and the protein machinery needed to turn gene expression on or off are contained, floating within the nuclei of cells. The nucleus is essentially a sack made of a flexible, double-membrane envelope that is supported by an inner, fine-mesh frame of proteins called the nuclear lamina.

“DNA does not drift aimlessly within the nucleus. We expect that there is nonrandom spatial positioning of genes around the nuclear lamina,” said Professor Sachihiro Matsunaga who led the research project from the University of Tokyo Graduate School of Frontier Sciences, recently published in Nature Communications.

Gene regulation is often studied at the one-dimensional level of reading the DNA sequence. Additional layers of gene regulation exist in 3D by changing the shape of the DNA strand. Examples include the epigenetic code that dictates how tightly to wind up the strands of DNA and the phenomenon of “kissing genes,” where distant segments of the DNA strand fold together and change the activity of the genes that touch each other.

The scientific community has long known that the shape and size of the nucleus can fluctuate dramatically during a cell's life and that these changes can even be timed as an “internal clock” to determine the age of a cell. However, these discoveries have been made using animal cells. Plants do not possess any genes evolutionarily related to the genes responsible for the nuclear lamina in animals.

“Textbooks usually have a few sentences about animal lamina, but nothing at all to say about plant lamina,” said Matsunaga.

Prior work in 2013 by some members of the research team identified a group of four proteins known as CROWDED NUCLEI (CRWN) as the most likely components of the plant nuclear lamina. 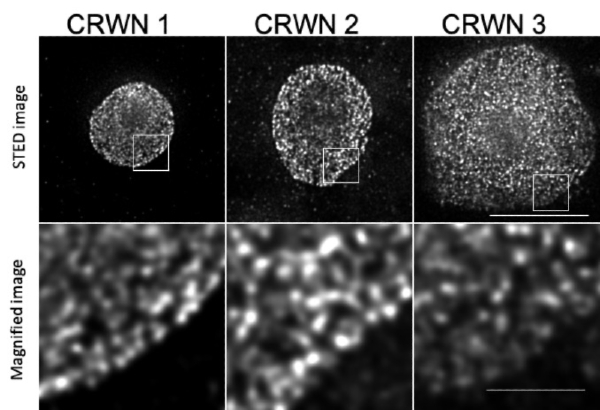 Three plant cell nuclei show the weblike network of proteins that make up the nuclear lamina, which supports the shape of the nucleus from the inside. These images were produced with stimulated emission depletion (STED) microscopy, a super-resolution technique. Scale bars = 5 micrometers (top) and 1 micrometer (bottom). © Yuki Sakamoto, CC BY

To confirm the presence of CRWN proteins in the lamina, researchers first attached fluorescent tags onto the proteins and isolated nuclei out of root cells from young thale cress plants, the roadside weed commonly used in research labs. Then they measured the proteins’ location in ultrahigh-resolution microscopy images.

These extremely zoomed-in images show weblike patterns formed by the CRWN proteins around the shell of the nucleus.

Healthy plant cells have an oval-shaped nucleus, looking like a large egg in the center of the cell. Plants genetically altered to lack CRWN proteins have nuclei that are smaller and rounder than normal, likely creating a more crowded environment for the DNA inside.

Researchers then screened the genetically altered plants to see if any other genes had different activity levels when crwn genes were inhibited. Multiple genes known to be involved in responding to copper were less active, indicating that somehow the nuclear lamina is connected to copper tolerance.

Plants that lack CRWN proteins grow shorter than healthy plants even in normal soil. Thale cress with inactive crwn genes planted in soil with high copper levels grew even smaller with a significantly weaker appearance, further evidence that the nuclear lamina has a role in plants’ response to environmental stress. 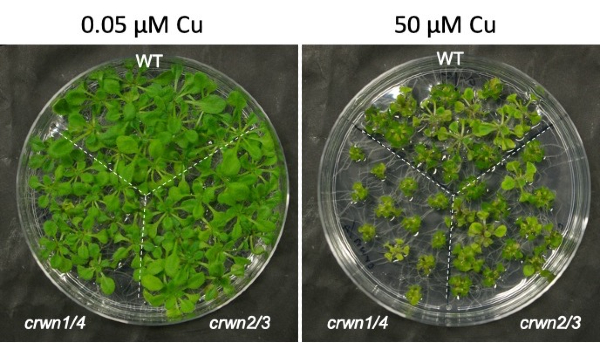 Plants genetically modified to inhibit two of the four genes responsible for the nuclear lamina (crwn1/4 and crwn2/3) can survive in low copper conditions (left), but are significantly smaller and weaker in high copper conditions (right) compared to healthy plants (WT). © Yuki Sakamoto, CC BY

“If the plant nucleus has distinct regions for active transcription of DNA, it is likely that those regions will be near the nuclear lamina. This is important and interesting because it is opposite to animal cells, which we know have active regions in the center of nuclei while the periphery is inactive,” said Matsunaga.

Most gene editing technologies to increase or decrease gene activity work directly at the one-dimensional level of altering the DNA sequence of the individual gene. Understanding how the nuclear lamina affects gene expression could reveal future methods for altering the activity of many genes at the same time by resculpting the genome and nuclear lamina.