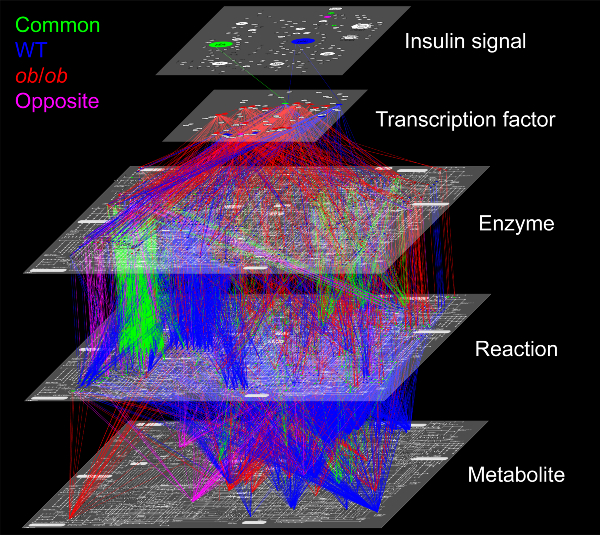 Healthy cells and cells with Type 2 diabetes use completely different pathways to manage blood sugar levels, according to results from a study in mice. Researchers used a trans-omic approach, combining data from genes (transcriptomics) and metabolites (metabolomics) to identify and connect the many separate processes involved in responding to glucose.

“Many regulatory pathways for diabetes are already well known. What we have done is map the total landscape of diabetes regulation,” said Professor Shinya Kuroda, leader of the Systems Biology Lab at the University of Tokyo. Kuroda’s team previously mapped the different cell signaling pathways activated in response to high or low concentrations of insulin.

“We expected only small differences between the healthy and diabetes regulatory network, but we found they were totally different,” said Kuroda.

Obese mice lack most of the rapid response to glucose found in healthy metabolism, instead relying on much slower methods like changing gene expression.

After eating a meal or sugary drink, insulin triggers cells to allow glucose molecules to move from the blood into cells, where glucose is broken down and converted into energy. In Type 2 diabetes, cells become insensitive to insulin, so glucose remains in the blood causing prolonged high blood sugar levels known as hyperglycemia.

Decades of diabetes research have revealed that many signaling pathways become active when glucose is inside the cell. Many of those paths involve enzymes and small molecules called metabolites, which are themselves products of metabolic pathways.

Kuroda’s team studied healthy mice and a strain of mouse with a genetic mutation that causes the mice to overeat and develop diabetes in adulthood. All mice drank sugary water and then researchers waited between 20 minutes to four hours before taking blood samples and dissecting their liver. The liver is a major site of glucose metabolism in both mice and humans.

Researchers used a wide range of experiments to identify molecules that changed in response to glucose.

After collecting the data, researchers searched scientific databases for information about any glucose-responsive molecule they had identified in their measurements. Knowledge in the databases allowed researchers to connect these individual molecules to networks of intercellular signaling pathways.

Trans-omics allows researchers to turn a long list of discrete measurements into a wide web of knowledge about how cells reacted to glucose.

The analysis was complicated by the fact that scientific databases are highly specialized, with different databases dedicated to individual types of molecules. For example, a database about genes is not connected to a database about enzymes.

“Now that the pipeline is defined, we can complete the data analysis and trans-omic network construction in one to two years,” said Kokaji.

Color-coding the glucose-responsive molecules that were measured in healthy or obese mice revealed the vastly different signaling paths they use.

Healthy mice rapidly respond to glucose using enzymes and metabolites produced as byproducts of glucose metabolism, returning to normal blood sugar levels in about one hour.

Obese mice lack most of this rapid response, instead changing the expression of some genes over several hours and producing different molecules to cope with the glucose.

This slower and very different approach in obese mice fits the typical understanding of diabetes as the global impairment of metabolic control. Additionally, the approach used in obese mice requires cells to expend more energy compared to the specific and specialized paths activated in healthy cells.

Researchers hope that the data contained in the trans-omic network will allow the research community to find new cell signaling pathways to explore, both generally and for glucose-specific metabolism.

The research team plans to continue their trans-omic analysis of glucose response by adding additional layers of information to the network and studying glucose response in other cell types that consume large amounts of glucose, such as muscle cells.