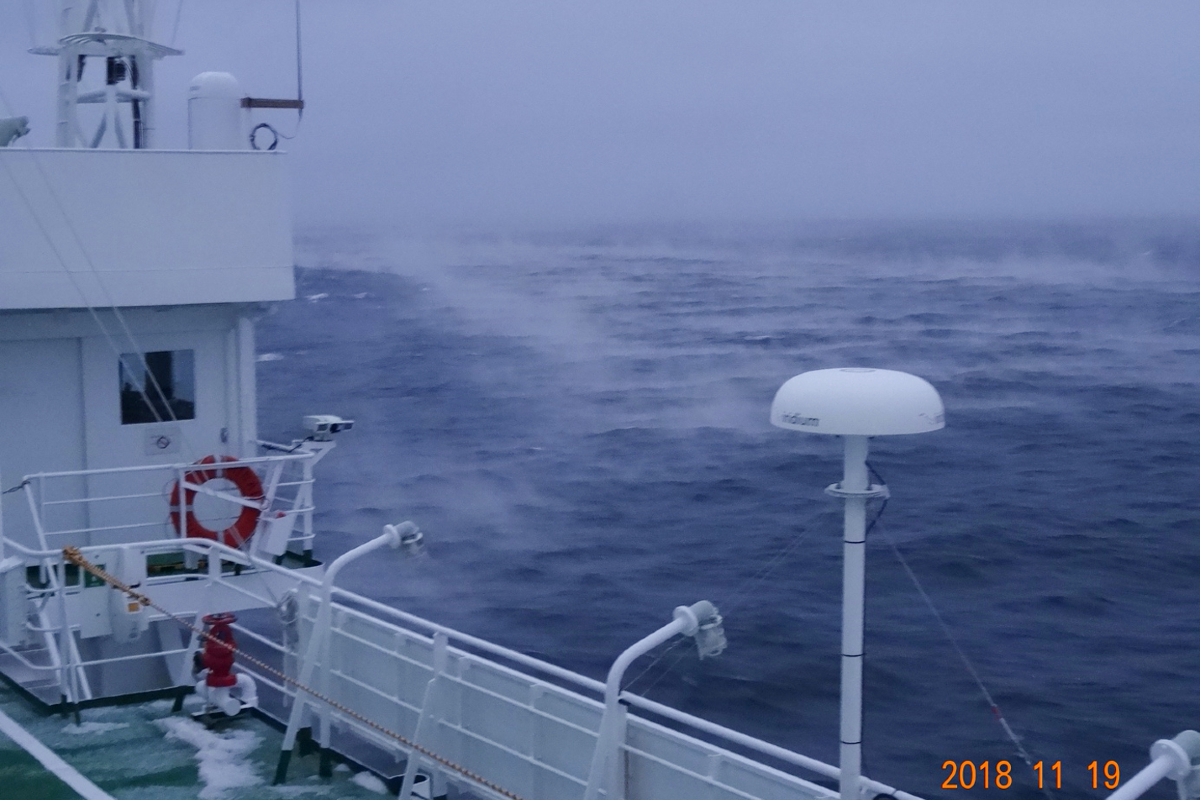 Researchers aboard the research vessel Mirai watched water vapor rise from the Chukchi Sea, resembling the mist that rises from a hot bath in a cold room. The Pacific Ocean brings relatively warm 2-degree Celsius water into the Arctic Ocean, where much colder minus 10-degree Celsius winds blow across the surface. © Jun Inoue, National Institute of Polar Research, CC BY-SA.

Experts in Japan recently discovered that atmospheric conditions near Alaska can affect sea ice conditions in the Arctic Ocean months later. The team used various data, including ship-based data from 2018, to uncover how a single atmospheric event over the northern Pacific Ocean caused significantly delayed sea ice formation in the Pacific Arctic region.

“Global warming is going on, so the global mean surface air temperature is increasing, but compared to that trend, the Arctic is warming twice or more as fast,” said Assistant Professor Tsubasa Kodaira, first author of the recent research publication and an expert in applied physical oceanography from the University of Tokyo.

One important heat source in the Arctic is warm Pacific seawater. The seawater flows northward into the Bering Sea, then through the narrow, 85-kilometer wide opening of the Bering Strait into the Chukchi Sea and onward into the Arctic. Researchers aboard the research vessel Mirai in November 2018 recorded water conditions for 12 consecutive days while sailing along the edge of sea ice in the Chukchi Sea. Despite ideal atmospheric conditions for sea ice formation, researchers recorded that the water surface remained unusually warm and ice-free.

The delay of sea ice formation in 2018 was remarkable even in an era of climate change turning extreme weather into regular events. Sea ice coverage of the Chukchi Sea remained 20% less from Nov. 13 through Dec. 4, 2018, compared to the average from 2002 to 2017.

The research team looked specifically at monthly sea surface temperatures from August through November in every year. Typically, seawater temperature cooled by about two degrees each month as summer fades to winter. In 2018, the temperature remained the same as August in September.

“So, something was happening in summer to create the unusual warm seawater observed by Mirai in November 2018,” said Kodaira.

Kodaira’s team estimates that these winds led to 70% more water than average flowing from the Pacific into the Arctic.

“This large volume of additional warm Pacific water was likely what prohibited sea ice advance towards the south in November 2018,” said Kodaira.

Researchers regard the September 2018 Bering Sea atmospheric blocking event as unusual because although such events are common in the region during the winter, they are significantly less common in the summer and autumn.

The unusual atmospheric blocking in September and remarkably delayed sea ice formation in November occurred during a year with a neutral PDO index. The study of Kodaira’s team also showed that seawater temperatures increase by a full 1 degree Celsius during a positive phase of PDO index.

The Pacific Arctic region, including the Chukchi Sea, was previously known to have experienced a significant reduction of summer sea ice and this new study has demonstrated one mechanism of how sea ice formation can be delayed. The researchers hope that their new findings will lead to better predictions of Arctic sea ice formation, benefiting global weather forecasting and predictions of local Arctic ecosystem health.