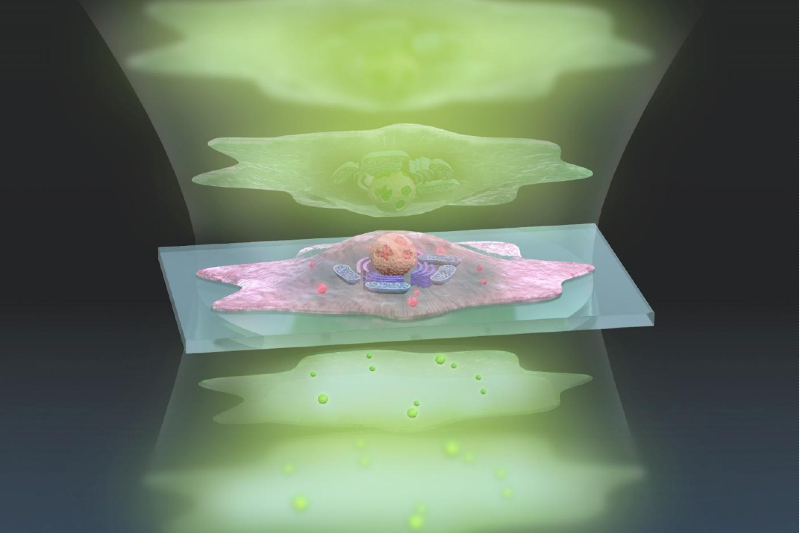 This artistic representation of the ADRIFT-QPI technique shows pulses of sculpted light (green, top) traveling through a cell (center), and exiting (bottom) where changes in the light waves can be analyzed and converted into a more detailed image. © s-graphics.co.jp, CC BY-NC-ND

Experts in optical physics have developed a new way to see inside living cells in greater detail using existing microscopy technology and without needing to add stains or fluorescent dyes.

Since individual cells are almost translucent, microscope cameras must detect extremely subtle differences in the light passing through parts of the cell. Those differences are known as the phase of the light. Camera image sensors are limited by what amount of light phase difference they can detect, referred to as dynamic range.

“To see greater detail using the same image sensor, we must expand the dynamic range so that we can detect smaller phase changes of light,” said Associate Professor Takuro Ideguchi from the University of Tokyo Institute for Photon Science and Technology.

The research team developed a technique to take two exposures to measure large and small changes in light phase separately and then seamlessly connect them to create a highly detailed final image. They named their method adaptive dynamic range shift quantitative phase imaging (ADRIFT-QPI) and recently published their results in Light: Science & Applications. 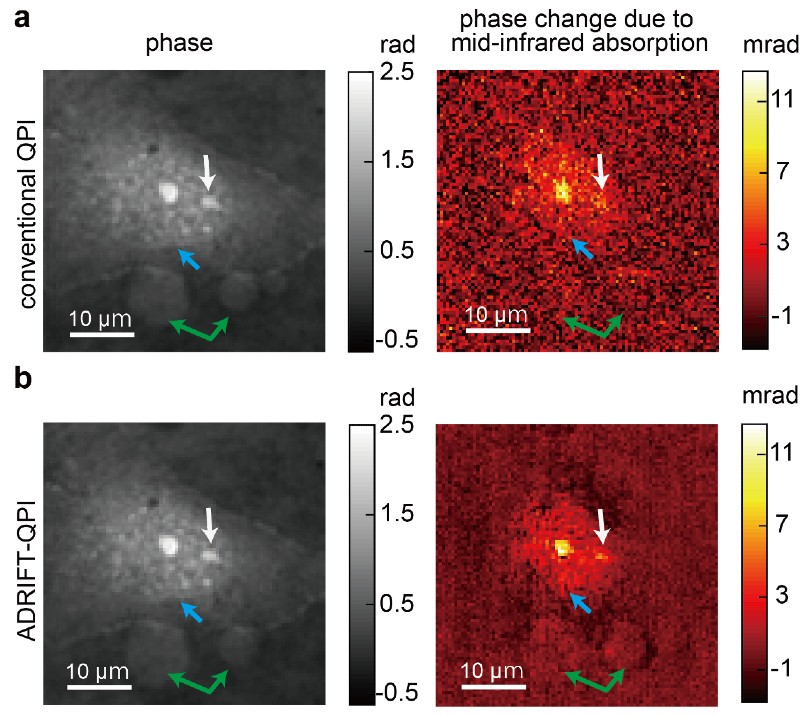 A standard image (top) taken using conventional quantitative phase imaging and a clearer image (bottom) produced using a new ADRIFT-QPI microscopy method developed by a research team at the University of Tokyo. The photos on the left are images of the optical phase and images on the right show the optical phase change due to the mid-infrared (molecular specific) light absorption mainly by protein. Blue arrow points towards the edge of the nucleus, white arrow points towards the nucleoli (a substructure inside the nucleus), and green arrows point towards other large particles. © Toda et al., CC BY

“Our ADRIFT-QPI method needs no special laser, no special microscope or image sensors; we can use live cells, we don’t need any stains or fluorescence, and there is very little chance of phototoxicity,” said Ideguchi. Phototoxicity refers to killing cells with light, which can become a problem with some other imaging techniques, such as fluorescence imaging.

Quantitative phase imaging sends a pulse of a flat sheet of light towards the cell, then measures the phase shift of the light waves after they pass through the cell. Computer analysis then reconstructs an image of the major structures inside the cell. Ideguchi and his collaborators have previously pioneered other methods to enhance quantitative phase microscopy.

Quantitative phase imaging is a powerful tool for examining individual cells because it allows researchers to make detailed measurements, like tracking the growth rate of a cell based on the shift in light waves. However, the quantitative aspect of the technique has low sensitivity because of the low saturation capacity of the image sensor, so tracking nanosized particles in and around cells is not possible with a conventional approach.

The first exposure is produced with conventional quantitative phase imaging - a flat sheet of light is pulsed towards the sample and the phase shifts of the light are measured after it passes through the sample. A computer image analysis program develops an image of the sample based on the first exposure then rapidly designs a sculpted wavefront of light that mirrors that image of the sample. A separate component called a wavefront shaping device then generates this “sculpture of light” with higher intensity light for stronger illumination and pulses it towards the sample for a second exposure. 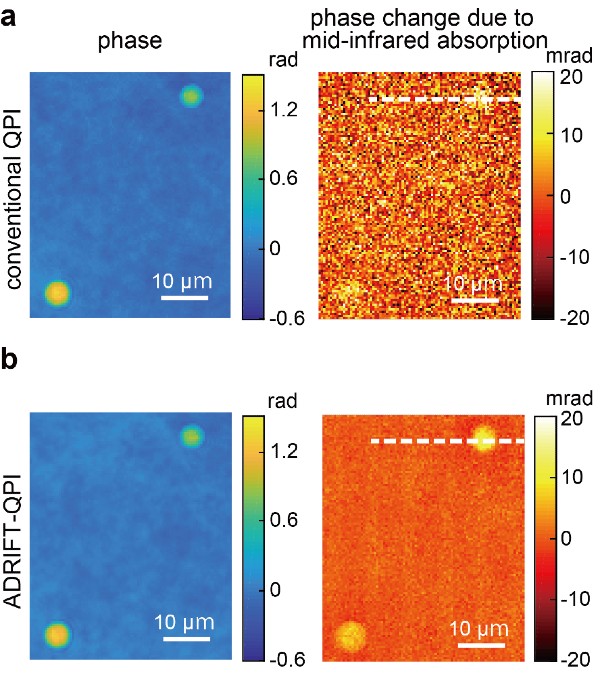 Images of silica beads taken using conventional quantitative phase imaging (top) and a clearer image produced using a new ADRIFT-QPI microscopy method (bottom). The photos on the left are images of the optical phase and images on the right show the optical phase change due to the mid-infrared (molecular specific) light absorption by the silica beads. In this proof-of-concept demonstration, researchers calculated that they achieved approximately 7 times greater sensitivity by ADRIFT-QPI than that by conventional QPI. © Toda et al., CC BY

If the first exposure produced an image that was a perfect representation of the sample, the custom-sculpted light waves of the second exposure would enter the sample at different phases, pass through the sample, then emerge as a flat sheet of light, causing the camera to see nothing but a dark image.

“This is the interesting thing: We kind of erase the sample’s image. We want to see almost nothing. We cancel out the large structures so that we can see the smaller ones in great detail,” Ideguchi explained.

In reality, the first exposure is imperfect, so the sculptured light waves emerge with subtle phase deviations.

Ideguchi says that the true benefit of ADRIFT-QPI is its ability to see tiny particles in context of the whole living cell without needing any labels or stains.

“For example, small signals from nanoscale particles like viruses or particles moving around inside and outside a cell could be detected, which allows for simultaneous observation of their behavior and the cell’s state,” said Ideguchi.