Statistical analysis of the light intensity in videos data revealed that the cell’s fluorescence dimmed by about 3.5% each time the magnetic field swept over the cells. © Ikeya and Woodward, CC BY, originally published in PNAS DOI: 10.1073/pnas.2018043118

Researchers in Japan have made the first observations of biological magnetoreception –  live, unaltered cells responding to a magnetic field in real time. This discovery is a crucial step in understanding how animals from birds to butterflies navigate using Earth’s magnetic field and addressing the question of whether weak electromagnetic fields in our environment might affect human health.

“The joyous thing about this research is to see that the relationship between the spins of two individual electrons can have a major effect on biology,” said Professor Jonathan Woodward from the University of Tokyo, who conducted the research with doctoral student Noboru Ikeya. The results were recently published in the Proceedings of the National Academy of Sciences of the United States of America (PNAS).

Over the past 50 years, chemists have identified multiple reactions and specific proteins called cryptochromes that are sensitive to magnetic fields in test tube environments. Biologists have even observed how genetically interfering with cryptochromes in fruit flies and cockroaches can eliminate the insects’ ability to navigate according to geomagnetic cues. Other research has indicated that birds’ and other animals’ geomagnetic navigation is light sensitive. However, no one has previously measured chemical reactions inside a living cell changing directly because of a magnetic field.

Woodward and Ikeya worked with HeLa cells, human cervical cancer cells that are commonly used in research labs, and were specifically interested in their flavin molecules. 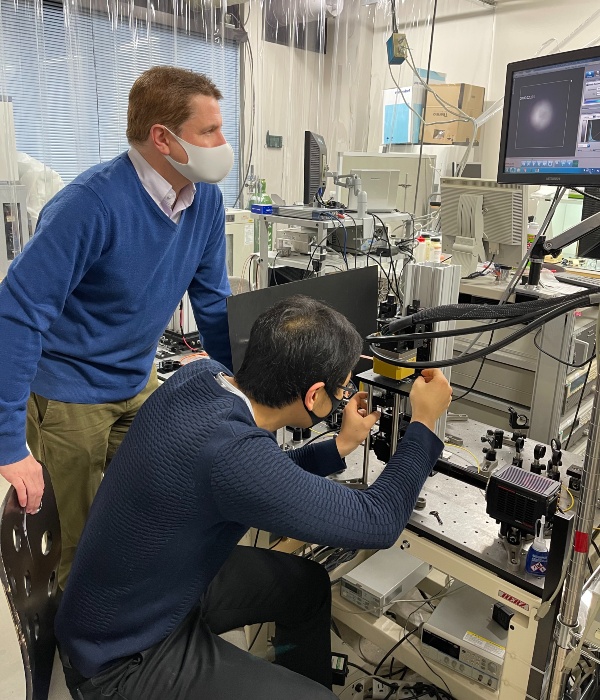 Flavins are a subunit of cryptochromes that are themselves a common and well-studied group of molecules that naturally glow, or fluoresce, when exposed to blue light. They are important light-sensing molecules in biology.

When flavins are excited by light, they can either fluoresce or produce radical pairs. This competition means that the amount of flavin fluorescence depends on how quickly the radical pairs react. The University of Tokyo team hoped to observe biological magnetoreception by monitoring cells’ autofluorescence while adding an artificial magnetic field to their environment.

Autofluorescence is common in cells, so to isolate flavin autofluorescence, the researchers used lasers to shine light of a specific wavelength onto the cells and then measured the wavelengths of the light that the cells emitted back to ensure that it matched the characteristic values of flavin autofluorescence. Standard magnetic equipment can generate heat, so the researchers took extensive precautions and performed exhaustive control measurements to verify that the only change in the cells’ environment was the presence or absence of the magnetic field.

“My goal even as a Ph.D. student has always been to directly see these radical pair effects in a real biological system. I think that is what we’ve just managed,” said Woodward.

The cells were irradiated with blue light and fluoresced for about 40 seconds. Researchers swept a magnetic field over the cells every four seconds and measured changes in the intensity of the fluorescence. Statistical analysis of the visual data from the experiments revealed that the cell’s fluorescence dimmed by about 3.5% each time the magnetic field swept over the cells.

The researchers suspect that the blue light excites the flavin molecules to generate radical pairs. The presence of a magnetic field caused more radical pairs to have the same electron spin states, meaning that there were fewer flavin molecules available to emit light. Thus, the cell’s flavin fluorescence dimmed until the magnetic field went away.

“We’ve not modified or added anything to these cells. We think we have extremely strong evidence that we’ve observed a purely quantum mechanical process affecting chemical activity at the cellular level,” Woodward remarked.

A short burst of blue light shines on a specific area (blue circle) of a single HeLa (human cervical cancer) cell and then the light that the cell emits back is measured (center). The cellular autofluorescence occurs only in the area that was irradiated with blue light (center, right). © Ikeya and Woodward, CC BY, originally published in PNAS DOI: 10.1073/pnas.2018043118

The authors are now investigating the effect in other types of cells, the potential role of the cells’ health and surroundings, and testing candidate magnetic receptors, including cryptochromes directly inside cells. Interpreting any potential environmental or physiological significance of the results will require developing more specialized and highly sensitive equipment to work with much weaker magnetic fields and more detailed cellular analysis to connect the magnetic field-sensitive response to specific signaling pathways or other consequences within the cell.