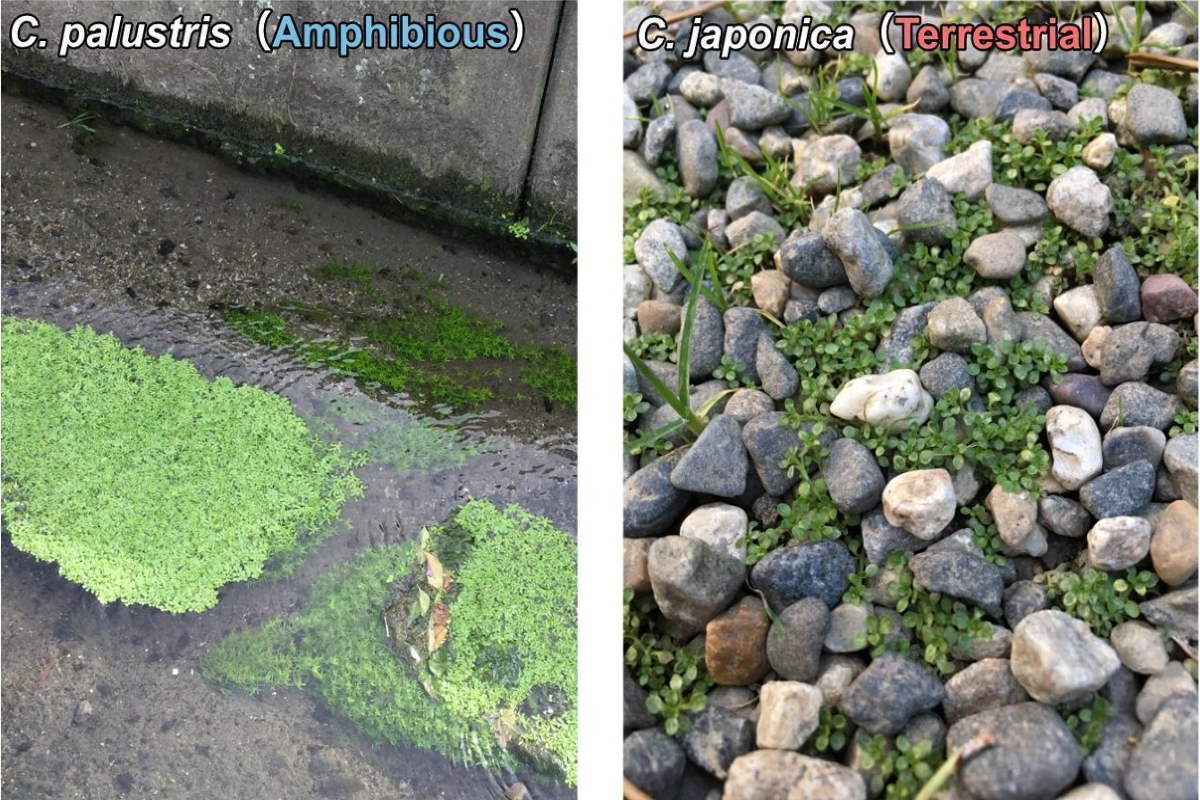 Plants in the genus Callitriche are short and have oval-shaped leaves about 1 cm in size. Amphibious Callitriche palustris (left, photographed in Matsuyama, Ehime Prefecture) often grows in small water channels in rice paddies. Terrestrial Callitriche japonica (right, photographed in Nagoya) can be found in parks or near shrines in urban areas. By studying these species, researchers uncovered a pattern in how plants evolved their equivalent of lungs – tiny pores on the surfaces of leaves called stomata. © Hiroyuki Koga, CC BY 4.0

A doctoral student has identified a long-overlooked pattern in how plants evolved their equivalent of lungs — tiny pores on the surfaces of leaves called stomata. Using specialized imaging techniques and a plant species not often found in laboratories, researchers say this discovery reveals a key difference in the evolution of plants that live on land versus those that can grow in water.

“I felt this is really interesting, this was a big surprise to me. I remember well that after observation in the microscope room on the basement floor, I rushed up the stairs to tell Dr. Koga about my discovery,” recalled first-year doctoral student Yuki Doll, studying in the University of Tokyo Graduate School of Science under the supervision of Assistant Professor Hiroyuki Koga.

“Of course, I and any scientist can see that the stomata are different, but it is easy for us to just ignore it, not sense any pattern. When I heard about Doll-kun’s discovery, I was also very excited and discussed with him that we should delve into this subject,” remarked Koga. (Kun is the Japanese honorific suffix attached to junior men’s names.)

When stomata are open, carbon dioxide, oxygen and water vapor can move in and out of the leaf for photosynthesis and respiration. Artificially manipulating the number of stomata is one potential way to keep crops healthy in a changing climate.

The UTokyo team was studying multiple types of plants in the genus Callitriche, which includes both terrestrial and aquatic species. 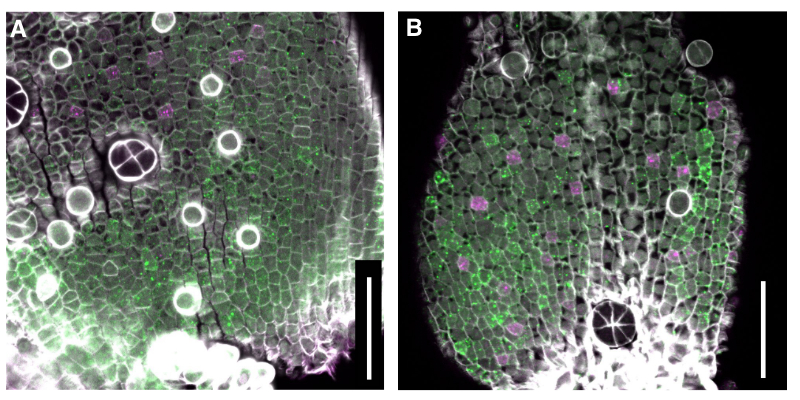 “Callitriche is an interesting but minor group of plants and we are the only ones in the world using them for developmental biological research,” said Koga.

Recalling his first experiences examining the plants, Doll said, “When I started to analyze stomata distribution patterns in aquatic Callitriche, I felt that the arrangement of the stomata are different than what I had been taught as an undergrad in the common lab species Arabidopsis. I had the impression that this strange pattern must be the case for all Callitriche, but I thought, that’s OK, Arabidopsis and Callitriche are from very different evolutionary lineages, so it’s natural for them to be different. Then I analyzed a terrestrial species of Callitriche and I saw it looked much more like Arabidopsis.”

Specifically, Doll noticed that stomata and the cells surrounding them on the surface of aquatic plants’ leaves were much more uniform than the variable cell sizes on the terrestrial plants’ leaves.

This pattern that two evolutionarily closely related plant species had such different patterns of stomata development hinted at the possibility that their living conditions — on land or in water — might regulate stomatal development.

Koga and other lab members had previously perfected a method to visualize gene activity in every individual cell of intact, whole plant leaves. The technique of whole-mount fluorescence in situ hybridization is not new, but it is difficult and unusual to use those molecular biology tools without cutting a plant into ultrathin slices.

The images from terrestrial and aquatic Callitriche leaves confirmed that the plants used the same two genes to develop their stomata, but the genes were active at different times.

In almost all plants, the gene SPEECHLESS promotes growth and division of a group of cells on the surfaces of newly forming leaves. Eventually, the gene MUTE becomes active in these cells and blocks SPEECHLESS, causing these cells to stop dividing and then differentiate to stomata. By binding artificial fluorescent tags to the two genes, researchers could see in single-cell resolution when SPEECHLESS is suppressed and MUTE becomes active. 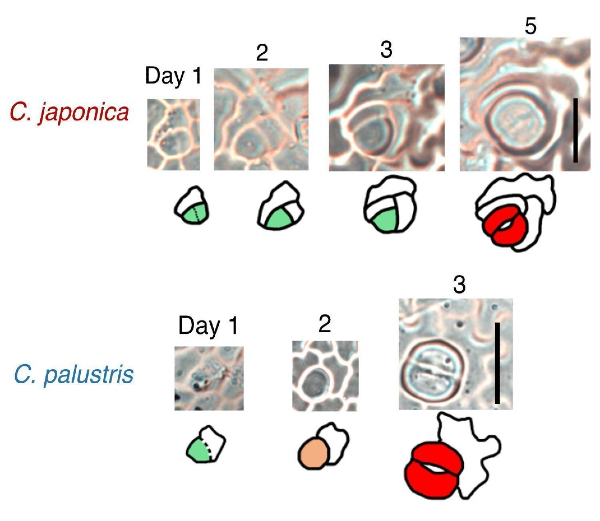 In terrestrial Callitriche, researchers saw MUTE expressed in cells of all different ages. MUTE was much more uniformly expressed only in older cells of aquatic species, which seemed to skip the division stage and have a coordinated delay to wait until late in leaf development to activate MUTE.

Researchers suspect that aquatic species evolved to delay stomatal formation to wait and sense if this new leaf will be fully submerged or if it will be above the water line. Gas exchange is less efficient under water, so submerged leaves generally have fewer stomata than leaves in air.

The discovery is exciting for evolutionary biologists interested in the relationship between environmental pressures and evolutionary genetics, but is also relevant for the future of growing crops in changing or unpredictable environments.

“The usual assumption is that closely related species have similar stomata development patterns, but our key finding is that this is not the case,” said Koga.

Instead, the researchers say their new results show that a species’ living environment is the important evolutionary force selecting its stomata development pattern, not just the species’ genetic ancestry.

By understanding the full genetic pathway that leads to flexible control of SPEECHLESS and MUTE expression between species, scientists may be able to predict which evolutionary lineages of crops are more likely to optimize their stomata to grow in a changing climate.

Yuki Doll, Hiroyuki Koga, and Hirokazu Tsukaya, "The diversity of stomatal development regulation in Callitriche is related to the intrageneric diversity in lifestyles," Proceedings of the National Academy of Science of the United States of America (PNAS): March 29, 2021, doi:10.1073/pnas.2026351118.
Link (Publication