Despite the enormous amount of research over the decades into lasers and their applications, there have been few ways to accurately, efficiently, and directly observe fine details of their interactions with materials. For the first time, researchers have found a way to acquire such data from a production laser using low-cost equipment that could vastly improve the accuracy of items cut or etched with lasers. Given the ubiquity of lasers, this could have wide-ranging implications in laboratory, commercial and industrial applications.

Lasers are used in an extraordinarily wide range of applications in the modern world. One area in particular that is increasingly important is in manufacture, the reason being the level of precision at which a laser can operate is far greater than that of the equivalent physical tool. However, this level of precision could be even higher in theory, leading to a new generation of yet unimagined technologies. There are some hurdles to overcome, though. One significant way in which laser precision could be improved is if there was a better means to obtain feedback on the way the laser interacts with a material. That way, there would be greater control and less uncertainty in the cutting and etching actions of a production laser. This problem has proven surprisingly difficult to tackle until now. 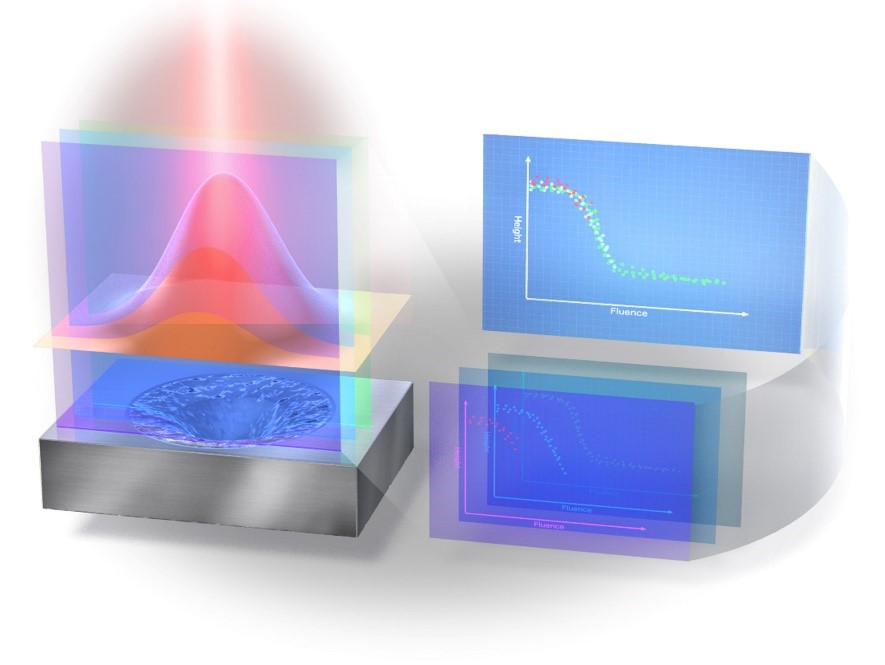 Measuring holes. (Lower left) The laser makes a hole in a material. (Upper left) The fluence of the laser is measured. (Lower right) Measurements of the fluence and the hole depth are superimposed. (Upper right) The relationship between these measurements is then determined so that hole depth can be calculated based solely on the fluence. © 2021 Sakurai et al.

“To measure how far into a surface a laser has cut often requires tens or hundreds of depth readings to take place. This is a substantial barrier for fast, automated laser-based production systems,” said Professor Junji Yumoto from the Department of Physics at the University of Tokyo. “So we have devised a new way to determine and predict the depth of a hole produced by laser pulses based on a single observation rather than tens or hundreds. This finding is an important step forward in improving the controllability of laser processing.”

Yumoto and his team wondered how to determine the depth of a laser hole using the minimal amount of information possible. This led them to look at what is known as the fluence of a laser pulse, which is the optical energy the pulse delivers over a given area. Until recently, expensive imaging apparatus would have been required to observe this fluence, and this usually lacked sufficient resolution. But thanks to developments in other areas of electronics and optics, a relatively simple Raspberry Pi Camera Version 2 proved ample for the job.

As their test laser apparatus made a hole on sapphire, the camera recorded directly the fluence distribution of a laser pulse. Then a laser microscope measured the hole shape. By superimposing these two results and using some modern numerical methods, the team produced a large and reliable data set that could accurately tell you the relation between fluence and hole depth.

“This would be correspondent with the extraction of about 250,000 data points from a single measurement,” said Yumoto. “Our new method could efficiently provide big data for machine learning and new numerical simulation methods to improve the accuracy and controllability of laser processing for manufacture.”