To many people, the term cyclone probably conjures up images of ferocious storm winds or the tornadoes central to the plot of the Wizard of Oz. However, cyclones, and anticyclones, are a broader set of large-scale weather phenomena that are, as it turns out, crucial to the way our global climate functions. Cyclones are simply systems of winds rotating around an area of low air pressure. These tend to indicate rainy or stormy weather and rotate clockwise south of the equator and counterclockwise to the north. Anticyclones conversely are weather systems rotating around areas of high pressure and tend to indicate calmer and sunnier weather. These rotate the opposite way to cyclones in either hemisphere. 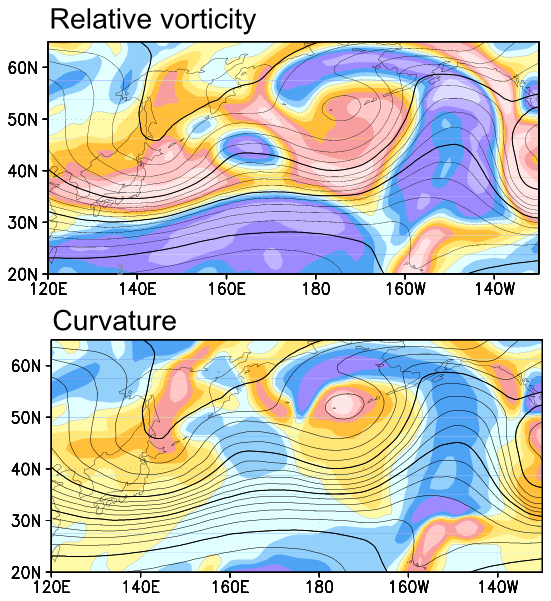 Old method, new method. The upper contour map shows a model of the cyclones and anticyclones superimposed on the westerly jet stream according to the previous standard for modeling cyclones, relative vorticity. The lower contour map shows the same, but uses the team’s new method, based on local curvature or shape. ©2021 Okajima et al.

“For decades now, atmospheric scientists have used a technique known as the Eulerian approach (named after 18th-century mathematician Leonhard Euler) to analyze long-term three-dimensional atmospheric data,” said Project Research Associate Satoru Okajima from the Research Center for Advanced Science and Technology (RCAST) at the University of Tokyo. “However, the approach considers cyclones and anticyclones to be merely deviations from a background average, and not separate entities in their own right. Furthermore, anticyclones are often unconsciously disregarded, unlike cyclones, possibly because of their association with calmer weather.”

Okajima, Professor Hisashi Nakamura from RCAST and Professor Yohai Kaspi from the Weizmann Institute of Science in Israel, adopted a novel technique to isolate data from winds rotating around an area of low or high air pressure from ever-present background winds such as the westerly jet stream, the fast-flowing air currents between 30 degrees and 60 degrees latitude in both hemispheres. This approach allowed the team to evaluate the effect local curvature, essentially the shape, of cyclones and anticyclones had on the westerly jet stream. This is in contrast to one of the previous standard ways to view these patterns called relative vorticity, which could not reveal such fine details.

“It was extremely challenging to quantitatively separate the cyclones from the anticyclones, and many attempts along the way fell flat. But our successful method can now be applied to various climate-model simulations and will hopefully help researchers better project the future of our warming climate,” said Okajima. “Climate science is important to all of us as it affects so many things. But it is also particularly interesting as it combines so many subfields like oceanography, hydrology, computer science, physics, chemistry and mathematics. I hope our contribution can be a useful tool to climate scientists for making predictions about our ever-changing world.”