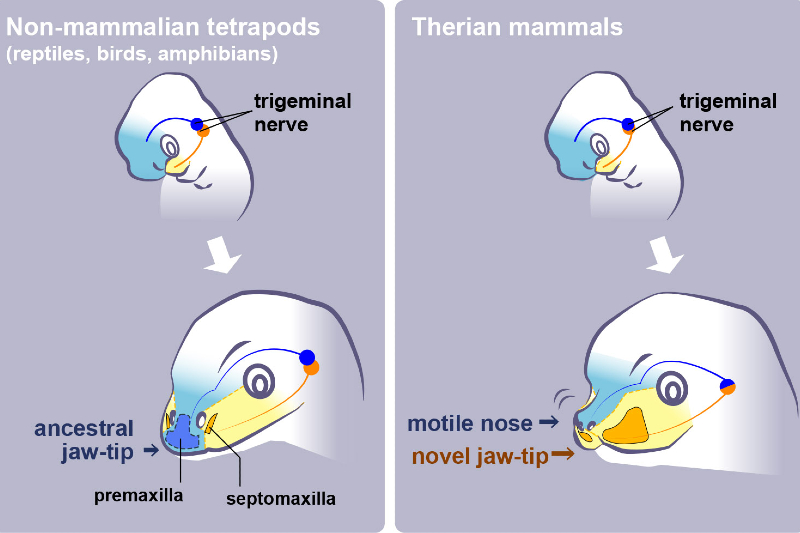 New examinations of skeletons and animal embryos have allowed researchers to discover how mammals developed protruding, flexible noses. This study contributes to uncovering the origin of mammals’ strong sense of smell and creates the potential for new animal models, like chickens or frogs, that are often used in lab experiments to investigate facial development disorders such as cleft palate.

The traditional scientific understanding of facial evolution is that both mammalian and reptilian jaws develop in almost the same way. Even though mammals have a unique nose, the evolution of this structure has remained unknown.

“Existing fossils of four-legged animals, both reptilian and mammalian ancestors, have the same number of upper jaw bones. It’s very easy to think that the bones are the same, but now we can study embryos and track cellular development to study these bones in much greater detail,” explained postdoctoral researcher Hiroki Higashiyama, who studies evolutionary development at the University of Tokyo Graduate School of Medicine. The research, recently published in Proceedings of the National Academy of Sciences, is the first to examine the evolution of facial structure using cellular studies comparing multiple embryos of multiple species.

Higashiyama and his colleagues in the laboratory of Professor Hiroki Kurihara designed experiments to track facial development in embryos of different species, including birds (chickens), reptiles (geckos) and mammals (mice). They focused on a group of cells known as the facial prominences in embryos that produce the physical structures of the face. Researchers stained the cells to track them as they moved and grew.  A group of cells called the frontonasal prominence forms the jaw tip in reptiles, but becomes the protruding nose in mammals. Mammals’ jaw tips form instead from a separate group of cells called the maxillary prominence.

Using this new perspective from their cellular experiments, researchers then examined fossil specimens.

Mammals with flexible, motile noses that can “sniff” are in the group Theria (right side of pink dot). As species’ ancestors accumulated more physical and genetic differences (increasingly younger species are shown from left to right), the jaw tip bone, the premaxilla (green), became smaller and migrated upwards and the bone that was behind it, the septomaxilla (orange), became larger and moved forwards to become therian mammals’ jaw tip. © Hiroki Higashiyama, CC BY-SA 4.0, first published in PNAS 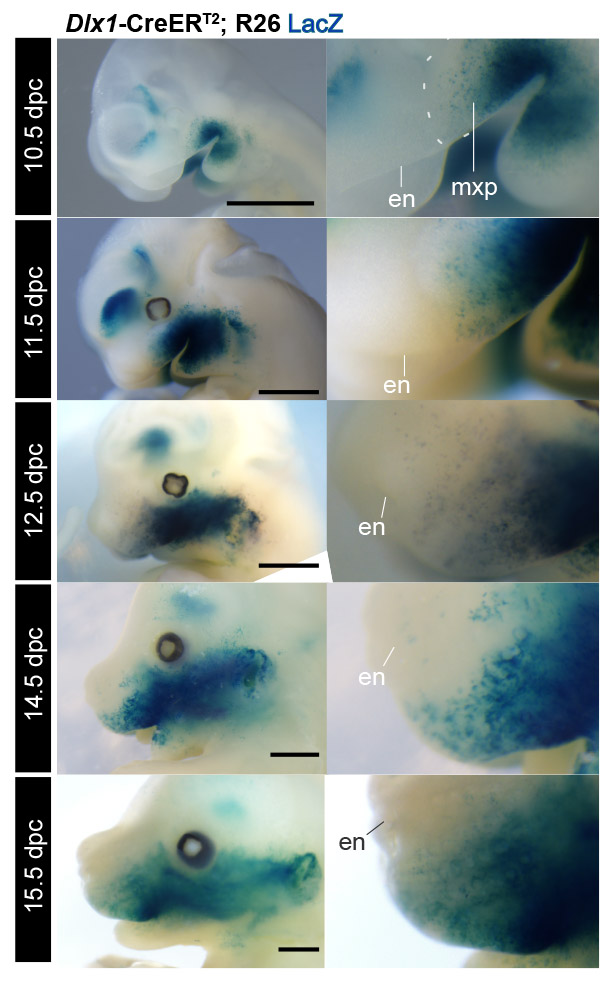 Images of increasingly older mouse embryos (top to bottom, DPC = days post conception) with images on the left side showing the whole head in profile view and images on the right side showing just the jaw tip area. Cells in the maxillary prominence (mxp, blue) eventually form almost the entire upper jaw (premaxilla). This bone is separate from the septomaxilla, which remains part of the jaw or cheek in reptiles, but becomes larger and higher up on the face in mammals. (en = external nostril) © Hiroki Higashiyama, CC BY-SA 4.0, first published in PNAS

As species’ ancestors accumulated more physical and genetic differences, the bone at the tip of reptiles’ upper jaw, the premaxilla, became smaller and migrated upwards and the bone that was behind it, the septomaxilla, became larger and moved forwards to become mammals’ jaw tip. Researchers say that the facial bones of egg-laying mammals, like the Australian platypus and echidna, provide additional living examples of transitional bone structures from the evolutionarily older reptile model to the more recently evolved mammalian structure.

This separation of the nose and jaw gives mammals their unique ability to “sniff,” using muscles to flare the nostrils and deeply inhale odors from the environment.

“This finding is a key innovation in the evolution of our and other mammals’ motile nose, which contributes to mammals’ highly sensitive sense of smell,” said Higashiyama.

Distinguishing and recognizing so many odors may have also helped mammals develop larger, more complex brains than earlier ancestor species.

The recent research has provided physical evidence of the evolutionary shift in premaxilla and septomaxilla arrangement, but separate studies will be needed to identify the genetic causes.

“Now we know the composition of facial prominences and embryonic development in multiple species, so we can compare facial development disorders in chickens or frogs to humans. We have mainly just improved textbook knowledge for now, but in the future, these animal models will be a practical application of our studies,” said Higashiyama.

Mice are currently the only animal model to study cleft lip and palate. Mice are expensive to maintain and slower to develop, so additional animal models of facial development disorders could become a valuable research tool.