With a healthy immune system, infection causes CD4+ follicular T cells (blue) and immature B cells (red), two types of white blood cell, to form a temporary structure called the germinal center (green) in organs of the immune system. Spleen cells taken from a healthy mouse (left) and a mouse genetically modified to lack the enzyme TBK1 only in B cells (right) show that TBK1 is essential for normal germinal center formation during a malaria infection. © Michelle S.J. Lee, CC BY-ND-4.0

Experts in Japan have identified a fundamental part of the immune system’s long-term memory, providing a useful new detail in the pursuit to design better vaccines for diseases, ranging from COVID-19 to malaria. The research, published in the Journal of Experimental Medicine, reveals a new role for the enzyme TBK1 in deciding the fate of immune system memory B cells.

The immune system is made of many cell types, but the two types relevant for this University of Tokyo research project are white blood cells called CD4+ follicular helper T cells and B cells. After the body recognizes an infection, the follicular helper T cells release chemical signals that cause immature B cells to learn and remember what pathogens to attack. This process of T-to-B cell signaling and B cell training occurs within a temporary cell structure called the germinal center in organs of the immune system, including the spleen, lymph nodes and tonsils. Memory B cells developed within the germinal center memorize a pathogen the first time it infects you and then if it ever gets into your body again, the mature, trained memory B cells attack it by inducing antibody production before the pathogen can multiply, saving you from feeling sick a second time.

“A goal of vaccination is to produce high-quality memory B cells for long-lasting antibody production,” said Project Assistant Professor Michelle S. J. Lee from the UTokyo Institute of Medical Science, first author of the recent publication.

“There are many factors to consider when designing vaccines for long-lasting immunity, so we should not focus only on the germinal center alone. But if you don’t have a functional germinal center, then you will be very susceptible to reinfection,” said Lee.

However, there is no limit to the number of times you can be bitten by mosquitoes and reinfected by the malaria parasite. Somehow, malaria parasites escape memory B cells. Although children are more likely to die from malaria than adults, some people can become severely ill despite any number of previous malaria infections. 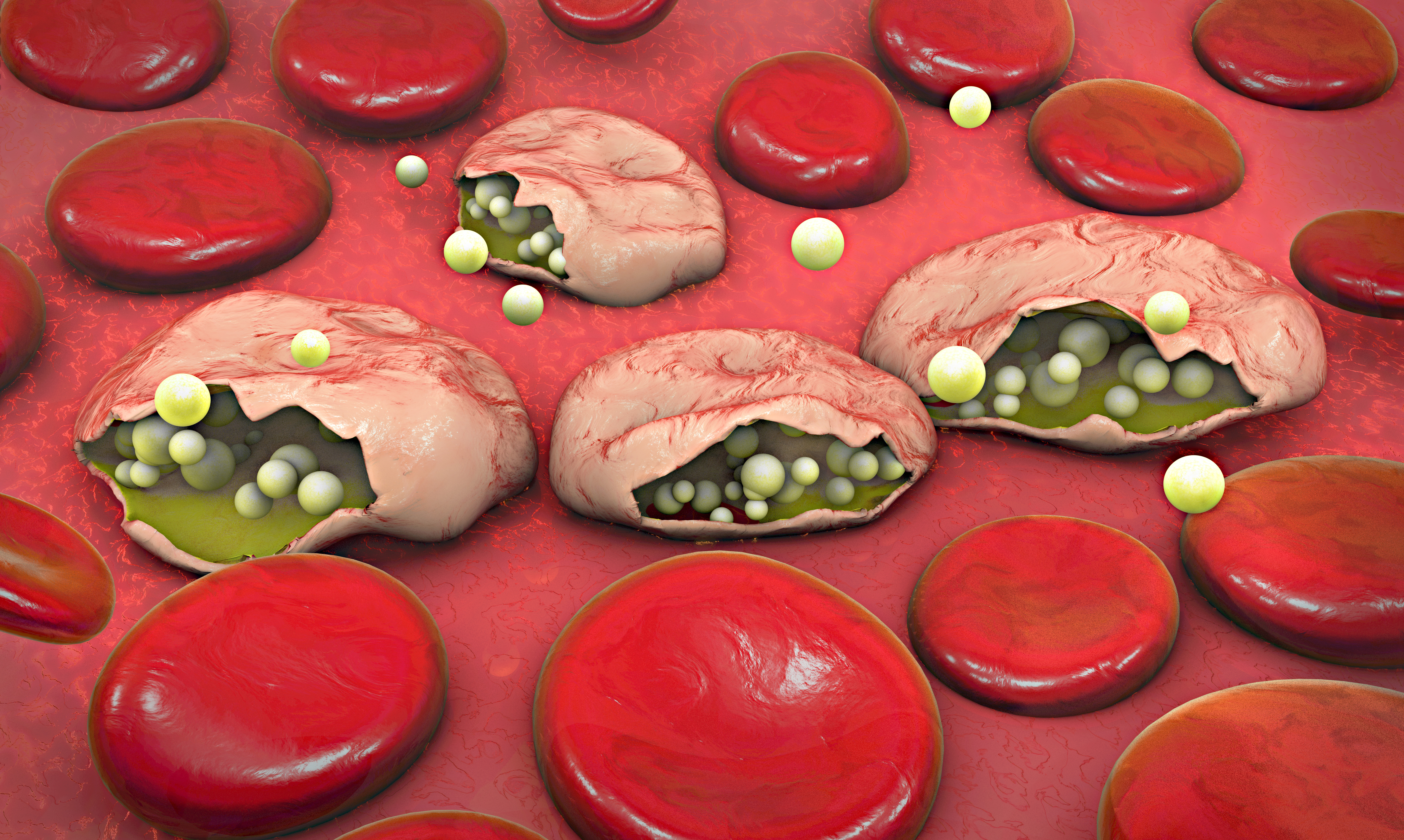 This ability of the parasite to prevent and evade effective B cells is what makes malaria an interesting pathogen for Professor Cevayir Coban, who leads the Division of Malaria Immunology at the UTokyo Institute of Medical Science and is last author of the research paper with Lee and collaborators at Osaka University.

“We want to understand the fundamentals of the natural immune response. Whatever we do should aim to eventually benefit malaria patients,” said Coban. “The COVID-19 pandemic brought global attention to infectious diseases and interest in vaccine design, so we have a chance to renew the focus on neglected diseases like malaria,” she continued.

Over many years, the scientific community has identified a wide range of roles for the molecule TBK1, an enzyme that can alter the activity of genes or other proteins by adding chemical tags, through a process called phosphorylation. TBK1 has well-known roles in antiviral immunity. However, no research group had connected TBK1 to B cell fate and the germinal center.

Researchers genetically modified mice that had nonfunctional TBK1 genes only in specific types of cells, primarily either B cells or CD4+ T cells. This cell type-specific knockout of TBK1 gives researchers a clearer idea of what a gene with many jobs is doing in different cells of the body. Coban, Lee and their colleagues infected these modified mice and healthy adult mice with the malaria parasite, observed their health, and then examined samples of their spleens and lymph nodes.

However, deleting TBK1 only from the CD4+ follicular helper T cells had no effect on the germinal centers or how the mice fared with a malaria infection. 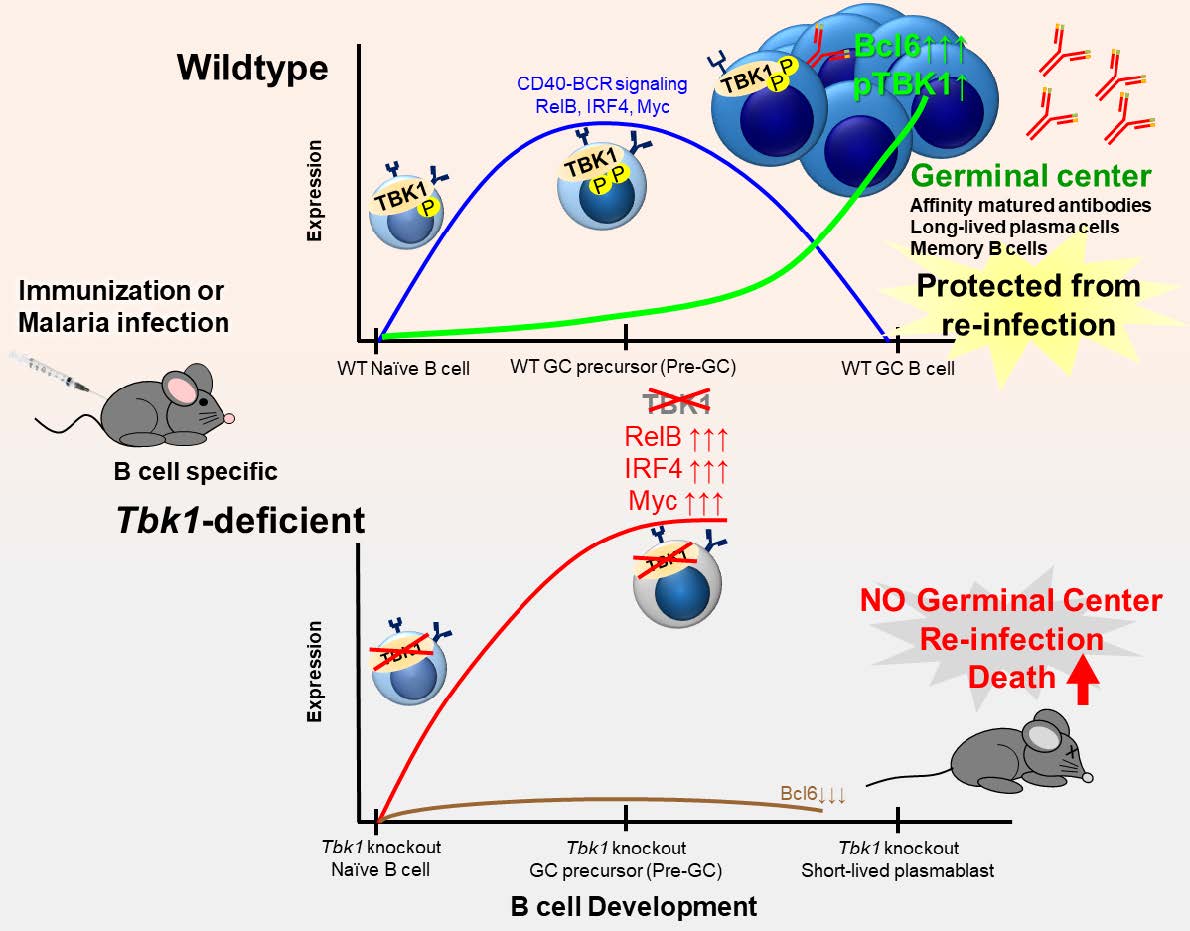 Overview of the effect of TBK1 on activity of other genes and the formation of the germinal center Caption: Normal activity of the enzyme TBK1 in a type of white blood cells called B cells is essential for formation of long-term memory in the immune system. Researchers at UTokyo worked with healthy (Wildtype, top half of image) mice and mice genetically modified to lack TBK1 only in their B cells (TBK1-deficient, bottom half of image). When healthy mice were infected with the mosquito-borne parasite malaria, TBK1 reduces the activity of genes that block B cells’ development, allowing them to grow into mature memory B cells. The B cells of TBK1-deficient mice remain immature, meaning that if the mice survive their first malaria infection, their immune systems retain no long-term memory of the parasite and are extremely vulnerable to a repeated malaria infection. © Michelle S. J. Lee, CC BY-ND-4.0, first published in Journal of Experimental Medicine

Further analysis confirmed that without TBK1, many proteins in immature B cells had abnormal phosphorylation compared to normal immature B cells. For different genes, abnormal phosphorylation can cause either abnormal increases or decreases in activity. Researchers suspect that in B cells, TBK1 activity acts as an off switch for certain genes, essentially turning off genes that trap the B cells in their immature state.

“This is the first time to show TBK1 is essential in B cells to form the germinal centers and produce high-quality, mature antibodies,” said Lee.

Researchers are hopeful that eventually, with more fundamental knowledge about the remaining mysteries of the immune system, future vaccines can be designed to produce longer-lasting immunity, potentially without needing multiple doses of vaccine. However, vaccine design will always be complicated by the unique qualities of each pathogen and its mutated versions, especially in the case of rapidly evolving pathogens like Sars-CoV-2, the virus causing COVID-19.

“For now, we can at least say that an effective vaccine tailored to produce long-lasting protective immunity should not reduce TBK1 activity in B cells,” said Coban.