Model comparison. The researchers’ Z-correlated molecular model is compared to the ball-and-stick and the CPK models. © 2021 Nakamura, Harano et al.

There are multiple ways to create two- and three-dimensional models of atoms and molecules. With the advent of cutting-edge apparatus that can image samples at the atomic scale, scientists found that traditional molecular models did not fit the images they saw. Researchers have devised a better way to visualize molecules building on these traditional methods. Their models fit the imaging data they acquire well, and they hope the models can therefore help chemists with their intuition for interpreting molecular images.

Anyone reading this is likely familiar with traditional ball-and-stick models of atoms and molecules, where balls of different size and color represent the various atomic nuclei, and the sticks represent properties of the bonds between atoms. Although these are useful educational tools, they are far simpler than the reality they reflect. Chemists tend to use models such as the Corey–Pauling–Koltun (CPK) model, which is similar to the ball-and-stick model but with the balls inflated so that they overlap. The CPK model tells chemists more about the way components of a molecule interact far better than the ball-and-stick model.

In recent years, it has finally become possible not only to capture the structures of molecules but even to record their motion and interactions in videos thanks to technologies like atomic resolution transmission electron microscopy (AR-TEM). This is sometimes called “cinematic molecular science.” However, it is with this leap in our capacity to visualize the invisible that the ball-and-stick or CPK models become a hindrance rather than a help. When researchers from the Department of Chemistry at the University of Tokyo tried to fit these models with the images they were seeing, they ran into some problems. 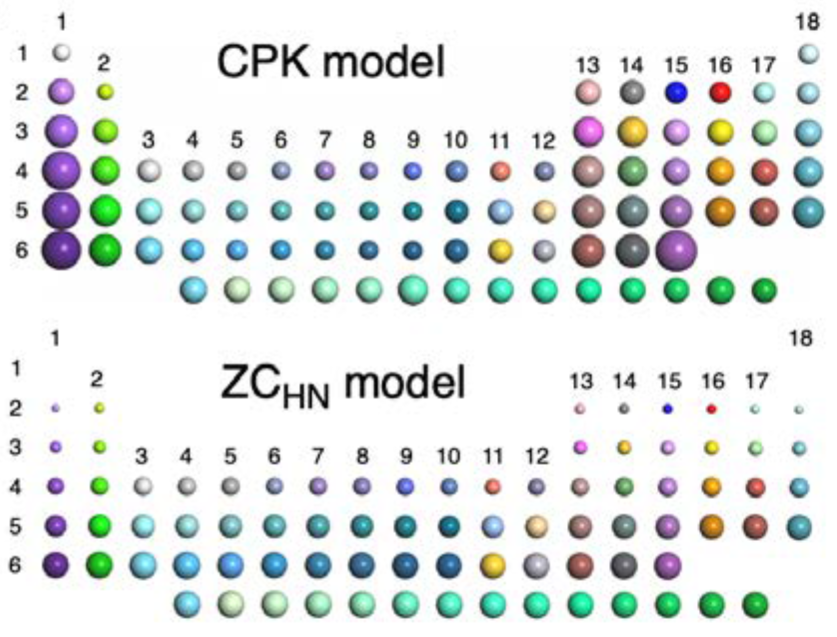 Size comparison. The familiar periodic table of elements with each kind of atom shown as colored balls. The size of each atom in the CPK model (above) is larger than those in the Z-correlated model (below), as it is based on the distribution of electrons around an atom rather than on the size of the nucleus itself. This is important in electron microscopy where the electron cloud is not visible. © 2021 Nakamura, Harano et al.

“The ball-and-stick model is far too simple to accurately describe what is really going on in our images,” said Professor Koji Harano. “And the CPK model, which technically shows the spread of the electron cloud around an atomic nucleus, is too dense to discern some details. The reason is that neither of those models demonstrate the true sizes of atoms that images from AR-TEM show.”

In AR-TEM images, the size of each atom directly correlates with that atom’s atomic weight, known simply as Z. So Professor Eiichi Nakamura and his team opted to modify a ball-and-stick model to fit their images, where each nucleus in the model was sized according to the Z number of the nucleus it represents, and named it Z-correlated (ZC) molecular model. They kept the same color system used in the CPK model, originally introduced by American chemists Robert Corey and Linus Pauling in 1952.

“A picture is worth a thousand words, and you can compare AR-TEM images to the first-ever photograph of a black hole,” said Nakamura. “They both show reality as never seen before, and both are far less clear than how people probably imagine those things should look. This is why models are so important, to bridge the gap between imagination and reality. We hope the Z-correlated molecular model will help chemists analyze electron microscope images based on intuition without even the need for any theoretical calculations, and open up a new world of ‘cinematic molecular science.’”