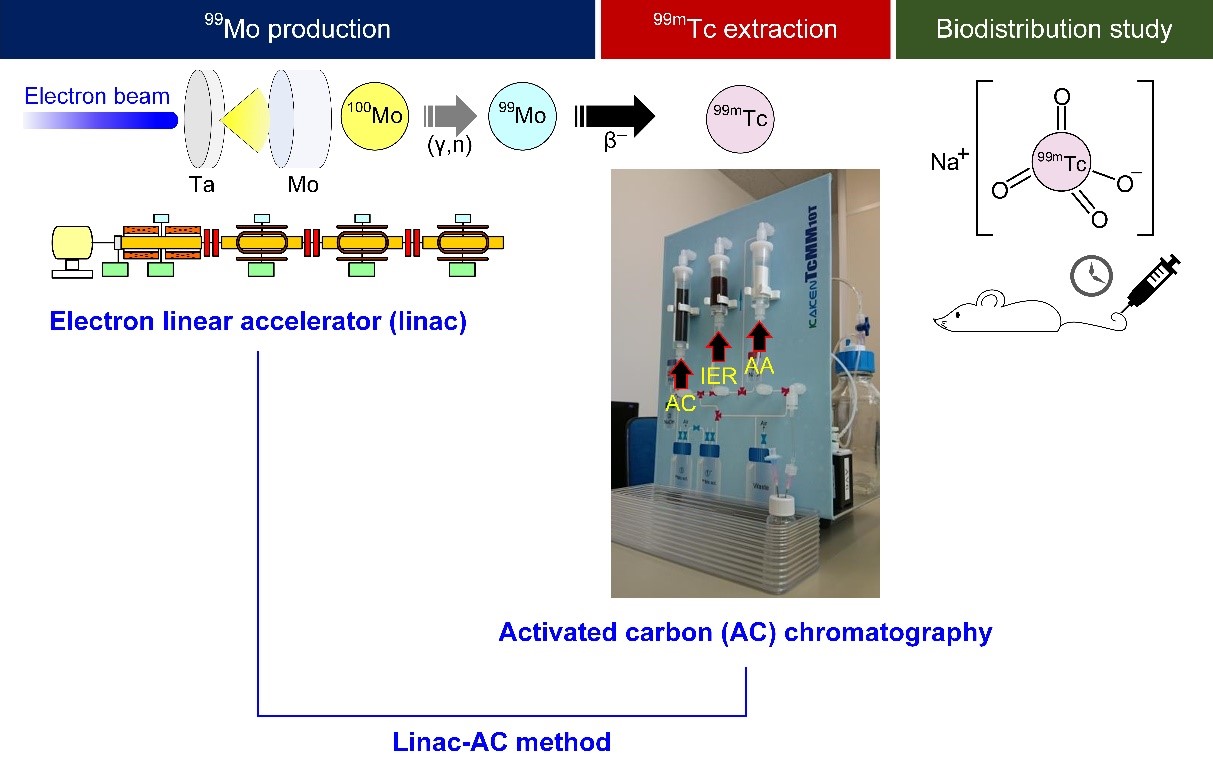 New production method promises to end global shortages of medical radioisotopes
A schematic of the 99Mo/99mTc production system based on an electron linear accelerator and activated carbon-based 99mTc generator.
©2022 The University of Tokyo

A commonly used radioisotope, technetium-99m, used in medical diagnoses regularly suffers from shortages due to being produced at aging nuclear reactors that often shut down for repairs. But an alternative technique for producing the isotope, developed by a group of researchers at the University of Tokyo and that takes advantage of equipment commonly found in hospitals, promises to bring an end to such supply chain frustrations.

A paper describing the method and its effectiveness in mice test subjects was recently published in the journal Nuclear Medicine Biology.

Technetium-99m (99mTc) is one of the most commonly used medical radioisotopes in the world, thanks to the unique properties of its radioactivity. It emits gamma rays of moderate energy that are easily detectable by medical equipment. 99mTc also has a moderately short half-life that allows its gamma emissions to be used as a tracer in medical diagnostic procedures while keeping patient radiation exposure very low.

This radioisotope is produced from molybdenum-99 (99Mo), which is produced by the fission of uranium-235 in nuclear reactors. Most of the reactors producing the vast majority of the world’s supply of 99mTc are quite old now, and frequently shut down for extended periods for repairs, threatening the availability of this vital medical commodity. A worldwide shortage of 99mTc occurred in 2010 when two of the 99Mo production reactors were offline at the same time, prompting research into alternative methods of 99Mo/99mTc production.

One of the most promising alternatives is the use of a linear particle accelerator (or “linac”), instead of nuclear reactors. A linac speeds up charged subatomic particles to a very high velocity along a straight line, as opposed to acceleration around a loop (hence “linear”). The 99Mo is produced by irradiating molybdenum trioxide with photons from the linac electron beams, and the 99mTc extracted from the decaying 99Mo by a technetium-99m generator, sometimes called a “moly cow” by its operators.

What makes this alternative so attractive compared to reactors is that the relatively compact linacs are already widely used in hospitals for radiation treatment for cancer patients.

A challenge this option has faced, however, is that for the 99mTc to be usable as a medical tracer, the element must have a high radioactive concentration (RAC — the amount of radioactivity per volume), and the 99Mo precursor produced with linacs has a much lower level of “specific activity” (emissions per molybdenum mass) than that produced as a result of nuclear fission. The 99Mo can result in the 99mTc having impractically low RAC if the 99mTc is extracted using aluminum oxide (alumina) as a filter in the moly cow machine.

To solve this problem, the University of Tokyo researchers replaced the alumina with activated carbon (sometimes called activated charcoal, or just AC), a type of carbon that has been specially processed to have lots of tiny pores. These pores profoundly enhance the surface area of the substance, thus also enhancing the places to which atoms can adhere (and thus be extracted). For this reason, activated carbon is widely used in air filters, sewage treatment, decaffeination and gold purification. This attribute also makes it great for concentrating the 99mTc and can be used even with 99Mo with low specific activity.

“We had previously demonstrated the practicality of this combined linac-AC method to produce medically usable 99mTc, but had yet to perform any preclinical or clinical trials to see if in the body, this alternatively produced radioisotope is as effective as its conventionally produced one,” said Jaewoong Jang, an assistant professor at the university and lead author of the study. “We had a great concept, but no idea whether it would be what we call ‘bioequivalent’ — in essence, work the same way in patients.”

So they injected one group of mice with the linac-AC-derived 99mTc in the form of pertechnetate (the most basic compound of technetium used in radiopharmaceuticals) and another group of mice with the conventionally produced 99mTc. The mice were then dissected to assess the spread (“biodistribution”) of the radioisotope in different organs.

The study was preliminary, with the assessment taking place at only one time point after injection of the radioisotope. The researchers now want to perform additional biodistribution studies at different time points to completely confirm the bioequivalence of the two 99mTc methods.