Public health authorities seek to increase vaccine uptake, especially among those who are hesitant. But there is little evidence as to the best way to achieve this. New research suggests that rather than direct incentives, such as money, government-imposed mandates requiring vaccination to access certain public spaces could be the key. To explore this, researchers used the variation in the dates of mandates and subsequent COVID-19 vaccine uptake across Canadian provinces and European countries.

The COVID-19 pandemic has been a trying time for everyone. Amongst the challenges facing public health authorities around the world is the struggle to vaccinate as many people as possible in order to slow the spread of the virus. Although the majority of people do seem to realize the benefits of vaccination, people vary in how urgently they seek vaccination or in how hesitant they might be to vaccinate at all.

Different ways to encourage people to vaccinate have been suggested and tried, including public awareness campaigns and even financial incentives. But Professor Hitoshi Shigeoka from the Graduate School of Public Policy at the University of Tokyo and his international team have studied the impact of vaccine mandates, requirements for proof of vaccination to use certain public spaces and amenities, and found those might be more effective at persuading people to vaccinate.

“Despite the proven benefits of vaccination, uptake in many countries slowed in the summer of 2021, so naturally health officials wished to reverse that,” said Shigeoka. “Previously, we investigated the effectiveness of mask mandates and found that those did lead to a reduction of cases. To follow up, we thought there might be a relationship between vaccine mandates and the uptake of vaccinations. Provinces in Canada, as well as the European countries of France, Italy and Germany, all issued mandates at different times and also had national vaccination programs. So we looked into what happened around and after the time the mandates came into effect or were announced.” 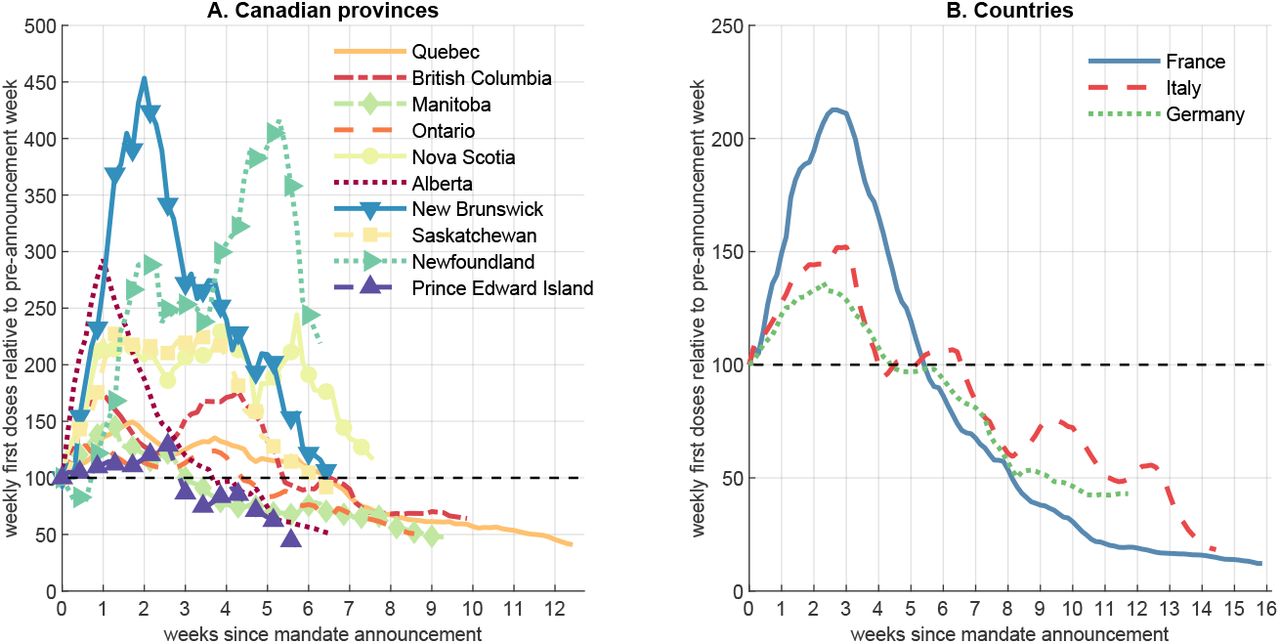 Shigeoka and his team used a statistical method called difference in differences to explore potential connections between mandates and vaccine uptake. Since the timing of the announcement of vaccination mandates differs across 10 provinces in Canada, ranging from early August 2021 (Quebec) to late September 2021 (Prince Edward Island), they used the provinces that had not yet announced vaccine mandates as the control groups for those which had already announced mandates.

“We knew there was increased uptake following the mandates, but something that surprised us was how much the mere announcement of mandates rather than their actual implementation boosted vaccination rates,” said Shigeoka.

It’s important to note that although this kind of data analysis about the effect of mandates is important for public health authorities, there are other related issues such as ethics, economics, politics, and other factors, which were not a part of this study.