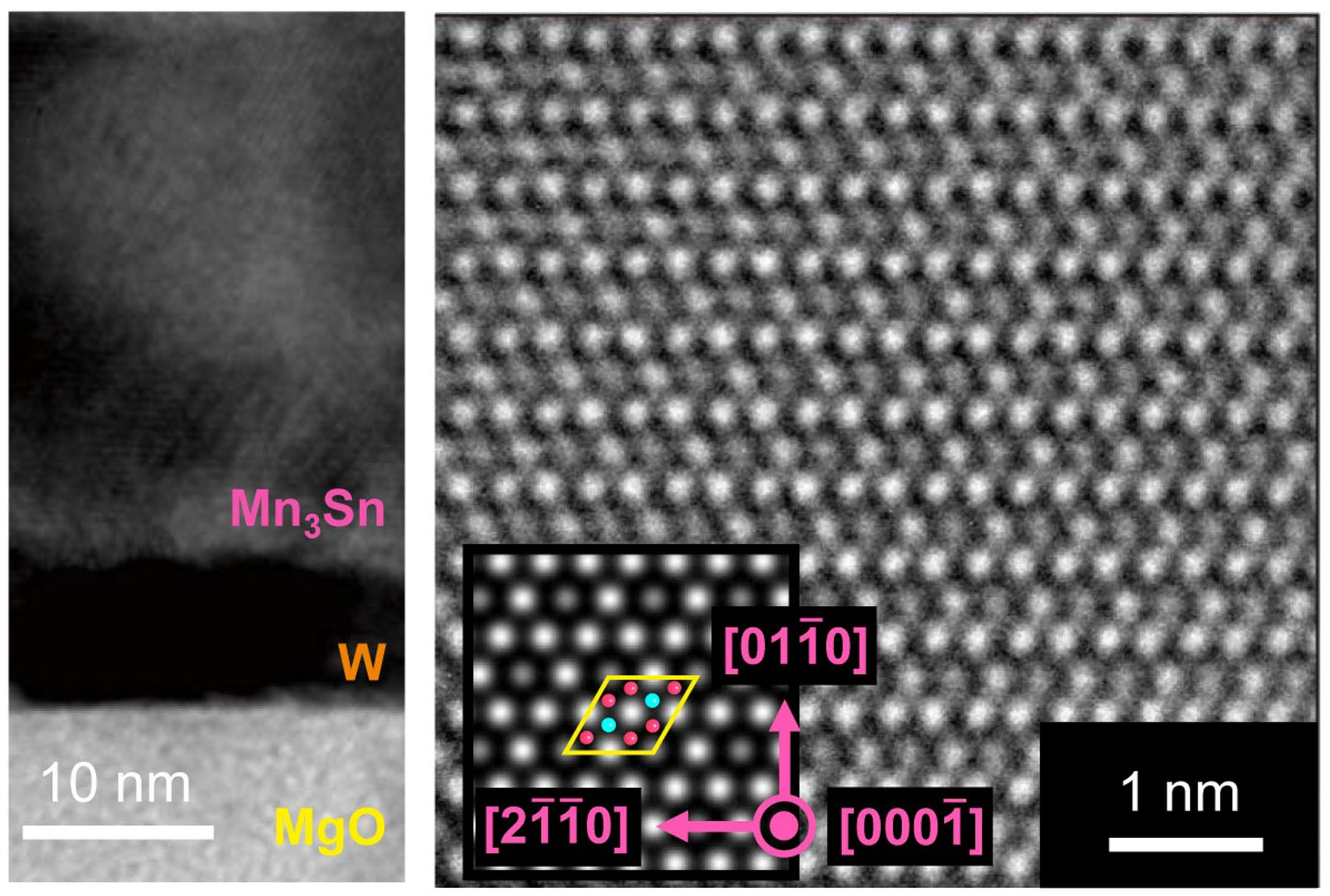 Mn3Sn. (Left) A cross-sectional transmission electronic microscope image of the research material on a layer of tungsten (W) and magnesium oxide (MgO). (Right) A top down view of the material with an inset image showing manganese atoms in red and tin atoms in light blue. ©2022 Nakatsuji et al.

Computers and smartphones have different kinds of memory, which vary in speed and power efficiency depending on where they are used in the system. Typically, larger computers, especially those in data centers, will use a lot of magnetic hard drives, which are less common in consumer systems now. The magnetic technology these are based on provides very high capacity, but lacks the speed of solid state system memory. Devices based on upcoming spintronic technology may be able to bridge that gap and radically improve upon even theoretical performance of classical electronic devices.

Professor Satoru Nakatsuji and Project Associate Professor Tomoya Higo from the Department of Physics at the University of Tokyo, together with their team, explore the world of spintronics and other related areas of solid state physics — broadly speaking, the physics of things that function without moving. Over the years, they have studied special kinds of magnetic materials, some of which have very unusual properties. You’ll be familiar with ferromagnets, as these are the kinds that exist in many everyday applications like computer hard drives and electric motors — you probably even have some stuck to your refrigerator. However, of greater interest to the team are more obscure magnetic materials called antiferromagnets.

“Like ferromagnets, antiferromagnets’ magnetic properties arise from the collective behavior of their component particles, in particular the spins of their electrons, something analogous to angular momentum,” said Nakatsuji. “Both materials can be used to encode information by changing localized groups of constituent particles. However, antiferromagnets have a distinct advantage in the high speed at which these changes to the information-storing spin states can be made, at the cost of increased complexity.”

“Some spintronic memory devices already exist. MRAM (magnetoresistive random access memory) has been commercialized and can replace electronic memory in some situations, but it is based on ferromagnetic switching,” said Higo. “After considerable trial and error, I believe we are the first to report the successful switching of spin states in antiferromagnetic material Mn3Sn by using the same method as that used for ferromagnets in the MRAM, meaning we have coaxed the antiferromagnetic substance into acting as a simple memory device.”

This method of switching is called spin-orbit torque (SOT) switching and it’s cause for excitement in the technology sector. It uses a fraction of the power to change the state of a bit (1 or 0) in memory, and although the researchers’ experiments involved switching their Mn3Sn sample in as little as a few milliseconds (thousandth of a second), they are confident that SOT switching could occur on the picosecond (trillionth of a second) scale, which would be orders of magnitude faster than the switching speed of current state-of-the-art electronic computer chips.

“We achieved this due to the unique material Mn3Sn,” said Nakatsuji. “It proved far easier to work with in this way than other antiferromagnetic materials may have been.”

“There is no rule book on how to fabricate this material. We aim to create a pure, flat crystal lattice of Mn3Sn from manganese and tin using a process called molecular beam epitaxy,” said Higo. “There are many parameters to this process that have to be fine-tuned, and we are still refining the process to see how it might be scaled up if it’s to become an industrial method one day.”