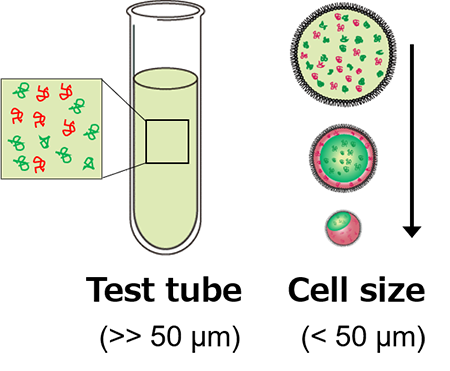 New research shows that cell size and membranes may play a key role in regulating the distribution of molecules inside cells. This discovery offers a new unconventional method for manipulating artificial cells via their size and interfacial properties, or their boundaries, instead of through molecular modification of their chemical structure. This could aid multiple industries, from cosmetics to pharmaceuticals, which want to avoid unexpected changes to the properties of artificial cells in their products, such as when creating new medicines like vaccines.

Artificial cells can be little lifesavers, such as the COVID-19 mRNA vaccine. These engineered wonders can be made to mimic the functions of biological cells and perform all sorts of tasks, from “teaching” our own cells how to respond to a virus, growing artificial skin for testing cosmetics, or making food preservatives.

However, creating and manipulating these cells comes with many challenges. “In recent years, artificial cells containing solutions (or mixtures) of multicomponent molecules have been used in cosmetic and pharmaceutical products. Although such solutions did not separate in test tubes, they sometimes separated in artificial cells, which was problematic for applications,” explained Associate Professor Miho Yanagisawa from the Graduate School of Arts and Sciences at the University of Tokyo.

This separation, called liquid-liquid phase separation (LLPS), has emerged as a fundamental mechanism for regulating biological activity in living organisms. However, the type of biomolecules that separate and the conditions under which this occurs is yet to be fully understood. This latest research published in ACS Materials Letters provides some much-needed insight.

“Conventionally, separation conditions and the degree of separation were considered to be size-independent, as long as the size of the container was about 1 micrometer, or micron (one-thousandth of a millimeter), or larger,” said Yanagisawa. However, a surprising finding of this research was that the smaller the artificial cell, the greater the degree to which separation occurred.

The idea of cell size-dependent behavior was suggested in 2012, but the details of this phenomenon remained unclear. The team at the University of Tokyo performed multiscale experiments using different-sized droplets of two polymers — short, polyethylene glycol (PEG) and long, dextran — in blends contained within a lipid membrane to create different-sized artificial cells.

“From such experiments, we realized that the membrane senses slight differences between molecules and selects the preferred molecule, which is the origin of the cell size-dependent behavior. This was the major climax of the study,” explained Yanagisawa. “We believe that this discovery offers a new method of manipulating materials via the space size and interfacial properties of the containers of artificial cells. This idea is quite different from the conventional ones through manipulation of molecular structures.”

So what next? According to Yanagisawa, “There are mainly two directions for the next step: one is toward a physical understanding and formulation of the cell-size space effects on the molecular behaviors; another is toward pharmaceuticals and cosmetics applications, using the artificial cells considering the cell-size effect.”