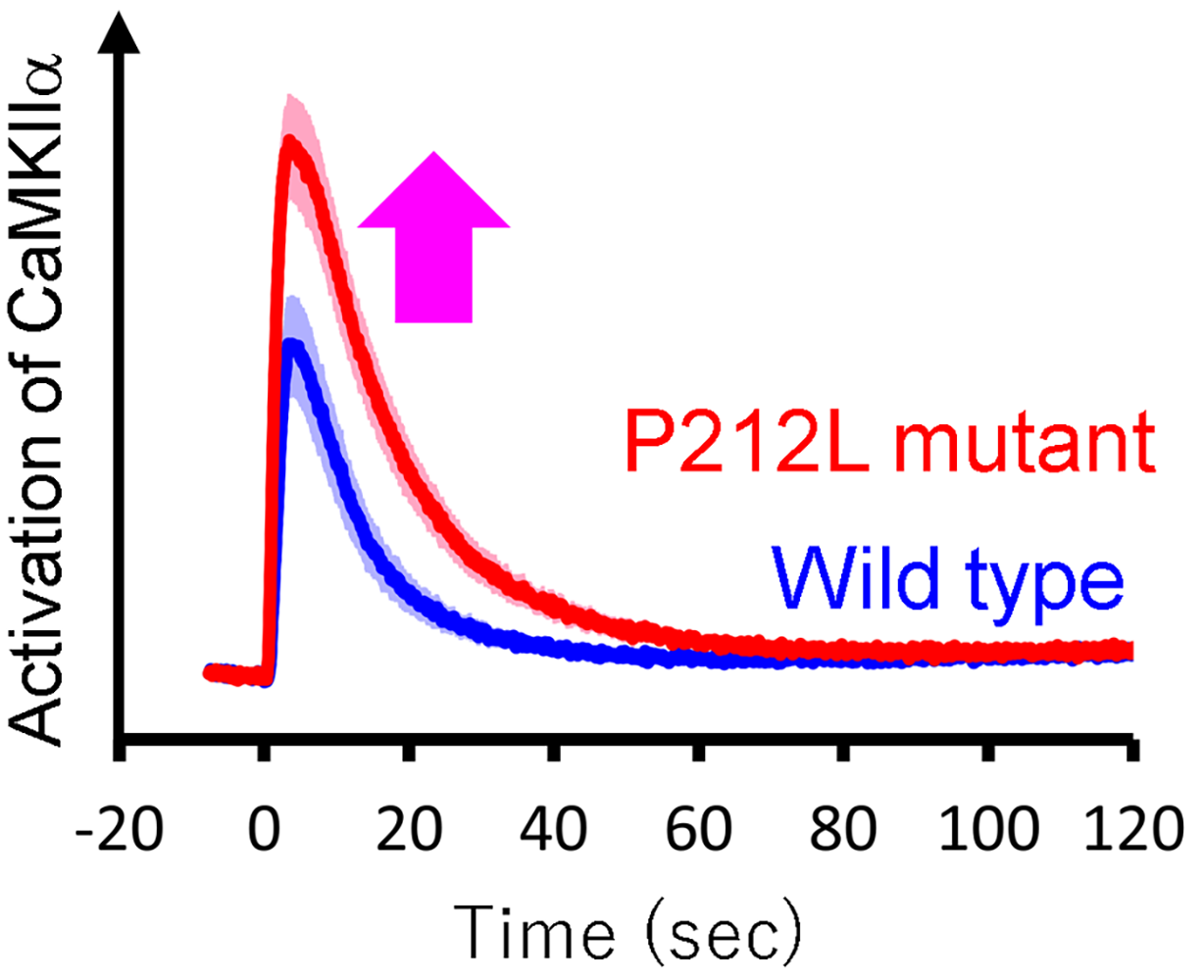 Graph showing irregular activity caused by the P212L mutation of CaMKIIalpha. In this graph, the red line represents the enzyme activity over time for the P212L mutant protein while the blue line shows the activity of a regular, unmutated protein. The response of the P2121L mutant of CaMKIIalpha to being activated is visibly more extreme.

A new study reveals how a rare genetic mutation leads to intellectual disability. The P212L mutation in an enzyme called CaMKIIalpha which is important for learning and memory, is known to be linked to intellectual disability. However, the exact process by which the mutation affected the enzyme’s activity was unclear, until now. A newly developed method of protein analysis has shown that the P212L mutation causes dramatically more activation of CaMKIIalpha. This has enabled researchers to identify a potential treatment using existing medicine, and this new method could be adapted to analyze other genetic causes of disability and disease in the future.

About 1% of the global population lives with an intellectual disability. There are several commonly known causes including infection, injury or genetic conditions. CaMKIIalpha is an enzyme that mediates biochemical reactions in the brain and is important for our ability to learn. Typical learning requires that CaMKIIalpha activity is regulated at appropriate levels and at the appropriate timing, and irregularities with it have previously been linked to a variety of neurological disorders. One known cause of intellectual disability is a P212L mutation in CaMKIIalpha. Although the association between intellectual disability and the mutation is known, exactly how the enzyme’s mutation alters its function was not previously understood.

The mutation of P212L is very rare, but a patient was identified in Japan who then took part in a study with researchers from the University of Tokyo and Nagoya University. “This is only the fourth known case of this P212L mutation in the world. However, the relationship between this single gene mutation and symptoms is relatively clear, making it important in the study of intellectual disability,” said Hajime Fujii, lecturer from the Graduate School of Medicine at the University of Tokyo.

Since reactions at this scale are not directly visible to our eyes, they must be monitored through other techniques. However, these experiments are usually laborious and time consuming. “It is difficult to process many samples in parallel and not possible to measure enzyme activity in physiological conditions, such as living cells or synapses. We wanted something more simple, scalable, sensitive and quantitative. So, we developed a method to measure enzyme activity by fluorescent probe,” explained Fujii. “This can tell us the progress of a biochemical reaction by its brightness or color. In order to create a fluorescent probe, we had to couple the biochemical reaction, such as molecular binding or changes in protein shape (that occur at the scale of a nanometer), with fluorescence brightness or color. So, we used a physical phenomenon called FRET (Förster resonance energy transfer), with which the probe can change relative brightness between two colors according to changes of the CaMKIIalpha that occur when it is activated. We call our approach a FRET-based kinase phenotyping strategy.”

This new method enabled the team to rapidly and accurately analyze nearly a hundred cell extracts and study their biological activity. What it found was that CaMKIIalpha with the P212L mutation exhibited enhanced activation compared to usual. This means that rewiring or changes in the brain that usually occur during learning may possibly be irregular in people with this mutation, compared to people without it. The researchers also found that in neurons, taken from rats in this study, the CaMKIIalpha response to stimulation was increased. The activation response of the enzyme rose faster and fell slower, again demonstrating an unusually enhanced response.

Time lapse images showing activation of CaMKIIalpha in a living neuron. In the images, the rise and fall of CaMKIIalpha activation levels in a neuron are indicated by pseudo-colors. Elapsed time from the stimulation is indicated in seconds by the white numbers.

“So far, there has been no effective medical treatment for children with genetically based intellectual disability. This study can offer the possibility of treatment to patients with intellectual disability who have this rare variant of CaMKII” said Assistant Professor Hiroyuki Kidokoro from Nagoya University, a paper co-author and pediatrician who worked with the patient.

Looking to the future, Fujii said, “Mutations in CaMKIIalpha have been related to other neurodevelopmental disorders, so we may be able to clarify the development of and treatment strategies for these mutations in the same way, by applying this FRET-based kinase phenotyping platform. To apply our strategy to mutations of other genes that cause various diseases, we will need fluorescent probes to measure the functions of the genes. Currently, fluorescent probes are available for some genes, but not others, so it will be necessary to develop new fluorescent probes, which may take some time.”