Some species of tardigrades, or water bears as the tiny aquatic creatures are also known, can survive in different environments often hostile or even fatal to most forms of life. For the first time, researchers describe a new mechanism that explains how some tardigrades can endure extreme dehydration without dying. They explored proteins that form a gel during cellular dehydration. This gel stiffens to support and protect the cells from mechanical stress that would otherwise kill them. These proteins have also been shown to work in insect cells and even show limited functionality in human cultured cells.

Tardigrades often draw attention to themselves, despite being so tiny. Their uncanny ability to survive in situations that would kill most organisms has captured the public’s imagination. One could easily imagine that by decoding their secrets, we could apply the knowledge to ourselves to make humans more resilient to extreme temperatures, pressures, and even dehydration. This is just science fiction for now, but nevertheless, researchers, also captivated by the microscopic creatures, seek to understand the mechanisms responsible for their robustness, as this could bring other benefits too.

“Although water is essential to all life we know of, some tardigrades can live without it potentially for decades. The trick is in how their cells deal with this stress during the process of dehydration,” said Associate Professor Takekazu Kunieda from the University of Tokyo’s Department of Biological Sciences. “It’s thought that as water leaves a cell, some kind of protein must help the cell maintain physical strength to avoid collapsing in on itself. After testing several different kinds, we have found that cytoplasmic-abundant heat soluble (CAHS) proteins, unique to tardigrades, are responsible for protecting their cells against dehydration.”

Rehydration. Here you can see the gel-like filaments previously made by CAHS proteins gently breaking down as the human cultured cell rehydrates and can eventually support itself again. ©2022 A Tanaka and T Kunieda.

Recent research into CAHS proteins reveals that they can sense when the cell encapsulating them becomes dehydrated, and that’s when they kick into action. CAHS proteins form gel-like filaments as they dry out. These form networks that support the shape of the cell as it loses its water. The process is reversible, so as the tardigrade cells become rehydrated, the filaments recede at a rate that doesn’t cause undue stress on the cell. Interestingly though, the proteins exhibited the same kind of action even when isolated from tardigrade cells.

“Trying to see how CAHS proteins behaved in insect and human cells presented some interesting challenges,” said lead author Akihiro Tanaka, a graduate student in the lab. “For one thing, in order to visualize the proteins, we needed to stain them so they show up under our microscopes. However, the typical staining method requires solutions containing water, which obviously confounds any experiment where water concentration is a factor one seeks to control for. So we turned to a methanol-based solution to get around this problem.”

Research on mechanisms related to dry preservation of cells or organisms could have many future applications. Kunieda and his team hope that through this new knowledge, researchers might find ways to improve the preservation of cell materials and biomolecules in a dry state. This could extend the shelf life of materials used for research, medicines with short expiry dates, or maybe even whole organs needed for transplants. 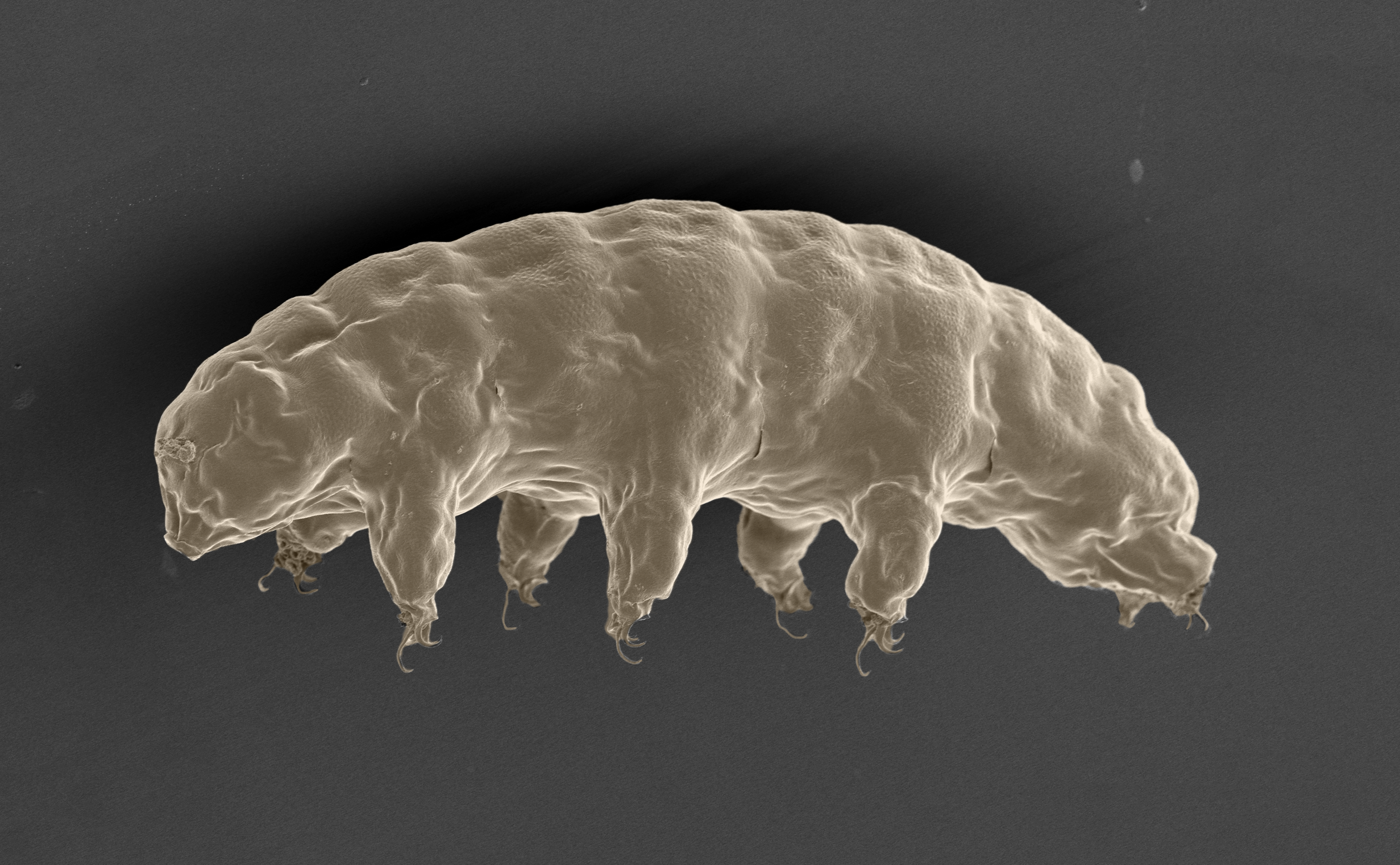 Water bear. Here is a tardigrade captured by an electron microscope. Despite their minuscule size, they contain a bounty of biological secrets. ©2022 S Tanaka, H Sagara, T Kunieda.

“Everything about tardigrades is fascinating. The extreme range of environments some species can survive leads us to explore never-before-seen mechanisms and structures. For a biologist, this field is a gold mine,” said Kunieda. “I’ll never forget New Year’s Day 2019, when I received an email from Tomomi Nakano, another author of the paper. She had been working late trying to see the condensation of CAHS proteins and observed the first CAHS filament networks in human cultured cells. I was astonished at seeing such clearly defined microscopic images of these. It was the first time I had seen such a thing. It was a very happy new year indeed!”

Knowing how to isolate and activate these special proteins, though, is just the beginning. Kunieda and his team plan to sift through more than 300 other kinds of proteins, some of which likely play a role in the incredible life-preserving ability of these tiny water bears.