For the first time, high-energy muon particles created in the atmosphere have allowed researchers to explore the structures of storms in a way that traditional visualization techniques, such as satellite imaging, cannot. The detail offered by this new technique could aid researchers modeling storms and related weather effects. This could also lead to more accurate early warning systems.

It’s hard not to notice the number of stories in the news about heavy storms in different parts of the world, often attributed to climate change. Weather prediction and early warning systems have always been important, but with increased storm activity it seems especially so these days. A team of researchers, led by Professor Hiroyuki Tanaka from Muographix at the University of Tokyo, offer the world of meteorology a novel way of detecting and exploring tropical cyclones using a quirk of particle physics that takes place above our heads all the time.

“You’ve probably seen photographs of cyclones taken from above, showing swirling vortices of clouds. But I doubt you’ve ever seen a cyclone from the side, perhaps as a computer graphic, but never as actual captured sensor data,” said Tanaka. “What we offer the world is the ability to do just this, visualize large-scale weather phenomena like cyclones from a 3D perspective, and in real time too. We do this using a technique called muography, which you can think of like an X-ray, but for seeing inside truly enormous things.”

Muography creates X-ray-like images of large objects, including volcanoes, the pyramids, bodies of water, and now, for the first time, atmospheric weather systems. Special sensors called scintillators are joined together to make a grid, a little like the pixels on your smartphone’s camera sensor. However, these scintillators don’t see optical light, but instead see particles called muons which are created in the atmosphere when cosmic rays from deep space collide with the atoms in the air. Muons are special because they pass through matter easily without scattering as much as other types of particles. But the small amount they do deviate by as they pass through solid, liquid, or even gaseous matter, can reveal details of their journey between the atmosphere and the sensors. By capturing a large number of muons passing through something, an image of it can be reconstructed.

“We successfully imaged the vertical profile of a cyclone, and this revealed density variations essential to understanding how cyclones work,” said Tanaka. “The images show cross sections of the cyclone which passed through Kagoshima Prefecture in western Japan. I was surprised to see clearly it had a low-density warm core that contrasted dramatically with the high-pressure cold exterior. There is absolutely no way to capture such data with traditional pressure sensors and photography.”

The detector the researchers used has a viewing angle of 90 degrees, but Tanaka envisages combining similar sensors to create hemispherical and therefore omnidirectional observation stations which could be placed along the length of a coastline. These could potentially see cyclones as far away as 300 kilometers. Although satellites already track these storms, the extra detail offered by muography could improve predictions about approaching storms.

“One of the next steps for us now will be to refine this technique in order to detect and visualize storms at different scales,” said Tanaka. “This could mean better modeling and prediction not only for larger storm systems, but more local weather conditions as well.” 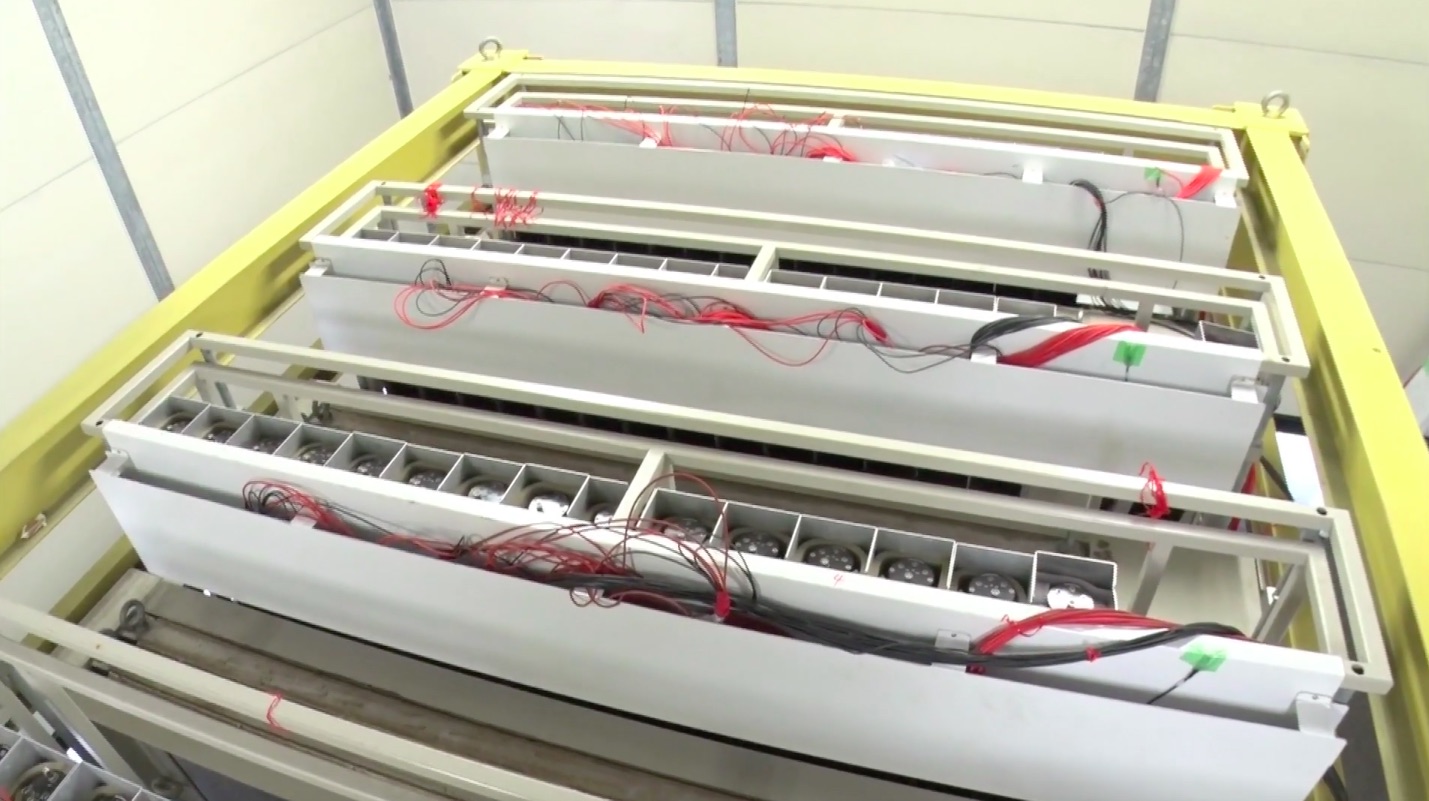 Scintillator sensors. These are the sensors used to detect the weakly interacting muon particles. Each scintillator sensor is extremely dense to maximize the chances that a muon will interact with it. Arranged in a grid, the sensors can form a crude image of whatever the muons passed through to reach the sensor. © 2022 Hiroyuki KM Tanaka 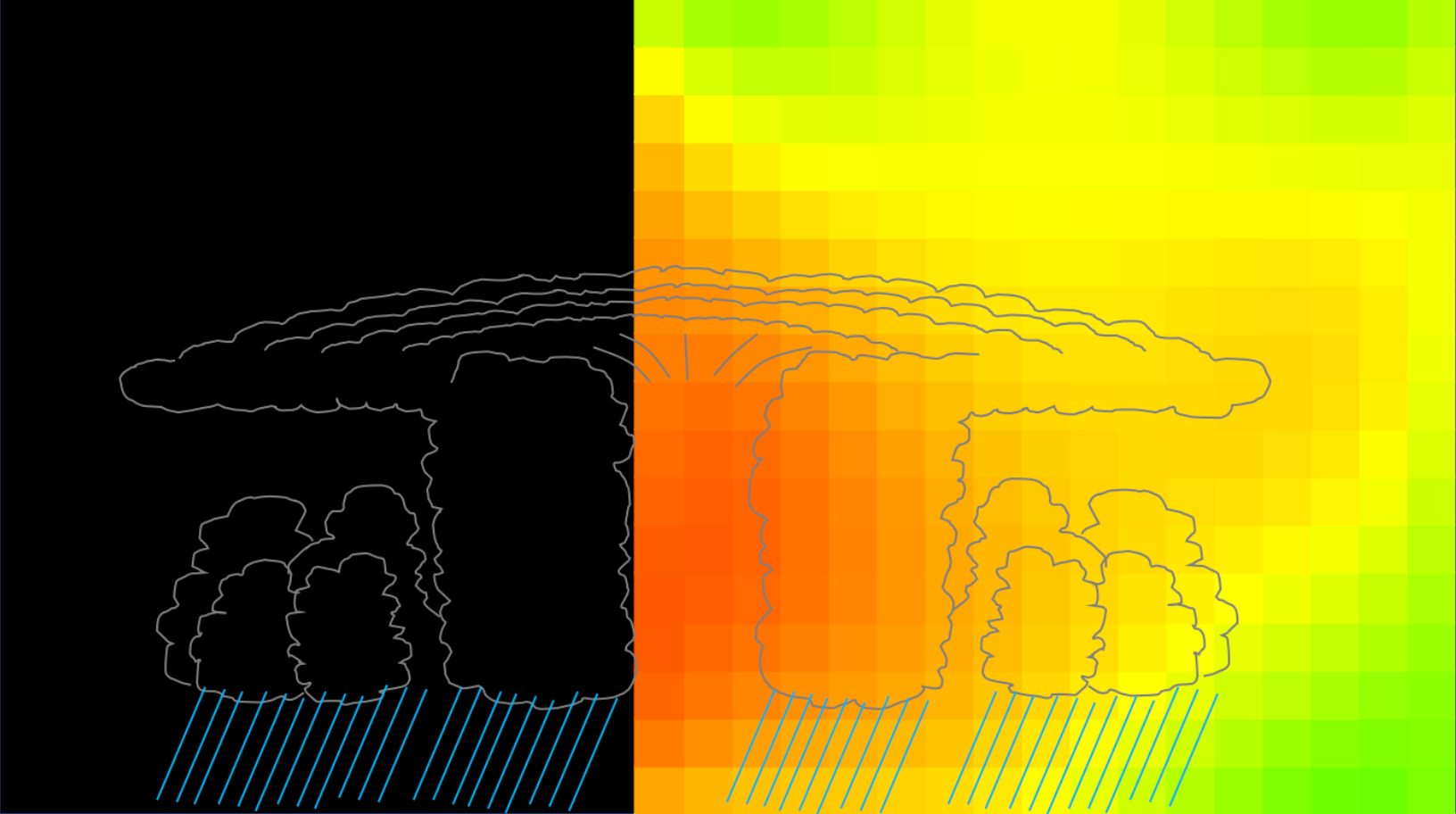 Cyclone muograph. The redder areas are low-pressure warm air, and the green areas are higher-pressure cooler air. The cyclone in this image is about 15 kilometers tall. A line drawing approximating the shape overlays the visualization data. ©2022 Hiroyuki KM Tanaka