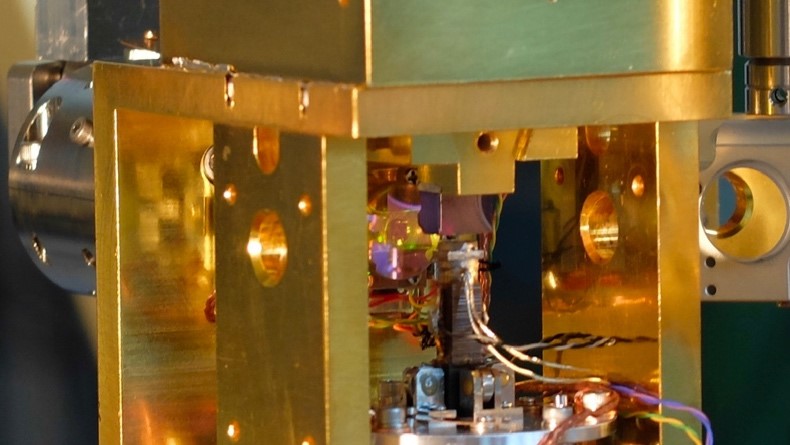 Observation of Bose-Einstein condensates of excitons in a bulk semiconductor using mid-infrared induced absorption imaging realized in a dilution refrigerator
A close-up picture of the apparatus in a cryogen-free dilution refrigerator. A dark red-colored cubic crystal in the center of the picture is cuprous oxide. A zinc selenide meniscus lens placed behind the crystal is an objective lens. A rod and a stage below the crystal is used for generation of an inhomogeneous strain field in the crystal that acts as a trap potential for excitons. ©2022 Yusuke Morita, Kosuke Yoshioka and Makoto Kuwata-Gonokami, The University of Tokyo

Physicists have created the first Bose-Einstein condensate — the mysterious “fifth state” of matter — made from quasiparticles, entities that do not count as elementary particles but that can still have elementary-particle properties like charge and spin. For decades, it was unknown whether they could undergo Bose-Einstein condensation in the same way as real particles, and it now appears that they can. The finding is set to have a significant impact on the development of quantum technologies including quantum computing.

A paper describing the process of creation of the substance, achieved at temperatures a hair’s breadth from absolute zero, was published in the journal Nature Communications.

Bose-Einstein condensates are sometimes described as the fifth state of matter, alongside solids, liquids, gases and plasmas. Theoretically predicted in the early 20th century, Bose-Einstein condensates, or BECs, were only created in a lab as recently as 1995. They are also perhaps the oddest state of matter, with a great deal about them remaining unknown to science.

BECs occur when a group of atoms is cooled to within billionths of a degree above absolute zero. Researchers commonly use lasers and “magnet traps” to steadily reduce the temperature of a gas, typically composed of rubidium atoms. At this ultracool temperature, the atoms barely move and begin to exhibit very strange behavior. They experience the same quantum state — almost like coherent photons in a laser — and start to clump together, occupying the same volume as one indistinguishable “super atom.” The collection of atoms essentially behaves as a single particle. 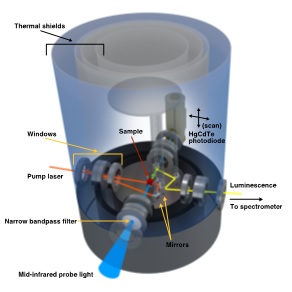 Experimental setup inside the cryogen-free dilution refrigerator
The cuprous oxide crystal (red cube) was placed on a sample stage at the center of the dilution refrigerator. Researchers attached windows to the shields of the refrigerator that allowed optical access to the sample stage in four directions. The windows in two directions allowed transmission of the excitation light (orange solid line) and luminescence from paraexcitons (yellow solid line) in the visible region. The windows in the other two directions allowed transmission of the probe light (blue solid line) for induced absorption imaging. To reduce incoming heat, researchers carefully designed the windows by minimizing the numerical aperture and using a specific window material. This specialized design for the windows and the high cooling power of the cryogen-free dilution refrigerator facilitated the realization of a 64 millikelvin minimum base temperature. ©2022 Yusuke Morita, Kosuke Yoshioka and Makoto Kuwata-Gonokami, The University of Tokyo

Currently, BECs remain the subject of much basic research, and for simulating condensed matter systems, but in principle, they have applications in quantum information processing. Quantum computing, still in early stages of development, makes use of a number of different systems. But they all depend upon quantum bits, or qubits, that are in the same quantum state.

Most BECs are fabricated from dilute gases of ordinary atoms. But until now, a BEC made out of exotic atoms has never been achieved.

An “exciton” is another such example. When light hits a semiconductor, the energy is sufficient to “excite” electrons to jump up from the valence level of an atom to its conduction level. These excited electrons then flow freely in an electric current — in essence transforming light energy into electrical energy. When the negatively charged electron performs this jump, the space left behind, or “hole,” can be treated as if it were a positively charged particle. The negative electron and positive hole are attracted and thus bound together. 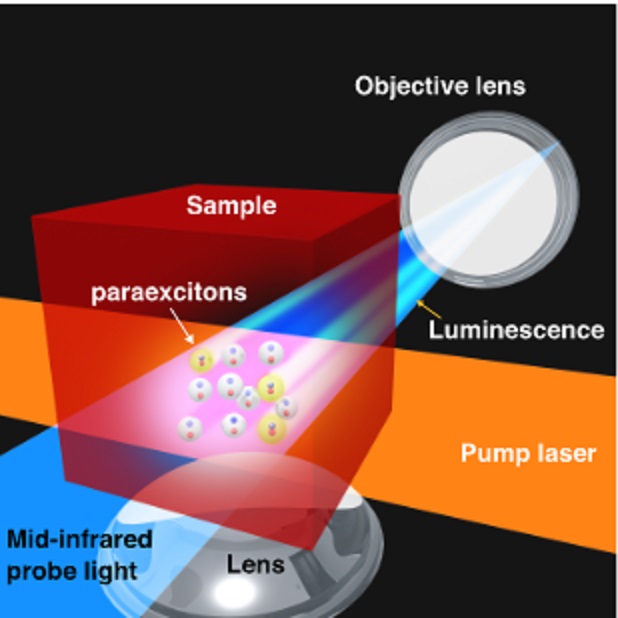 Schematic illustration of the physical processes involved for excitons in the sample
Researchers applied inhomogeneous stress using a lens set under the sample (red cube). The inhomogeneous stress results in an inhomogeneous strain field that acts as a trap potential for excitons. The excitation beam (orange solid line) was focused on the bottom of the trap potential in the sample. An exciton (yellow sphere) consists of one electron (blue sphere) and one hole (red sphere). The team detected excitons by either luminescence (yellow shade) or the differential transmission of the probe light (blue shade). An objective lens set behind the sample collected luminescence from excitons. The probe beam also propagated through the objective lens. ©2022 Yusuke Morita, Kosuke Yoshioka and Makoto Kuwata-Gonokami, The University of Tokyo

Combined, this electron-hole pair is an electrically neutral “quasiparticle” called an exciton. A quasiparticle is a particle-like entity that does not count as one of the 17 elementary particles of the standard model of particle physics, but that can still have elementary-particle properties like charge and spin. The exciton quasiparticle can also be described as an exotic atom because it is in effect a hydrogen atom that has had its single positive proton replaced by a single positive hole.

Electron-hole systems have been used to create other phases of matter such as electron-hole plasma and even exciton liquid droplets. The researchers wanted to see if they could make a BEC out of excitons.

“Direct observation of an exciton condensate in a three-dimensional semiconductor has been highly sought after since it was first theoretically proposed in 1962. Nobody knew whether quasiparticles could undergo Bose-Einstein condensation in the same way as real particles,” said Makoto Kuwata-Gonokami, a physicist at the University of Tokyo and co-author of the paper. “It’s kind of the holy grail of low-temperature physics.”

The researchers thought that hydrogen-like paraexcitons created in cuprous oxide (Cu2O), a compound of copper and oxygen, were one of the most promising candidates for fabricating exciton BECs in a bulk semiconductor because of their long lifetime. Attempts at creating paraexciton BEC at liquid helium temperatures of around 2 K had been made in the 1990s, but failed because, in order to create a BEC out of excitons, temperatures far lower than that are needed. Orthoexcitons cannot reach such a low temperature as they are too short-lived. Paraexcitons, however, are experimentally well known to have an extremely long lifetime of over several hundred nanoseconds, sufficiently long to cool them down to the desired temperature of a BEC.

The team managed to trap paraexcitons in the bulk of Cu2O below 400 millikelvins using a dilution refrigerator, a cryogenic device that cools by mixing two isotopes of helium together and which is commonly used by scientists attempting to realize quantum computers. They then directly visualized the exciton BEC in real space by the use of mid-infrared induced absorption imaging, a type of microscopy making use of light in the middle of the infrared range. This allowed the team to take precision measurements, including the density and temperature of the excitons, that in turn enabled them to mark out the differences and similarities between exciton BEC and regular atomic BEC.

The group’s next step will be to investigate the dynamics of how the exciton BEC forms in the bulk semiconductor, and to investigate collective excitations of exciton BECs. Their ultimate goal is to build a platform based on a system of exciton BECs, for further elucidation of its quantum properties, and to develop a better understanding of the quantum mechanics of qubits that are strongly coupled to their environment.