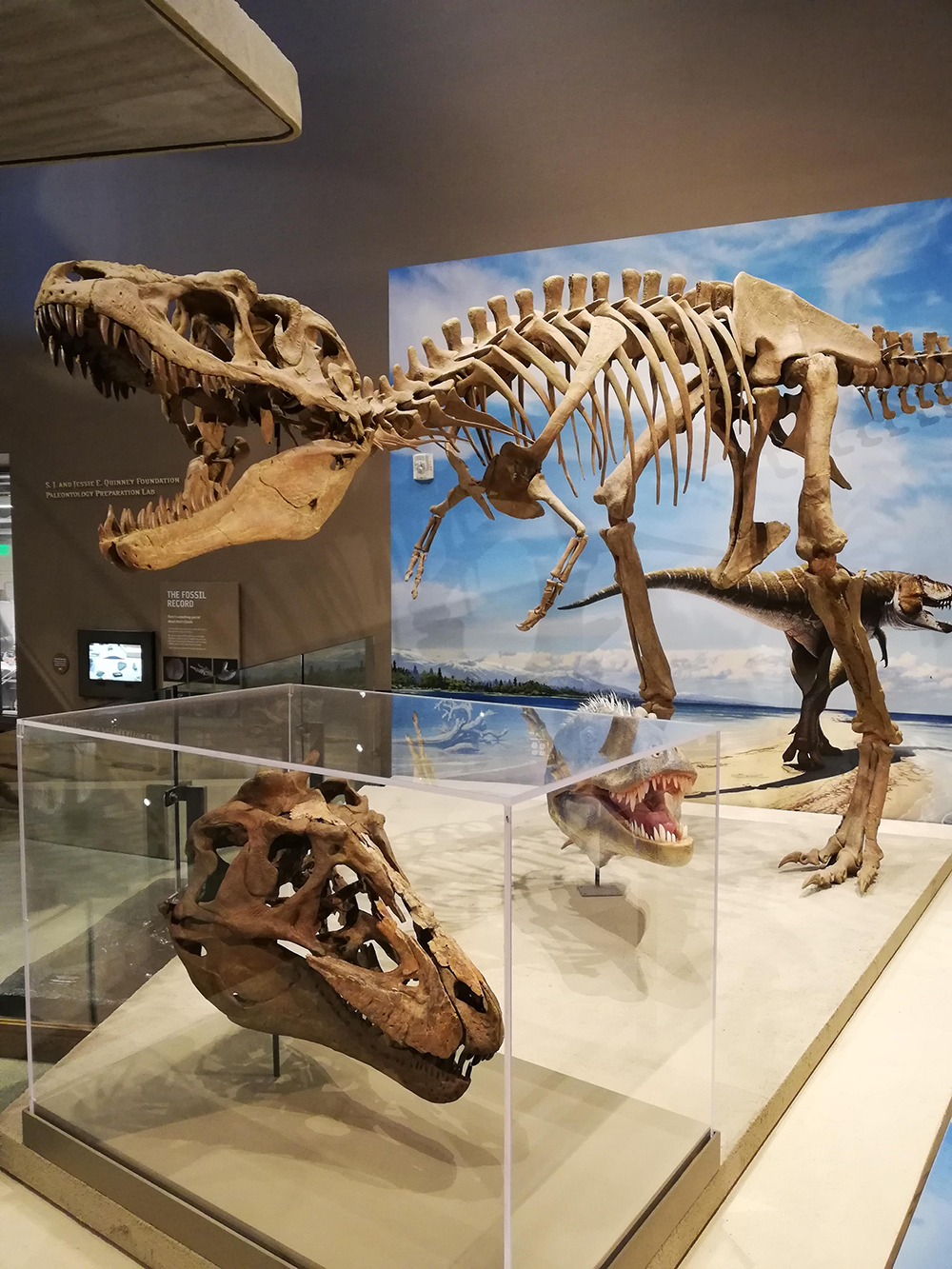 Run for it. This Lythronax lived in North America in the late Cretaceous period. These tyrannosaurids are estimated to have weighed up to 2.5 tons. ©2022 D.E. Winkler

Scratches on dinosaur teeth could reveal what they really ate. For the first time, dental microwear texture analysis has been used to infer the feeding habits of large theropods, including Allosaurus and T. rex. By taking 3D images of individual teeth and analyzing the pattern of marks scratched into them, researchers could reason which dinosaurs may have frequently crunched on hard bone and which may have regularly eaten softer foods and prey. This technique opens up a new avenue of research for paleontology, helping us to better understand not only dinosaurs themselves but also the environment and communities in which they lived.

From Fantasia to Jurassic Park, the T. rex is seen as a terrifying apex predator that would chase down its prey and crunch on it whole. But how much did this iconic dinosaur actually chow down on bones? And what about other predatory dinosaurs that existed long before it?

Researchers from the University of Tokyo, in collaboration with teams from the University of Mainz and the University of Hamburg in Germany, have used dental microwear texture analysis (DMTA), a scanning technique to examine topographical dental wear and tear in microscopic detail, on individual dinosaur teeth from more than 100 million years ago to better understand what they may have eaten. “We wanted to test if we could use DMTA to find evidence of different feeding behaviors in tyrannosaurids (from the Cretaceous period, 145 million to 66 million years ago) compared to the older Allosaurus (from the Jurassic period, 201 million to 145 million years ago), which are both types of theropods,” explained postdoctoral fellow Daniela Winkler from the Graduate School of Frontier Sciences. “From other research, we already knew that tyrannosaurids can crack and feed on bones (from studies of their feces and bite marks on bone). But allosaurs are much older and there is not so much information about them.”

DMTA has mainly been used to study mammal teeth, so this is the first time it was used to study theropods. The same research team from the University of Tokyo also recently pioneered a study on DMTA in Japanese sauropod dinosaurs, famous for their long necks and tails. A high-resolution 3D image was taken of the tooth surface at a very small scale of 100 micrometers (one-tenth of a millimeter) by 100 micrometers in size. Up to 50 sets of surface texture parameters were then used to analyze the image, for example, the roughness, depth and complexity of wear marks. If the complexity was high, i.e., there were different-sized marks which overlaid each other, this was associated with hard object feeding, such as on bone. However, if the complexity was low, i.e., the marks were more arranged, of a similar size and not overlapping, this was associated with soft object feeding, like meat. 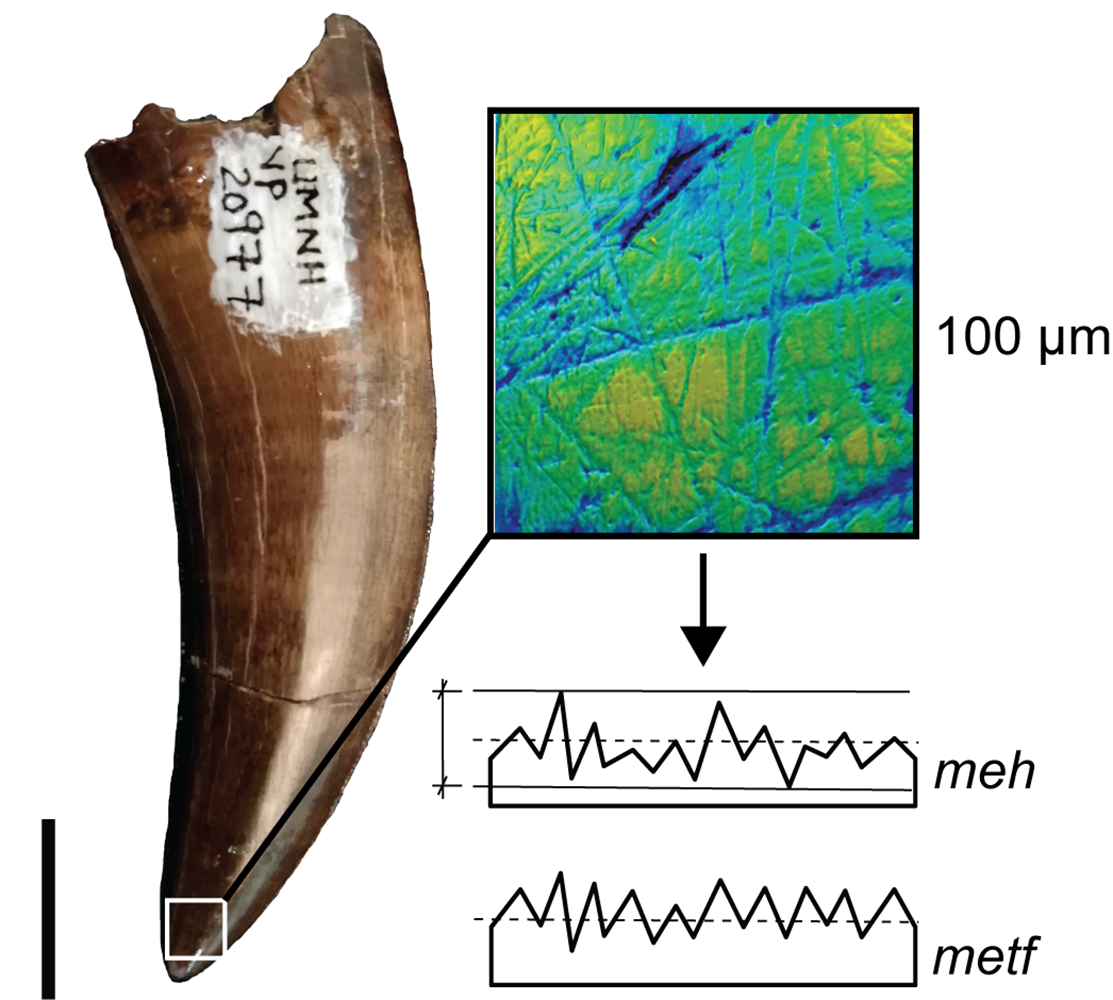 DMTA image of an adult tyrannosaurid tooth. A 100 micrometer-by-100 micrometer (μm) image of the tip of this tooth shows the tiny scratches which were analyzed for complexity and depth of wear features. ©2022 Winkler et al.

In total, the team studied 48 teeth, 34 from theropod dinosaurs and 14 from crocodilians (modern crocodiles and alligators), which were used as a comparison. The team was able to study original fossilized teeth and take high-resolution silicon molds, thanks to loans provided by natural history museums in Canada, the U.S., Argentina and Europe. “We actually started dental microwear research of dinosaurs in 2010,” said Lecturer Mugino Kubo from the Graduate School of Frontier Sciences. “My husband, Dr. Tai Kubo, and I had started collecting dental molds of dinosaurs and their contemporaries in North and South Americas, Europe, and of course Asia. Since Daniela joined my lab, we utilized these molds to make a broader comparison among carnivorous dinosaurs.”

“It was especially challenging to carry out this research during the pandemic,” said Winkler “as we rely on being able to gather samples from international institutions. The sample size might not be so large this time, but it is a starting point.”

Winkler says what they found surprising was that they didn’t find evidence of much bone crushing behavior in either Allosaurus or tyrannosaurids, even though they know that tyrannosaurids ate bone. There may be several reasons for this unexpected outcome. It could be that although Tyrannosaurus was able to eat bone, it was less commonly done than previously thought. Also, the team had to use well-preserved teeth, so it might be that extremely damaged teeth that were excluded from this study were in such a condition because those animals fed more on bone. 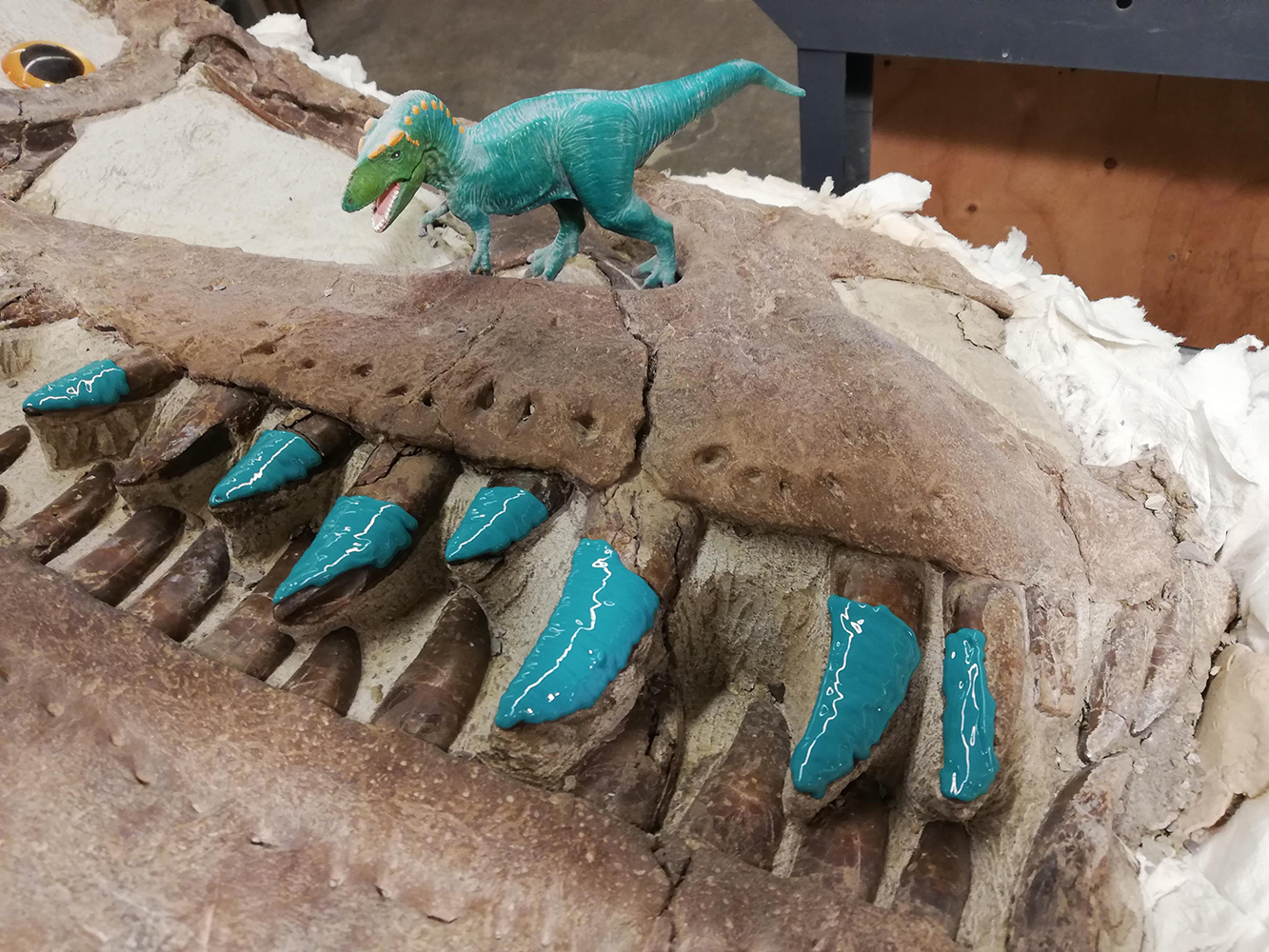 Adult tyrannosaurid teeth (Teratophoneus curriei) at the Natural History Museum of Utah. Blue silicon was carefully excreted from a tube onto the teeth and left to dry for a few minutes to create near-perfect replicas, which were removed and taken from the museum in the U.S. city of Salt Lake City, Utah, to Japan for further study. ©2022 D. E. Winkler

Something the team did find with both the dinosaurs and crocodilians was a noticeable difference between juveniles and adults. “We studied two juvenile dinosaur specimens (one Allosaurus and one tyrannosaurid) and what we found was a very different feeding niche and behavior for both compared to the adults. We found that there was more wear to juvenile teeth, which might mean that they had to more frequently feed on carcasses because they were eating leftovers,” explained Winkler. “We were also able to detect different feeding behavior in juvenile crocodilians; however, this time it was the opposite. Juvenile crocodilians had less wear on their teeth from eating softer foods, perhaps like insects, while adults had more dental wear from eating harder foods, like larger vertebrates.”

Winkler says that the next step with dinosaurs will probably be to look in more detail at the long-necked sauropods, which the team has also been studying. But for now, she is experimenting with something much, much smaller: crickets. The insects’ mouths may be tiny and don’t have any teeth, but the researchers want to see if they can still find evidence of mouth wear using the same technique. “From what we learn using DMTA, we can possibly reconstruct extinct animals’ diets, and from this make inferences about extinct ecosystems, paleoecology and paleoclimate, and how it differs from today.” said Winkler. “But this research is also about curiosity. We want to form a clearer image of what dinosaurs were really like and how they lived all those millions of years ago.”