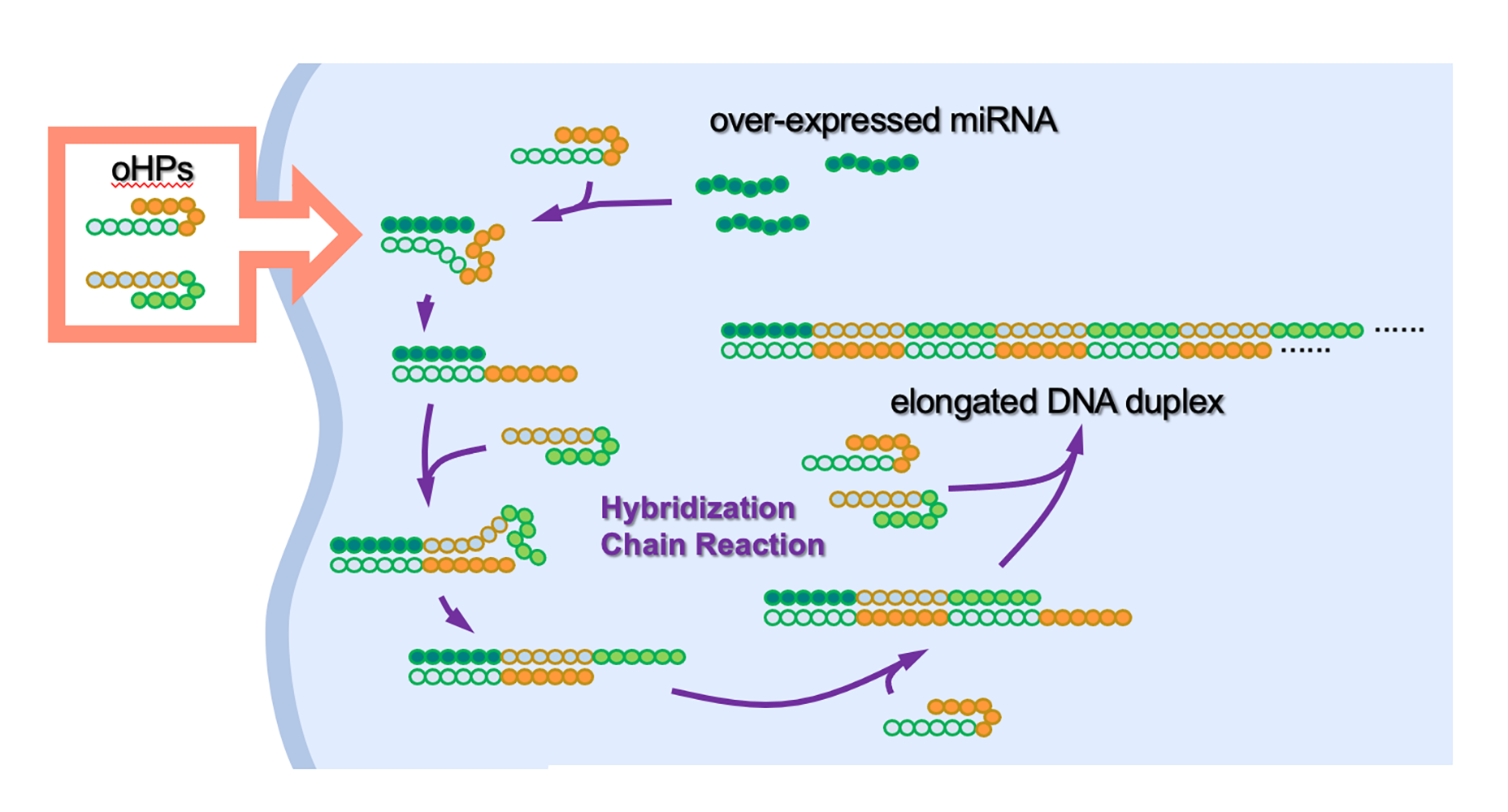 Cancer cell. Oncolytic DNA hairpin pairs (oHPs) are introduced to the cancer cell. When the oHPs encounter the tumor-causing overexpressed microRNA (miRNA), they unravel to connect with the miRNA and each other to form longer DNA strands. These elongated strands then trigger an immune response, the body’s built-in defense mechanism, which inhibits further tumor growth. © 2022 Akimitsu Okamoto

Researchers at the University of Tokyo have used artificial DNA to target and kill cancer cells in a completely new way. The method was effective in lab tests against human cervical cancer- and breast cancer-derived cells, and against malignant melanoma cells from mice. The team created a pair of chemically synthesized, hairpin-shaped, cancer-killing DNA. When the DNA pairs were injected into cancer cells, they connected to microRNA (miRNA) molecules that are overproduced in certain cancers. Once connected to the miRNA, they unraveled and joined together, forming longer chains of DNA which triggered an immune response. This response not only killed the cancer cells but prevented further growth of cancerous tissue. This method is different from conventional anticancer drug treatments and is hoped to bring about a new era of drug development.

Cancer is a sadly familiar global health concern and current methods of treatment have their limitations. However, drugs based on nucleic acids — namely DNA and RNA, the vital information-carrying molecules — can control the biological functions of cells, and are expected to transform the future of medicine and provide a significant boost towards efforts to overcome cancer and other hard-to-treat illnesses, caused by viruses and genetic diseases.

A research group at the University of Tokyo, led by Assistant Professor Kunihiko Morihiro and Professor Akimitsu Okamoto from the Graduate School of Engineering, were inspired to create a new anticancer drug using artificial DNA. “We thought that if we can create new drugs that work by a different mechanism of action from that of conventional drugs, they may be effective against cancers that have been untreatable up to now,” said Okamoto.

Nucleic acid drug use for cancer treatment has been challenging because it is difficult to make the nucleic acids distinguish between cancer cells and other healthy cells. This means there is a risk of adversely affecting the patient’s immune system if healthy cells are inadvertently attacked. However, for the first time, the team was able to develop a hairpin-shaped DNA strand that can activate a natural immune response to target and kill specific cancerous cells. 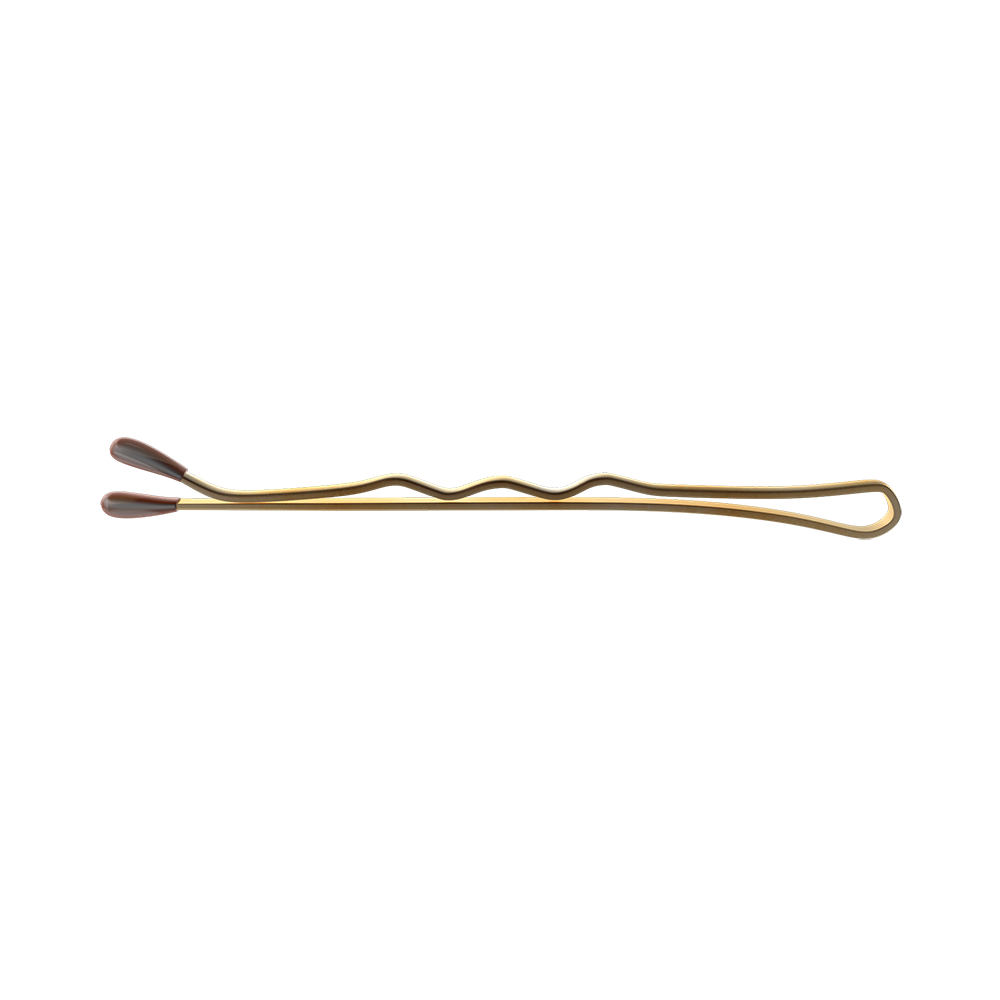 Hairpin. The hairpin shape of oHPs is usually fixed, just like with metal bobby pins, so these new artificial oHPs are unique in the way they can unravel. © Envato Elements

Cancer cells can overexpress, or make too many copies of, certain DNA or RNA molecules, causing them to not function normally. The team created artificial oncolytic (cancer-killing) hairpin DNA pairs called oHPs. These oHPs were triggered to form longer DNA strands when they encountered a short (micro) RNA called miR-21, which is overexpressed in some cancers. Typically, oHPs don’t form longer strands due to their curved hairpin shape. However, when the artificial oHPs enter a cell and encounter the target microRNA, they open up to combine with it and form a longer strand. This then causes the immune system to recognize the presence of the overexpressed miR-21 as dangerous and activate an innate immune response, which ultimately leads to the death of the cancer cells.

The tests were effective against overexpressed miR-21 found in human cervical cancer-derived cells, human triple-negative breast cancer-derived cells, and mouse malignant melanoma-derived cells. “The formation of long DNA strands due to the interaction between short DNA oHPs and overexpressed miR-21, found by this research group, is the first example of its use as a selective immune amplification response which can target tumor regression, providing a new class of nucleic acid drug candidates with a mechanism that is completely different from known nucleic acid drugs,” said Okamoto.

“The results of this study are good news for doctors, drug discovery researchers and cancer patients, as we believe it will give them new options for drug development and medication policies. Next, we will aim for drug discovery based on the results of this research, and examine in detail the drug efficacy, toxicity and potential administration methods.” This research still has many steps to go before a treatment can be made available, but the team is confident in the benefits of nucleic acids for new drug discovery.