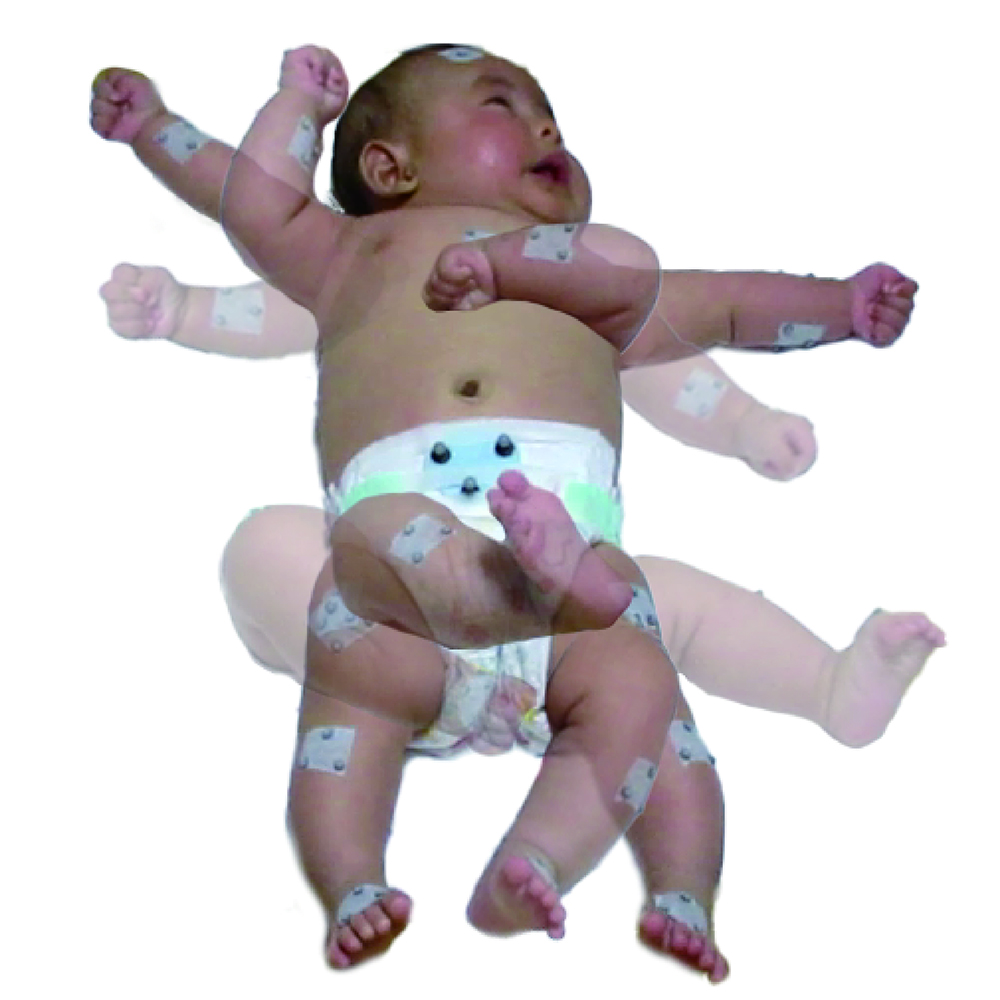 Spontaneous movements. The markers for the motion capture camera were gently applied to the baby’s limbs and head and belly, enabling the team to capture the full range of movement.©2022 Kanazawa et al.

Spontaneous, random baby movements aid development of their sensorimotor system, according to new research led by the University of Tokyo. Detailed motion capture of newborns and infants was combined with a musculoskeletal computer model, to enable researchers to analyze communication among muscles and sensation across the whole body. Researchers found patterns of muscle interaction developing based on the babies’ random exploratory behavior, that would later enable them to perform sequential movements as infants. Better understanding how our sensorimotor system develops could help us gain insight into the origin of human movement as well as earlier diagnosis of developmental disorders.

If you’ve spent time with a baby, you’ll probably have noticed that they hardly keep still. Right from birth — and even in the womb — babies start to kick, wiggle and move seemingly without aim or external stimulation. These are called “spontaneous movements” and researchers believe that they have an important role to play in the development of the sensorimotor system, i.e., our ability to control our muscles, movement and coordination. If we can better understand these seemingly random movements and how they are involved in early human development, we might also be able to identify early indicators for certain developmental disorders, such as cerebral palsy.

Currently, there is limited knowledge about how newborns and infants learn to move their body. “Previous research into sensorimotor development has focused on kinematic properties, muscle activities which cause movement in a joint or a part of the body,” said Project Assistant Professor Hoshinori Kanazawa from the Graduate School of Information Science and Technology.  “However, our study focused on muscle activity and sensory input signals for the whole body. By combining a musculoskeletal model and neuroscientific method, we found that spontaneous movements, which seem to have no explicit task or purpose, contribute to coordinated sensorimotor development.”

Combining data. Data from the motion capture was combined with the musculoskeletal computer simulation, which enabled the team to understand the flow of information along muscles and the babies’ perception of their movement.©2022 Kanazawa et al.

First, the team recorded the joint movements of 12 healthy newborns (less than 10 days old) and 10 young infants (about 3 months old) using motion capture technology. Next, they estimated the babies’ muscle activity and sensory input signals with the aid of a whole-body, infant-scale musculoskeletal computer model which they had created. Finally, they used computer algorithms to analyze the spatiotemporal (both space and time) features of the interaction between the input signals and muscle activity.

“We were surprised that during spontaneous movement, infants’ movements “wandered” and they pursued various sensorimotor interactions. We named this phenomenon ‘sensorimotor wandering,’” said Kanazawa. “It has been commonly assumed that sensorimotor system development generally depends on the occurrence of repeated sensorimotor interactions, meaning the more you do the same action the more likely you are to learn and remember it. However, our results implied that infants develop their own sensorimotor system based on explorational behavior or curiosity, so they are not just repeating the same action but a variety of actions. In addition to this, our findings provide a conceptual linkage between early spontaneous movements and spontaneous neuronal activity.” 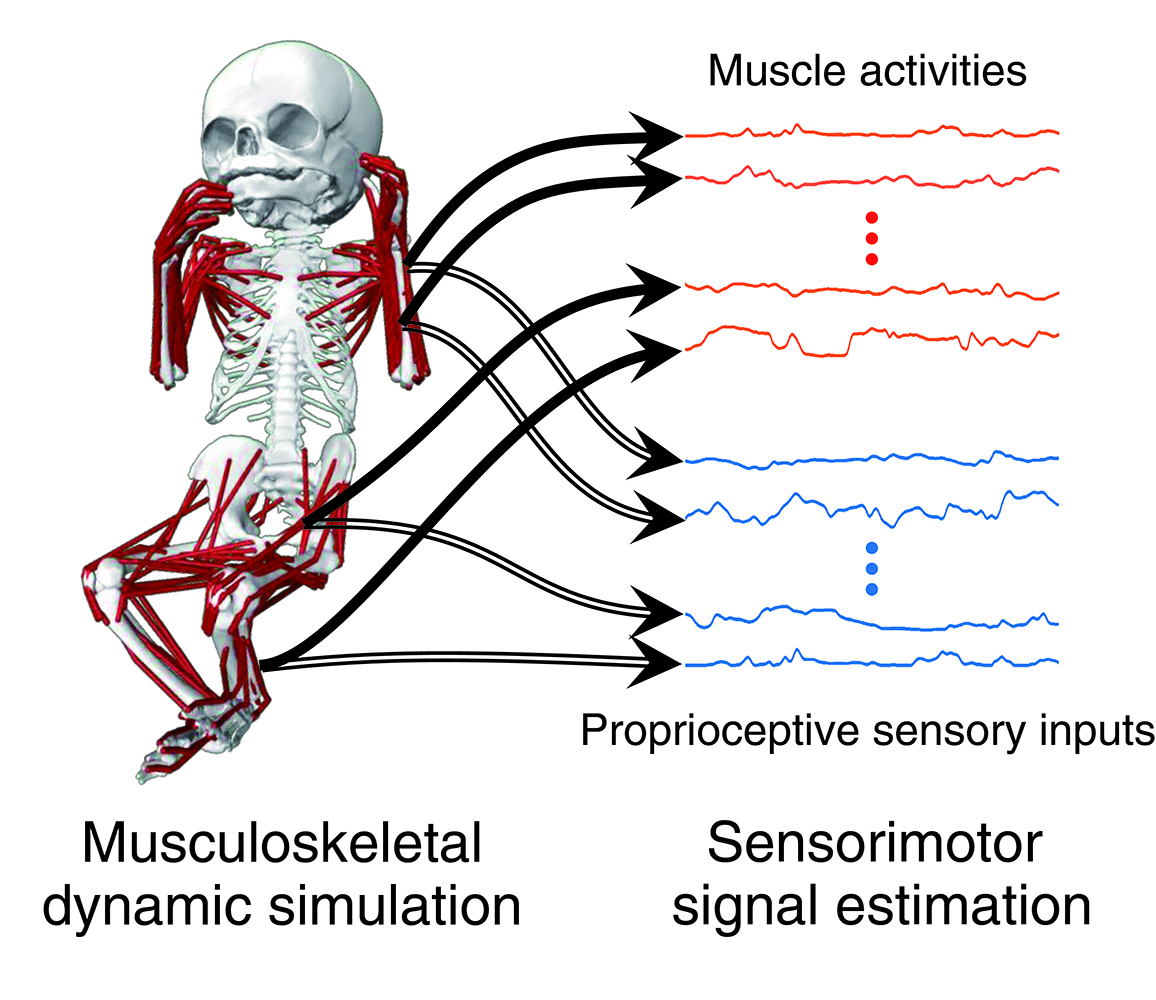 Whole body simulation. This simulation was based on an adult model and infant skeleton. ©2022 Kanazawa et al.

Previous studies on humans and animals have shown that motor behavior (movement) involves a small set of primitive muscular control patterns. These are patterns that can typically be seen in task-specific or cyclic movements, like walking or reaching. The results of this latest study support the theory that newborns and infants can acquire sensorimotor modules, i.e., synchronized muscle activities and sensory inputs, through spontaneous whole-body movements without an explicit purpose or task. Even through sensorimotor wandering, the babies showed an increase in coordinated whole-body movements and in anticipatory movements. The movements performed by the infant group showed more common patterns and sequential movements, compared to the random movements of the newborn group.

Next, Kanazawa wants to look at how sensorimotor wandering affects later development, such as walking and reaching, along with more complex behaviors and higher cognitive functions. “My original background is in infant rehabilitation. My big goal through my research is to understand the underlying mechanisms of early motor development and to find knowledge that will help to promote baby development.”