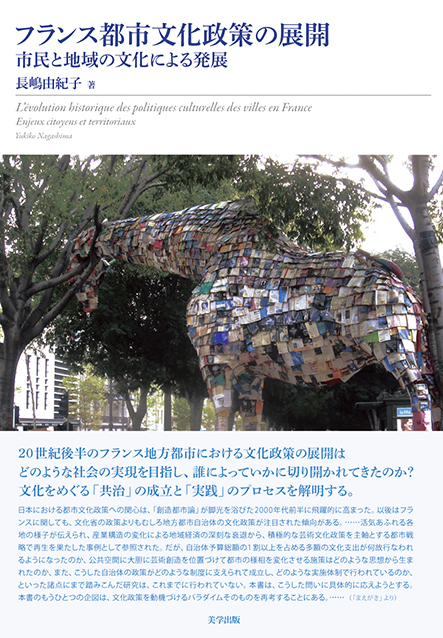 In Japan, French cultural policies have been referred to many times in the past. However, the information has always been selected and introduced only according to short-term domestic interests. For example, the art-support policy of French Ministry of Culture attracted much attention in the 1990s when the Japanese government was aiming to build a “Culturally Oriented Nation”. On the other hand, at the beginning of the 21st century, some local governments’ cultural policies were seen as successful examples of urban regeneration, under the framework of the “Creative City.”

This book has deliberately secured a long-term axis and a wide field of view by following the transition of the philosophy of city cultural policy. Besides, we discuss policy-making processes via an approach that focuses on the interaction among different actors such as mayors, members of municipal assemblies, cultural institution professionals, artists, central government officials, civil society groups, and individuals as citizens. This approach stems from the viewpoint that a city is a society composed of a variety of people with different values.

The focus is on discussions of cultural policy considering the following stages: resistance during World War II under the Vichy regime and liberation from occupation by Nazi Germany, post-war civil society regeneration (Chapter 1); decolonization, May 1968, the growth of progressive municipalities in the 1970s, the beginning of multicultural societies after the oil crisis (Chapter 2); the decentralization reform after 1982 (Chapter 3); and the deepening of European integration until the end of the 20th century (Chapter 4). To focus on remarkable changes in the philosophy of policy in each phase, we selected Grenoble; Nantes and the neighboring municipalities; Lille and its Region; and Marseille. By analyzing the records of local cultural institutions and the convention documents signed by the central and local governments, we show the roles expected of city cultural policies in each period.

This research reveals that the evolution of city cultural policy in France was attained by solidarity and action for the realization of real democracy by people who witnessed the repeated crisis of democracy in contemporary history. The first public interest expected from city cultural policy was to build a public sphere where discussions and communication among diverse individuals breathe through culture and art, and to prepare an environment that fosters the active participation of all citizens in public issues. Local governments’ awareness of the economic development of cities and regions increased after decentralization. These two directions are not contradictory; they co-exist in layers.

The very basic principle of cultural policy, which is to respect each individual with dignity, may now be difficult to observe from afar; however, it does exist in the undercurrent. This book will conclude by suggesting a reconsideration of the universal and basic value of democracy in cultural policy.