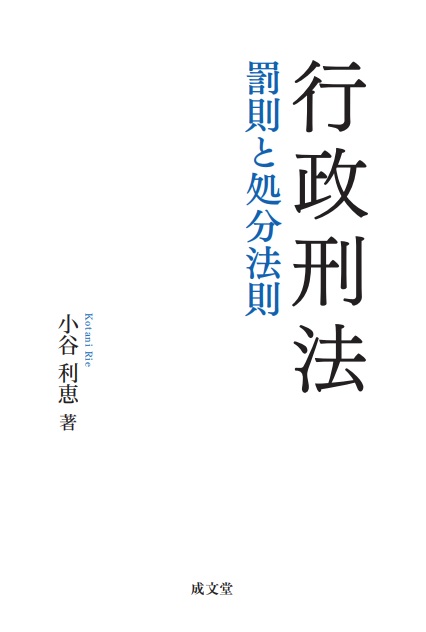 This book aims to elucidate the history of the establishment and transition of penalties under administrative laws and regulations, studied under “administrative criminal law” in Japanese academia by investigating and discussing them from a historical perspective. The research results focus on the period from the beginning of the Meiji era (1868) to the introduction of the former Penal Code (Proclamation 36 of 1880).

Currently, “imprisonment,” “fines,” and “petty fines,” the punishments stipulated in the Penal Code (Act No. 45 of 1907), are often used as means for disposition under administrative laws and regulations. In some cases, “civil fines,” which are non-penal fines, are imposed.

For the former, on the basis of the fact that Article 8 of the Penal Code stipulates that “The general provisions of this Part also apply to crimes for which punishments are provided by other laws and regulations, except when special provisions are provided in such laws and regulations.” it has been understood that the general provisions of the Penal Code and the Code of Criminal Procedure are applied in principle for both administrative and criminal law in Japanese academia.

On the other hand, some precedents do not apply to the general provisions of the Penal Code even though there are no explicit special provisions.

In his book Gyōsei Keihō Gairon (Introduction to Administrative Criminal Law, 1939, Iwanami Shoten), Dr. Tatsukichi Minobe, a pioneer in the study of administrative criminal law, distinguishes such law from the original criminal law and argues that it is necessary to establish special general provisions without applying the general provisions of the Penal Code. Moreover, he states that there are cases wherein the application of Article 8 of the Penal Code should be excluded not only when explicitly excluded by regulations but also as a matter of course in interpretation.

Based on these academic and practical views and the recognition of five issues that arose while reviewing the literature, administrative regulations, and criminal laws, this research focuses on empirically organizing and presenting various points that have not yet been clarified, using a variety of official documents from the early Meiji period and adding explanations with the help of previous research.

The details of these circumstances, combined with their relationships with other legal systems, are surprising and indicate the need to reconsider the legal system related to penalties. This book hopes to understand exactly how the legal system was established and enforced. It also hopes to find in the official documents, which show earnest consultations, the image of officials who care about the state of the nation and the lives of its citizens and residents, in order to become a force that will support academia and the three powers now and in the future.