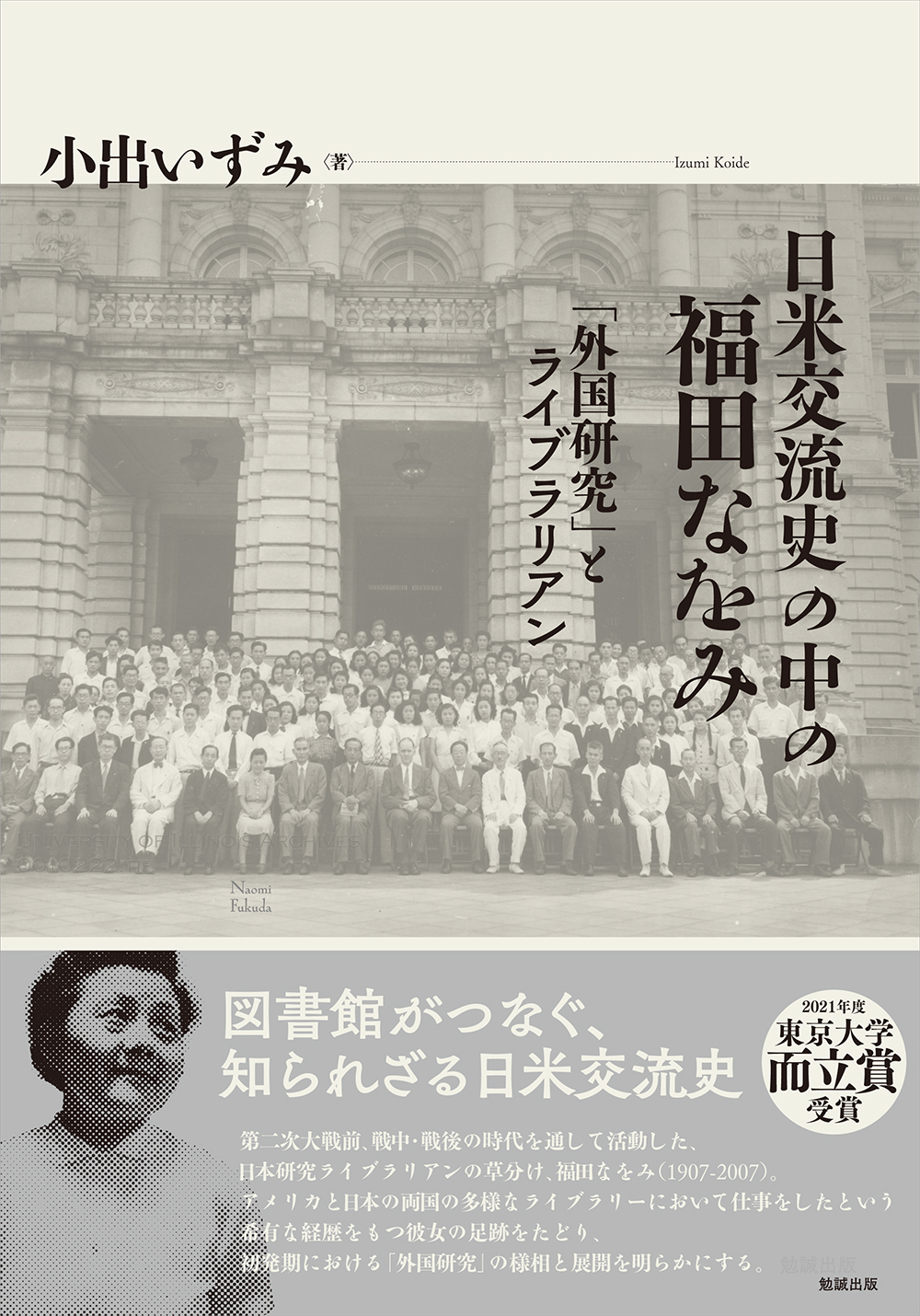 Nichi-bei koryu-shi no naka no Fukuda Naomi (Naomi Fukuda and the History of Japan-U.S. Exchange – “Foreign Area Studies” and the Librarian)

Naomi Fukuda (1907-2007) was a pioneering librarian who worked in foreign area studies libraries in both Japan and the United States before, during, and after the Pacific War. Focusing on Fukuda’s lifework, this book explores the evolution of foreign information resources in Japan and the U.S. by examining the information materials and systems that the two countries developed in order to study each other.

The first chapter describes Fukuda’s formative years and her experience studying in the United States, which shaped her choice between two professions: teacher of Japanese language or librarian. Tracing Fukuda’s work at the Tokyo Imperial University Library and the Ministry of Foreign Affairs, the second chapter depicts the beginnings of American studies and the collection of information resources for academic purposes, as well as the information gathering conducted by the Foreign Ministry. For both countries, the mutual collection of materials and knowledge about each other which originally began in the spirit of goodwill changed in character to the gathering of enemy information.

Fukuda worked for the General Headquarters of the Supreme Commander of the Allied Powers during its occupation of Japan. Chapter three looks at library and information resources during wartime and under the occupation government. During the war, the U.S. Government used source materials in Japanese to produce English-language information materials needed for the war. These documents constituted basic information resources for Occupation policies, for the aim of enemy information collection was to cover all aspects of the target country. Later this methodology was introduced for foreign area studies in the U.S. after the war. Fukuda played a crucial role in bridging the library policies of the GHQ and Japanese libraries, particularly when the mission of the National Diet Library transitioned from serving only the Diet to a broader mandate of serving the nation and the Japanese people.

The fourth chapter covers Fukuda’s activities as head librarian of the International House of Japan. With the support of the American Library Association, she organized a field trip of Japanese librarians to study American libraries. The author analyzes the significant impact this trip had on the development of Japanese librarianship. Since the majority of the I-House Library users were visiting scholars, Fukuda started collecting books on Japan in English while remaining responsive to the demand for Japanese primary source materials. As a result the library began to focus on Japanese studies rather than on cultural exchange.

Chapter five reviews the development of Japanese language education in the US followed by a discussion of Fukuda’s work in university libraries in America. When working at the University of Maryland where the GHQ documents are stored, Fukuda came face to face with the many issues involved in handling both primary source materials and general library materials. At the University of Michigan Library Fukuda built a Japanese research collection which included many primary source materials, thus improving the availability of archival materials for use in the research library setting and illustrating the need for a close relationship between primary and secondary sources.

In the last chapter the author posits that there are, broadly speaking, two types of Japan studies library collections, which she differentiates by analyzing the different phases of research in relation to the language of the research material used. Library collections of books on Japan in English represent the outcome or final product of research, while Japanese-language collections in the US provide the materials needed for conducting research; in other words, the two types of collections have a complimentary relationship in the research cycle. The author also discusses issues surrounding collections in research libraries which include archival materials, and points out the necessity of maintaining accessibility to primary source materials. In this respect, mutual understanding is required between professionals of libraries and archives.

When considering the process of knowledge formation in foreign area studies, it is clear that international access to information materials is crucial. This holds true not only for the past history of foreign studies but also for current and future research needs.

Related Article:
Catalyst for the Professionalization of Librarianship in Postwar Japan: Naomi Fukuda and the United States Field Seminar of 1959  (Asian Cultural Studies No.39 p.65-78  2013)
https://icu.repo.nii.ac.jp/?action=pages_view_main&active_action=repository_view_main_item_detail&item_id=4196&item_no=1&page_id=13&block_id=28