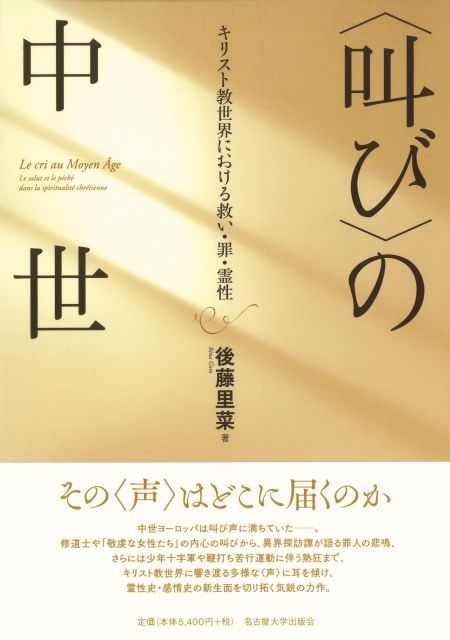 Sakebi no Chusei (Cries in the Middle Ages - Salvation, Sin and Spirituality in the Christian World)

The Middle Ages in Europe. At first glance, a somber age lying between ancient Europe, which gave birth to a brilliant culture and civilization, and the Renaissance, in which the culture of ancient Europe was revived to cause technologies and art to blossom in all their glory.

The characteristic of the Middle Ages is that Christianity covered the world. As leaders of the times and culture, clerics and monks also monopolized reading and writing with letters. In contrast, ordinary believers, who comprised the vast majority of the population, lived in a world of voices and sounds. From the perspective of “cries,” a special form of the voice, this book has attempted to shed light on the whole of the European Middle Ages, including the mentality of ordinary believers.

At the time of his punishment by crucifixion the incarnated Jesus Christ cried out to God from the cross. That was an archetype that precisely indicated that “cries” are uttered when a human pleads with God for salvation.

At the same time, it is clear that “cries” also have the meaning of being a mark of sin. There was always a long drawn-out animal-like wail when a saint cured a person of possession by the Devil, and there is no end of stories about, for example, the “cries” of sinners suffering in the other world that can be heard from the bottom of a well.

Thus, “cries” were associated with both salvation and sin. This book pursues the nature of this connection and its transformations through various kinds of historical materials such as monastery discipline and customary discipline, the biography and writings of monks, hagiographies, exemplae (anthologies of true stories which aim at teaching virtues and vices), tales of visits to the other world, and chronicles of the times.

Having captured a rough overall view of “cries” in Chapter 1, Chapters 2 and 3 turn the spotlight on the period from the latter half of the 12th century and the 13th century, in which changes are seen in the meaning and role of “cries.” Chapter 2 focuses on pious women, while Chapter 3 looks at religious movements in which ordinary believers participated.

The prototypical woman in the Christian world is Eve, the deeply sinful one who created the reason for the exile from the garden. Further, while men are linked with the mind and rationality, women tend to be associated with the body and emotions. As emotional women get angry, cry and shout, they came to be associated with “cries” as the mark of sin.

From around the 12th century, however, a change began to appear. With Christianity permeating the whole of society and the belief in the sufferings of Christ deepening, women began to appear who cried out while empathizing throughout their heart and body with, for example, the suffering of Christ on the cross. In addition, not only shouting out to God, even women emerged who were blessed with “cries” from God. Where would this kind of “cry” of salvation take humans?

“Cries” were originally important constituent elements of religious movements by groups of people. Order could be created by everyone crying out. However, if the people who should have been crying toward the outside, to God, discovered the echo of those cries inside themselves…

“Cries” that connect God and people and people with people. The author very much hopes that this book, that has been written while exploring a wide range of historical materials, will communicate to the reader the fascination of the inconspicuous Middle Ages.