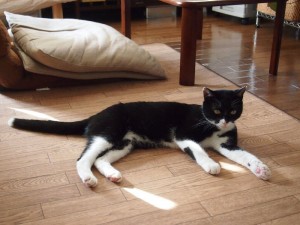 Recent studies demonstrated that domesticated animals such as dogs and horses have an advanced ability to understand human social cognition. On the other hand, the social cognition of domestic cats, one of the most popular companion animals along with dogs, has not been investigated as much as that of dogs.

Dr. Atsuko Saito, a lecturer in Graduate School of Arts and Sciences, the University of Tokyo, investigated how cats recognize human voices that called out their names. As a result, cats responded to calling mainly by orienting behavior such as moving the head and ears, but not by communicative behavior such as tail movements and vocalizing. However, it was also demonstrated that cats distinguished their owner’s voice from strangers’ voices.

The present study scientifically confirms the long-held image of the “aloof cat,” but reveals that socio-cognitive ability lies behind this image. It is expected that cats will become an important species for the comparative study of social cognition in domesticated animals.