Disturbance of shallow-marine seafloor ecosystem by the 2011 tsunami Findings from scuba diving expeditions in 2010, 2011 and 2012

Huge tsunami waves have a severe impact on shallow marine ecosystems. To elucidate the ecological impact of a tsunami on the nearshore zone, data must be obtained on the seafloor environment and benthic animals under pre- and post-event conditions. However, it is extremely difficult to investigate conditions prior to an event, as megathrust earthquakes and associated tsunami are only predictable with low precision. 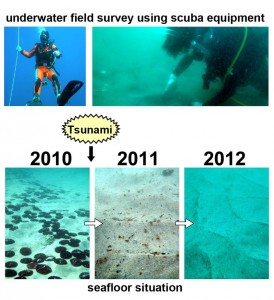 The researchers documented episodic changes in topography and grain-size composition that occurred on the seafloor after the tsunami. Some benthic animals disappeared after the 2011 tsunami, synchronous with changes in the seafloor environment. This indicates that the 2011 tsunami severely impacted the megafaunal assemblage in the soft bottoms of the ria coasts. In addition, it was found that the reestablishment of some benthic animal populations began within 18 months of the tsunami disturbance.

This research was published in the online journal PLOS ONE on 8 June 2013.