An understanding of the structure of the Sun’s magnetic field between it and the Earth is essential if humanity is to venture into space. However, it is extremely difficult to directly observe the coronal magnetic structure within the Earth’s orbit, and while spacecraft such as Voyager and Ulysses have carried out some observations, the solar neighborhood is an extremely harsh environment characterized by high temperatures and high levels of radiation. Even the latest spacecraft cannot get close, and as a result our understanding of this region is limited. 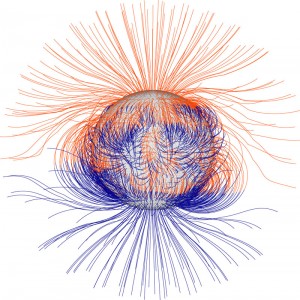 An international group of scientists participating in the Tibet ASγ experiment, which is led by Institute for Cosmic Ray Research (ICRR) at the University of Tokyo in cooperation with Chinese researchers, observed the Sun’s shadow, created when it blocks galactic cosmic rays from reaching the Earth. The coronal magnetic field deflects these charged particles as they pass near the Sun, causing variation in the form of the Sun’s shadow. The researchers analyzed data gathered over a 14-year period from 1996 to 2009, and discovered a correlation between the 11-year solar cycle and this variation. The group also developed and performed numerical simulations, based on two major coronal magnetic field models ? the Potential Field Source Surface (PFSS), and the Current Sheet Source Surface (CSSS). The PFSS model leaves out the effect of the electric current in the vicinity of the Sun on the structure of the coronal magnetic field, while the CSSS model assumes the effect of the electric current. The group’s simulation of the trajectories of galactic cosmic rays based on the two models found that the CSSS model better describes the size variation of the Sun’s shadow. This is the world’s first and most successful analysis of the coronal magnetic structure using the data obtained by the observation of the cosmic ray shadow of the Sun.

This research provides a new approach to exploring the Sun’s magnetic structure and, with future increased in accuracy, should provide even more detailed knowledge. This research employed the phenomenon that the path of charged cosmic rays is bent when it passes through a magnetic field, and was made possible by the long-term accumulation of cosmic radiation data over a period of 14 years, and is a major step forward in the long-term observation of cosmic radiation.

This paper was highlighted as one of the “Editor’s Suggestions” in Physical Review Letters (PRL).

The American Physical Society (APS) featured this paper on its website with short summary:
Synopsis: Catching Rays in the Sun’s Shadow