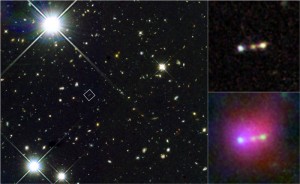 © NASA, ESA, The University of Tokyo (M. Ouchi) A composite color image of Himiko based on Hubble, Subaru, and Spitzer data. The left panel shows the field around Himiko as viewed by Hubble: the position of Himiko is marked with a square. The right panels show close up views of the Hubble image (top) and a combination of Hubble, Subaru, and Spitzer images (bottom). In the Hubble image, infrared light captured by Hubble’s Wide Field Camera 3 at 0.98, 1.25, and 1.6 microns is shown as blue, green, and red, respectively. In the Hubble/Subaru/Spitzer image, the combination of three Hubble infrared bands is green, while Lyman alpha emission captured by Subaru Suprime-Cam and infrared 3.6 micron taken by Spitzer Infrared Array Camera are shown as blue and red, respectively.

The light from the remarkable giant “space blob” Himiko (named after a legendary queen of ancient Japan) reaches us from a time when the universe was only 800 million years old, corresponding to just 6% of its present age. Himiko was discovered in 2009 by Associate Professor Masami Ouchi of the University of Tokyo’s Institute of Cosmic Ray Research (then Carnegie Fellow at the Carnegie Observatories) using the Subaru telescope on Mauna Kea, Hawaii. At that time Himiko was shown to be a mysterious body consisting of a hot, bright gas cloud extending over 55,000 light years, but its source of energy remained unknown.

Using the Hubble Space Telescope and instruments on the Atacama Large Millimeter/Submillimeter Array (ALMA), Ouchi and his collaborators have explored Himiko’s physical nature. The new observations reveal a complex structure suggestive of a rare triple merger of three galaxies, resulting in violent star formation and which is creating the brilliantly-lit gas cloud. Most surprisingly, the possible absence of heavy chemical elements, which were created after the big bang, indicates Himiko’s primitive nature. The observations provide valuable insight into the earliest stages of galaxy formation at a time termed ‘Cosmic Dawn’ when the Universe was first bathed in starlight.