With large-area imaging data from the Subaru Telescope, a team of international astronomers led by Dr. Suraphong Yuma (JSPS Fellow) and Dr. Masami Ouchi (Associate Professor) at the University of Tokyo Institute for Cosmic Ray Research (ICRR) has discovered twelve galaxies expelling hot oxygen gas that extends in a cloud up to 250 thousand light years, far beyond the sizes of the galaxies. These galaxies are located 9 billion light years from the Earth. Due to their spatial extent, the researchers have termed these galaxies [OII] blobs or OIIB. Some of these galaxies host a super massive black hole (SMBH), while some show violent star formation with no SMBH. 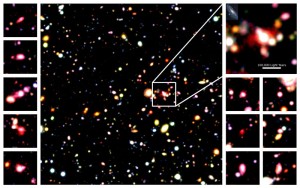 © NAOJ, The University of Tokyo (Suraphong YUMA)
The color composite Subaru images around the largest OIIB1 (center), zoom-in image of OIIB1 (top right), and the eleven other OIIBs (left and right). The size of each small panel corresponds to 400 thousand light years. The picture of Andromeda galaxy (by Robert Gendler) in the top right panel was scaled as if it were at the same distance as OIIB.

The huge amount of energy produced by SMBH or star formation heats up gas in the galaxies, and drives the strong outflow of hot oxygen gas. These distant galaxies are thought to be entering their final phase of galaxy growth, shutting down star formation as the gas required for star formation is depleted. This discovery of large hot expelled gas clouds surrounding elliptical galaxies offers a clue to understanding the mechanism of quenching by which star formation ceases in galaxies.

This is the first discovery of the large physical extent of oxygen-gas outflow driven by energy sources including SMBH and star formation. This research is published in the December 10, 2013 issue of The Astrophysical Journal.