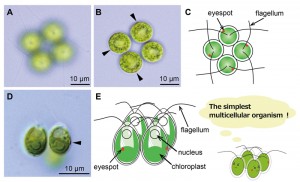 A research group of the Department of Biological Sciences, Graduate School of Science, the University of Tokyo (graduate student Yoko Arakaki, Dr. Hisayoshi Nozaki and colleagues) has unveiled morphological traits that are fundamental to multicellular organisms in the four-celled species named the “happiest alga” (Tetrabaena socialis, called the “happiest alga” because it resembles a four-leaf clover). This alga is one of the colonial volvocalean greens and might have diverged in the earliest period of the colonial volvocalean evolution 200 million years ago. The research group demonstrated that the “happiest alga” has cells that can function as a part of the four-celled individual and forms protoplasmic bridges between daughter protoplasts during embryogenesis in order to determine and maintain the beautiful four-leaf clover shape of the four-celled individual.