Large-scale eruptions often disrupt not only the safety of the local community, but also global trade and commerce, therefore it is crucial to be able to accurately predict eruptions and the duration of the eruption sequences of volcanoes. Images of the internal structure of active volcanoes (e.g., Mt. Asama and Mt. Etna) have been taken worldwide with muography, a radiographic technique for imaging gigantic objects with elementary particles called muons (*1). These images have all been static and thus it has been impossible to capture magma dynamics (movements of magma) inside the volcano. 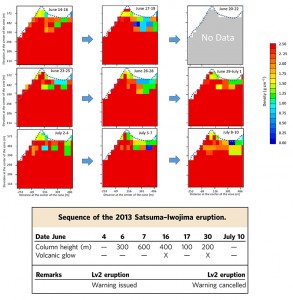 CC-BY © Hiroyuki K. M. Tanaka, Taro Kusagaya, & Hiroshi Shinohara. Nature Communications, Vol.5, No. 3381.
Time sequential muographic animation. The frame rate is 10 frames/month. Volcanic columns (400 m and 200 m) and volcanic glows were observed on the 16th and 30th of June, respectively, and accordingly, magma (orange-red) ascent was imaged on the corresponding dates. After the eruption, magma descended and a vacant area (yellow-green-blue) remained in the top region of the conduit.

However, Professor Hiroyuki Tanaka at Earthquake Research Institute, the University of Tokyo and his colleagues have recently succeeded in producing dynamic muographic images of the ascent and decent of magma during an eruption for the first time. The multi-layerd muography detector (with a signal to noise ratio 100 times improved more than 100 times over existing methods.) captures magmatic movements inside a volcano, necessary for taking animated muographs. Satsuma-Iwojima volcano (the eruption alert was issued by Japan Meteorological Agency on 4th of June 2013) was the target volcano and this animated muography technique confirmed that ascent of the magma head (*2) synchronized to the volcanic glows and columns that emerged during the eruption process (Figure). Decent of the magma after the eruption was also captured.

The research team propose that this new animated muography technique will enable the development of a new volcano eruption monitoring system that improves on the accuracy of existing eruption prediction methods by real-time dynamic processing of data gathered using muography to create a three-dimensional visualization of the volcanic interior.

(*1) Elementary particles (which are present in cosmic rays) similar to electrons, but the mass is 207 times heavier than the electron. The muon decays in 2.2 micro seconds.
(*2) The position of the edge of the magma column in a volcanic conduit.