Cosmic rays are tiny particles that travel around at high speed through space. Many cosmic rays arrive at Earth in a wide range of energies and extremely isotropically, meaning that they arrive from all directions equally. In other words, in observations of cosmic rays, researchers have so far been unable to detect anything special about any particular direction in the universe. 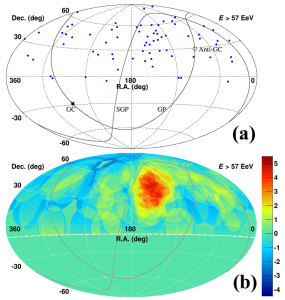 © 2014 R.U. Abbasi et al. (Telescope Array Collaboration)
a) The arrival direction distribution and b) their significance map of the highest-energy cosmic rays in equatorial coordinates. The cluster of events has a statistical significance of 5.1 sigma (19 events were observed, whereas 4.5 events are expected in an isotropic distribution by oversampling using 20-degree-radius circles). Significance in red is larger, whereas that in blue is smaller. The field of view of the Telescope Array detector is the region above the dashed curve. The gray solid curves indicate the galactic plane (GP) and supergalactic plane (SGP).

The Telescope Array (TA), an international research group including the University of Tokyo Institute for Cosmic Ray Research, studied the arrival directions of 72 cosmic-ray events with energies above 5.7×1019 electron volts, which are called highest-energy cosmic rays, using data collected over a 5 year period from 2008 by the surface detector of the Telescope Array experiment that was constructed in Utah, USA, and found an indication of a 40-degree-diameter hotspot emitting an excessive number of highest energy cosmic rays, calculated from their arrival directions located in the northern sky. The size of the hotspot is 6% of the northern sky and the number of events expected for isotropic distribution is 4.5 whereas the observed number is 19, which is about a quarter of 72 events. The probability of the cluster of events, appearing by chance in an isotropic cosmic-ray sky is estimated to be 3.7×10-4.

The highest energy cosmic rays observed by the Telescope Array are an extremely rare phenomenon, with only one observed event expected per year in an area of 100 square kilometers (approximately the area of central Tokyo within the circular Yamanote train line). However, this time, researchers used a ground based particle detector seven times larger in area (roughly equal to the entire Tokyo metropolitan area) than the observation equipment that had formerly been used in the Northern hemisphere. As a result, they were able to obtain several times more statistical events of highest energy cosmic ray phenomena and capture indications of the hotspot.

It is still a big mystery how cosmic rays obtain energies of about 1020 electron volts. By increasing the number of observed events, the Telescope Array will explore the relation of highest energy cosmic rays to extreme phenomena in the universe, which may be the origin of this cluster of events.