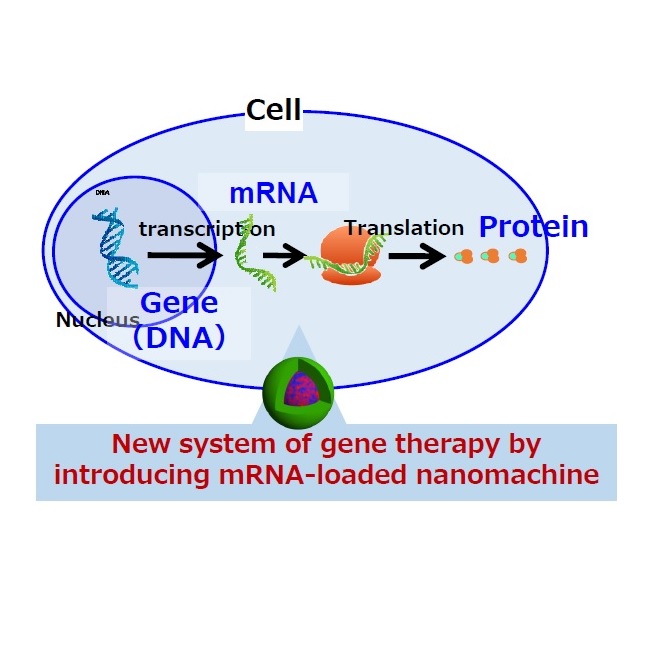 Neurological disorders such as paralysis and Alzheimer’s disease are difficult to cure completely considering the poor capacity of nerve cells to regenerate. Gene therapy is an important treatment strategy because it is possible to cure diseased cells. However, conventional gene therapy techniques such as use of virus vectors and plasmid DNA introduction tend to be difficult in wide clinical applications due to the risk of accidentally inducing mutations in undamaged parts of the genome.

Wild-type messenger RNA (mRNA) is created by transcription from cellular DNA (genes). In this system, instead of administering DNA, artificially created mRNA is introduced into cells to offer a potentially safe and efficient gene therapy. However, mRNA is highly unstable and rapidly degraded in the body, and also strongly stimulates the innate immune system inducing an extremely powerful inflammatory response. As a result, direct mRNA administration into cells has been difficult and there are almost no examples of the application of mRNA as a therapy.

In this study, University of Tokyo Graduate School of Medicine Center for Disease Biology and Integrative Medicine Associate Professor Keiji Itaka, Professor Kazunori Kataoka (jointly affiliated with the Graduate School of Engineering) and their colleagues used a polymer micelle drug delivery system (DDS) to establish a novel mRNA delivery system. Using mRNA for gene therapy, the research group successfully induced tissue regeneration of olfactory nerve fibers and recovery of olfactory function in animals with olfactory disorders. This is the first ever example of successful treatment of a neurological disorder with gene therapy.

These results indicate the feasibility and safety of using mRNA as part of mRNA-based gene therapy and may open the way to applications in many neurological disorders.