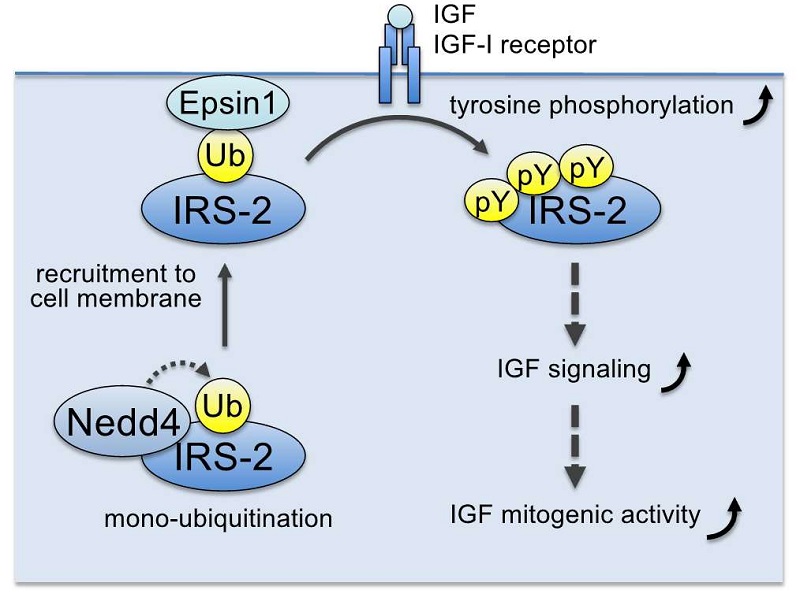 University of Tokyo and Hiroshima University researchers have discovered a new mechanism by which the information carried by the hormone insulin-like growth factor (IGF), which promotes growth in animals, is transmitted within the cell and encourages cell growth.

Insulin-like growth factor (IGF) is an extracellular polypeptide similar in molecular structure to insulin, the hormone that regulates blood sugar levels. IGF induces proliferation of various cell types, and plays important roles in cell growth. It is well known that IGF activities are often potentiated by other hormonal factors and various physiological statuses, which may enable stage- and tissue-specific cell proliferation in the body, leading to normal body growth. On the other hand, excessive IGF activity is frequently observed in cancer cells. In general, IGF binds to the IGF-I receptor in the plasma membrane and induces tyrosine phosphorylation of insulin receptor substrates (IRSs), transmitting the information carried by IGF to the interior of the cell and triggering normal growth.

The research team of Associate Professor Shin-Ichiro Takahashi, at the University of Tokyo Graduate School of Agricultural and Life Sciences, Research Associate Toshiaki Fukushima at Hiroshima University and their colleagues has shown that a single ubiquitin protein is added to IRS (a process called monoubiquitination), enhancing the transmission of the information carried by IGF to the interior of the cell. The team also revealed that cell proliferation and animal growth are brought about through the activation of this same novel machinery. On the other hand, the excess activation of this machinery causes excess proliferation of some cancer cells.

This result not only revealed the molecular mechanism of how IGF signalling is regulated by other hormonal and oncogenic factors, but may also contribute to the development of novel drugs that can target diseases caused by abnormal IGF activity including growth abnormalities and cancer.