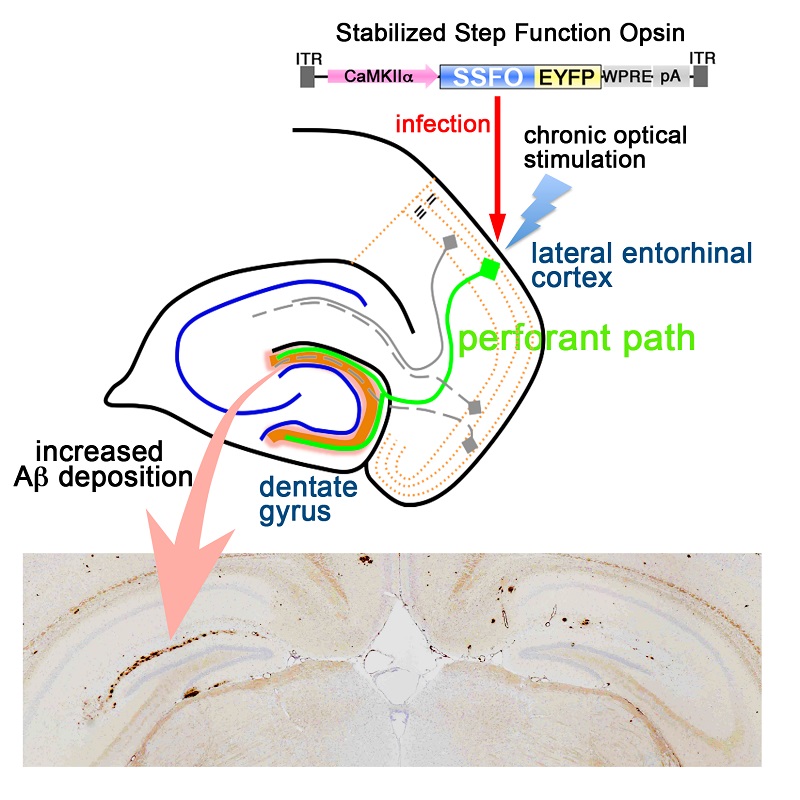 The gene encoding the protein channelrhodopsin, that elicits neuronal activation by optical stimulation, was introduced into the lateral entorhinal cortex of AD model mice. After 5 months of stimulation with light, amyloid β deposition increased in the dentate gyrus of the hippocampus (visualized in brown, arrow), was increased.
© 2015 Takeshi Iwatsubo et al.

An international research group including the University of Tokyo, Stanford University and Washington University has discovered that neuronal activity augments the accumulation of amyloid β that is observed in the brains of patients with Alzheimer’s disease (AD).

The accumulation of deposits of a protein fragment termed amyloid β is thought to be the cause of the development of dementia in AD brains. Neurons in the brain are connected through junctions termed synapses and function by transmitting electrical activity (i.e., neuronal activation). However, the relationship between neuronal activity and amyloid β deposition has not been fully elucidated.

Professor Takeshi Iwatsubo, graduate students Kaoru Yamamoto and Zen-ichi Tanei, Assistant Professor Tadafumi Hashimoto and Professor Haruhiko Bito at the University of Tokyo Graduate School of Medicine, Professor Karl Deisseroth at Stanford University, and Professor David Holtzman at Washington University chronically increased the activity of a neuronal pathway projecting to the hippocampus, an important brain region known to be involved in memory, in the brains of AD model mice for five months, and found that amyloid β deposition increased in the hippocampus. This study was made possible by the use of a cutting-edge experimental technology termed optogenetics that enables the control of neuronal activity using light.

The result of this present study is significant in that it demonstrates for the first time that amyloidβ deposition that is causative to AD is augmented by neuronal hyperactivation over a long period of time. In the future, this research may provide clues to strategies for prevention and treatment of AD through modulation of neuronal activity.