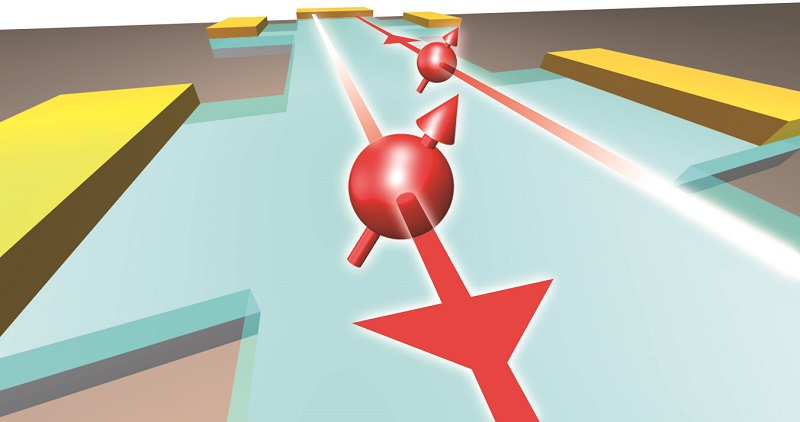 Schematic of the integer quantum Hall effect on the surface of a topological insulator. Massless electrons are flowing at the edge of the sample.
© 2015 Ryutaro Yoshimi.

Topological insulators are an unusual class of materials, which do not conduct electricity in their insulating interiors but only on their surfaces, which is in a metallic state. Their surfaces are in what is termed a Dirac state, populated by massless electrons and holes known as Dirac fermions. Because current flows through topological insulators with almost no loss of energy, their properties are being studied intensively with the hope of creating low-power consumption electronic devices. However, a small amount of conduction through the interior bulk due to impurities and defects in the crystal have, up to now, made it difficult to realize pure conduction in the surface Dirac state.

In the current research, the joint research group of University of Tokyo Graduate School of Engineering Professor Yoshinori Tokura and Professor Masashi Kawashima established a method for the growth of high quality thin film of the topological insulator (Bi0.12Sb0.88)2Te3 (Bi: Bismuth, Sb: Antimony, Te: Tellurium), almost completely eliminating impurities and defects to realize an insulating state inside the film. The research group transformed the films into electric gating devices known as field effect transistors, and measured the Hall resistance, while changing the number of electrons in the sample. By doing this, they were able to show that the resistance became constant at the resistance quantum (approximately 25.8 kOhms), demonstrating the presence of the quantum Hall effect in the material. This indicates that the research group succeeded in realizing pure conductance through the surface Dirac state alone.

These results are expected to find applications in the development of fast and low-power consumption electronics.