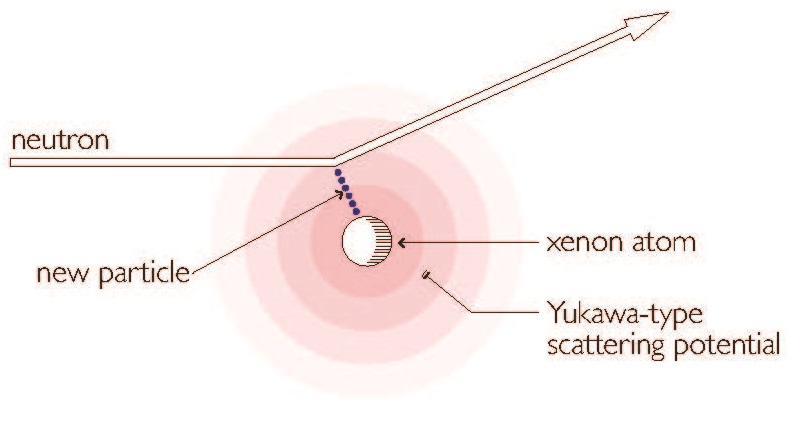 Schematic of neutron scattering off a xenon atom due to Yukawa-type scattering potential caused by the new particle.
© 2015 The University of Tokyo

University of Tokyo researchers have measured the gravity-like force in the nanometer range by precisely measuring the scattering of neutrons off Xenon atoms. The group confirmed that the expected distribution based on known interactions and the distribution determined in the current experiment were extremely accurately matched, further limiting the possible range in which a gravity-like force may exist.

As two objects get closer, the gravitational attraction that acts between them increases in inverse proportion to the square of the distance separating them. For example, if the distance between two objects is reduced by half, the gravitational force acting between them increases four times. However, it has not been experimentally verified if this relation holds even in the microscopic world of atoms and electrons below separations of say 100 microns.

Assistant Professor Yoshio Kamiya of the International Center for Elementary Particle Physics and colleagues, using the small angle scattering neutron beamline at the HANARO research reactor at the Korea Atomic Energy Research Institute, highly accurately measured the scattering angle of a cooled beam of neutrons irradiating xenon atoms. The research group achieved the highest ever search sensitivity for object separations in the range of 0.04 to 4 nanometers.

Inquiries about the content of this page: International Center for Elementary Particle Physics