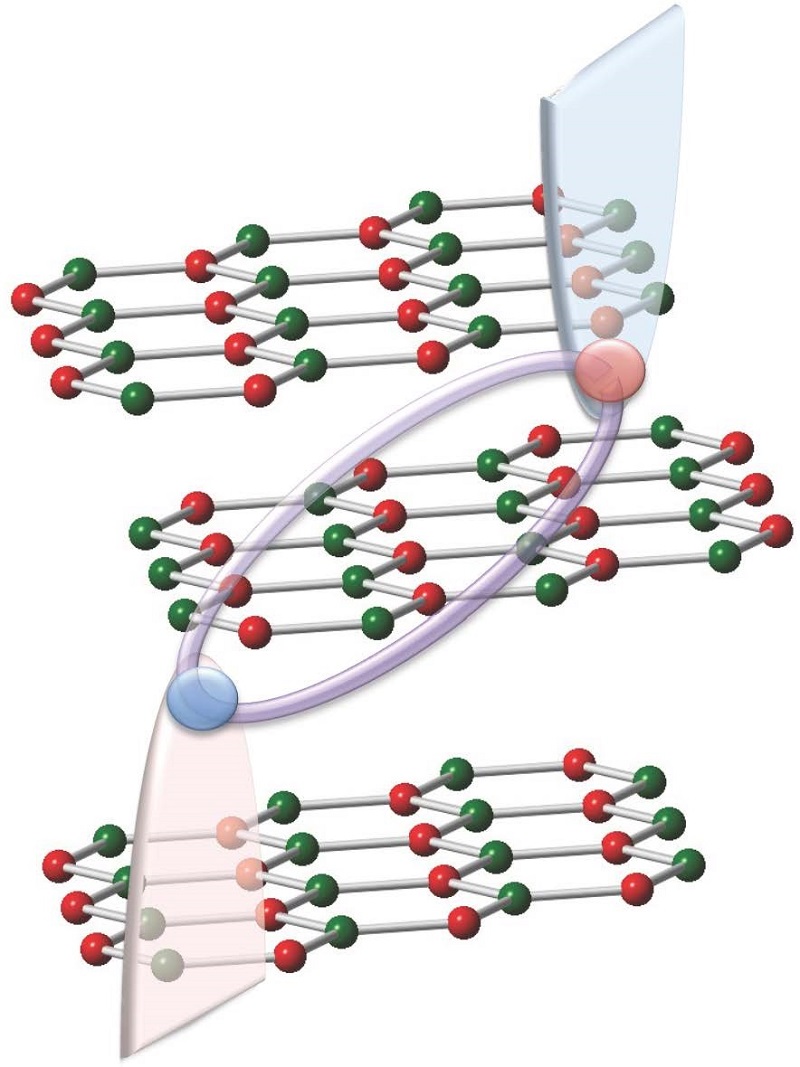 Illustration of the BCS-like exciton state proposed in the quantum limit state of graphite under a strong magnetic field.
© 2015 Masashi Tokunaga

University of Tokyo and Tokyo University of Science researchers have shown that if you apply a strong magnetic field to the honeycomb lattice of carbon atoms in graphite, positive and negative charges form pairs, which may give rise to a superconducting-like state.

It is common knowledge that when electricity flows through a material, energy is usually lost as heat. In the superconducting state however, negatively charged electrons form pairs in the BCS theory of superconductivity to create a new quantum state called a Cooper pair, electrical resistance drops to zero, and current can flow through the material without dissipation of energy. In theory, it is thought that it should be possible to create what is termed an exciton BCS state by forming pairs of oppositely charged particles (excitons) instead of same-charge electrons. Researchers have spent the last fifty years attempting to realize this state.

Graduate School of Science graduate student Kazuto Akiba and his coworkers at the Institute for Solid State Physics (ISSP) at the University of Tokyo, in collaboration with Professor Hiroshi Yaguchi at the Tokyo University of Science, carefully studied changes in the electronic and magnetic properties of graphite in high magnetic fields. They realized the world’s highest-class of high field environment using state-of-the-art pulse-magnets developed at ISSP, and achieved results that suggest the emergence of a BCS-like excitonic state in graphite at magnetic fields higher than 53 Tesla.

The superconducting state of electron pairs has been widely or increasingly used for MRI, maglev trains, and electrical power transmission. The basic properties of the excitonic BCS-like state suggested by this research remains shrouded in mystery. Further studies to make clear its origin are highly desirable.

The Institute for Solid State Physics