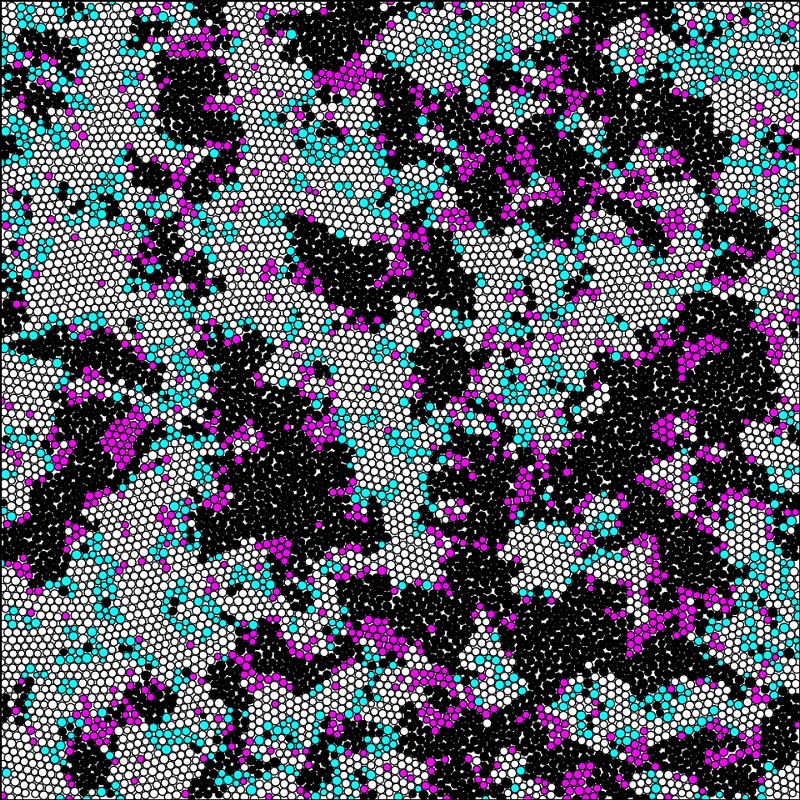 A University of Tokyo research group has demonstrated through computer simulations that the enhancement of fluctuations in a liquid’s structure plays an important role as a liquid becomes a solid near the glass-transition point, a temperature below the melting point. This result increases our understanding of the origin of the glass transition and is expected to shed new light on the structure of liquids, thought until now to have been uniform and random.

Normally, a liquid changes to a solid when its temperature becomes lower than the melting point. However, some materials remain liquid even below the melting point, finally solidifying with further cooling (supercooling) at what is called the glass-transition point. Despite intensive research over the years, its physical mechanism has remained elusive. One possibility is that increasing structural order develops in a supercooled liquid upon cooling, increasing the size of that structure and thus slowing down the dynamics and leading to the glass transition.

Because the structure of liquids that undergo a glass transition is disordered, it was difficult to detect fluctuations of such a structure, but a new method has been proposed recently. This method does not depend on the type of liquid structure and has attracted much attention as it may enable extraction of structure size, which is key to understanding slow dynamics, for all liquids.

The research group of Professor Hajime Tanaka and Project Research Associate John Russo at the Institute of Industrial Science, the University of Tokyo, were only able to retrieve the separation distance of two particles using this method, finding instead that this method fails at extracting the correlation between more than two particles (many-body correlations) which are key for understanding the glass transition. In a liquid composed of disk-shaped particles that do not deform no matter how much force is applied (a hard disc liquid), it is apparent that the dynamics of the liquid are dominated by a hexagonal lattice structure that is impossible to extract using this method.

“These findings not only support the physical mechanism proposed by this group that slow glassy dynamics is a consequence of the development of structural fluctuations in a supercooled liquid, but also provides a new insight into the liquid phase, which was believed to be uniform and random, and leads to a deeper understanding of the very nature of the supercooled liquid state,” says Professor Tanaka.