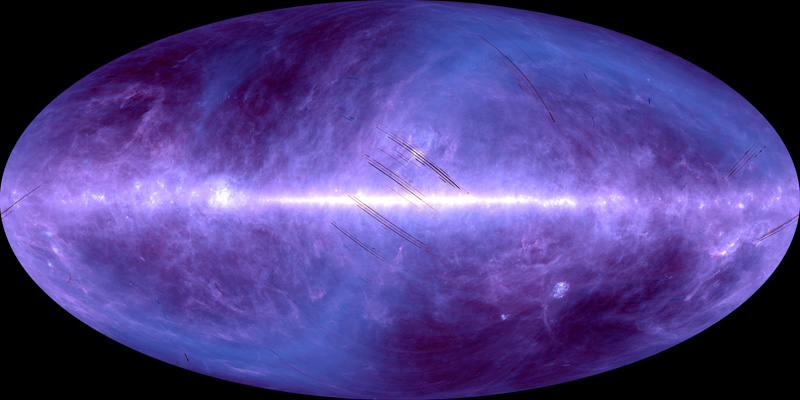 Far-infrared all-sky image observed by AKARI
Represented as a two-color synthesis of blue: 90 micrometers and red: 140 micrometers. The Milky Way extends horizontally as the direction to the center of the Milky Way Galaxy is at the center of the image. The pale-colored, S-shaped part represents light from dust in the solar system. AKARI observed more than 99% of the entire sky to construct a detailed far-infrared all-sky map. The unobserved part of less than one percent is seen as black streaks on the image. Bluer areas indicate warmer interstellar medium, whereas redder areas are colder. It shows that more stars are being formed in the areas of warmer interstellar medium.
© ISAS/JAXA.

A research group led by a University of Tokyo researcher, using the AKARI satellite’s Far-Infrared All-Sky data, have created all-sky image maps and released the full database to researchers around the world via the Internet.

Assistant Professor Yasuo Doi at the Graduate School of Arts and Sciences and his collaborators using infrared data acquired by AKARI, created complete all-sky image data at the wavelengths of 65, 90, 140 and 160 micrometers with a resolution of 1 arcminute to 1.5 arcminutes (1 arcminute is 1/60th of a degree). The new AKARI image maps have four to five times better resolution than that of conventional far-infrared all-sky images, as well as data at longer wavelengths.

The AKARI image data are expected to contribute to a very wide variety of astronomical studies, for instance in areas of star and planet formation and galaxy evolution. Furthermore, closer examination of the temperature and distribution of the interstellar medium allows us to measure precisely cosmic background radiation, which is essential to investigate the origin of the universe.

Department of Earth Science and Astronomy, Graduate School of Arts and Sciences