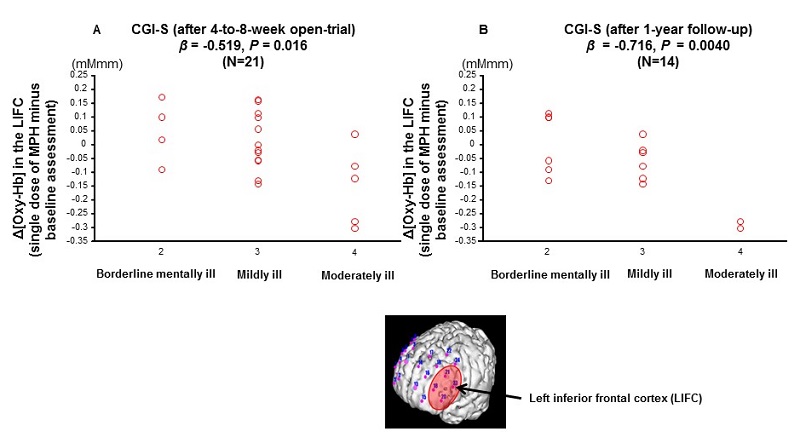 Change of NIRS signal before and after oral administration of MPH
A correlation was shown to exist between clinical assessment scores (after 4-to-8-week open trial and after 1-year follow-up) and change in near-infrared spectroscopy (NIRS) signal after a single dose of MPH. The larger the increase in NIRS signal after a single administration of MPH, the larger the clinical improvement after long-term use of MPH.
© 2015 Ayaka Ishii-Takahashi.

Researchers at the University of Tokyo have shown that it using the change in signal obtained from near-infrared spectroscopy (NIRS), it is possible to predict the efficacy of long-term use of methylphenidate hydrochloride (MPH), a pharmaceutical therapy for child attention deficit hyperactivity disorder (ADHD).

MPH, a drug used for treatment of ADHD in children, it has been reported to ameliorate symptoms in approximately 70% of children with ADHD. However, the side effects of the drug, such as decreased appetite and impaired sleep, are thought to affect children’s growth. Therefore, some studies recommend reducing the dosage as much as possible for children in whom an amelioration of symptoms is not seen.

Although MPH is effective, it is associated with the problem of drug avoidance due to fears concerning drug dependence and side effects; thus, making amelioration of symptoms impossible in these cases. Therefore, the use of an objective biomarker to predict drug efficacy before continued administration could possibly solve these problems.

The research group of Assistant Professor Ayaka Ishii-Takahashi and Associate Professor Yukiko Kano of the Department of Child Neuropsychiatry and Professor Kiyoto Kasai of the Department of Neuropsychiatry at the Graduate School of Medicine conducted a randomized controlled trial on children with ADHD using NIRS, a safe and simple method to examine brain function. Comparing the therapeutic effects after 1 month of continued MPH administration with the increase in NIRS signal before and after a single dose of MPH, they found that a larger increase in NIRS signal was associated with better therapeutic outcome. Similar results were obtained for the therapeutic effects of MPH 1 year after administration. These results indicate that it may be possible to predict the long-term effects of MPH based on the changes in NIRS signals before and after administration of a single dose.

The results of the present study showed that NIRS performed before continued administration of MPH may be predictive of its therapeutic effects in ADHD. In the future, this method to permit treatment options that are not burdensome to children with ADHD and their family members.